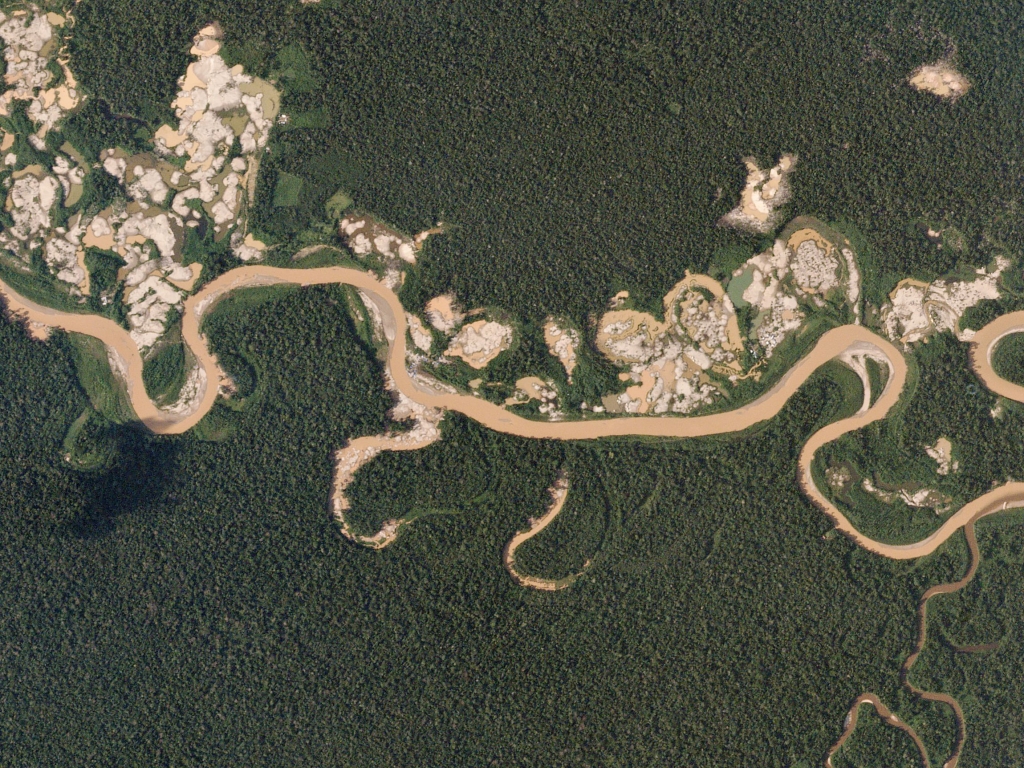 The southeast region of Madre de Dios in Peru has been exploited for its abundance in gold. Over the past decade, profits have risen by 360% for gold mining (Amazon Conservation Association, 2019). With higher profits there is a greater incentive for people to partake in illegal mining of this resource. The rise in illegal mining has led to deforestation and pollution of the Amazon. The Amazonian region, Madre de Dios, has experienced the greatest amount of this environmental abuse because of the high levels of gold. As of early March 2019, the Peruvian government has expressed concerns for the rising levels of illegal mining and simultaneous rise in environmental destruction. To combat these problems, the Peruvian government has chosen to enforce the law in the Madre de Dios region by equipping the area with military personnel and police officers. The goal is to decrease levels of illegal and criminal activity, given this area is home to illegal miners, as well as other criminals, prostitution, and mercury trafficking (Cereceda, 2019).

Various parts of the Amazon have been mined for gold, but the Madre de Dios region has endured the most severe effects of illegal gold mining. Destruction of the forest is seen through deforestation and contamination of water sources. The small-scale illegal miners use mercury to separate gold particles from the ore in order to obtain gold. High levels of mercury are exposed to the local population and animals. Mercury is toxic, and it is estimated that about 30-40 tons of mercury are released into the Madre de Dios region each year. Specifically, within this region, 78% of the residents live with unsafe levels of mercury within their system  (Amazon Conservation Association, 2019).

The effects within Madre de Dios are higher than other regions due to weak governance and political establishment. Illegal mining has been disregarded and unregulated for about a decade. Prior to the Peruvian government’s current attempt to regain control of the situation, the Amazon Conservation Association had acted against this problem. They worked to provide economic alternatives to illegal mining, assisted those who had been displaced by illegal miners, increased public awareness of the issue, and encouraged government officials to limit the problem  (Amazon Conservation Association, 2019).

Nonetheless, the Peruvian government has attempted to regulate illegal gold mining in the past. For instance, in 2010, the government passed a different law that aimed to limit illegal exportation of gold. They established a law that criminalized the exportation of gold without the receipt that can only be granted by legal miners. However, this law has not been effective due to the ease of obtaining fake receipts. Another problem is that many legal companies have been found guilty of exporting large amounts of illegally mined gold (Kleinhenz, 2017).

Therefore, in order to combat the illegal mining problem, the Peruvian government has stated that they intend to open four military bases within Madres de Dios. They have begun the militarization of this region in the zone that consists of the highest levels of illegal mining, La Pampa. Most of the agricultural fertility of this zone has been transformed into a mercury dominated waste land with many casinos, brothels, and criminal activity. To reinstate the law into the community, La Pampa has been equipped with about 100 military personnel, 50 police officers, and one prosecutor (Cereceda, 2019).

Aside from the military methods of decreasing illegal mining, Peru has also demonstrated their commitment to limiting environmental degradation by joining the global alliance known as the Tropical Forest Alliance (TFA) in January 2019. Through this alliance, Peru has committed to working with multinational corporations in establishing sustainable programs that promote reduction of carbon emissions and deforestation. Also, TFA works to increase investments from companies that are interested in production without deforesting the Amazon. This is significant for Peru since the deforestation of their forests has generated about 51% of their total greenhouse gas emissions. Through TFA, Peru has aimed to reduce deforestation by 30% in the Amazon by 2030 (Peru se compromete, 2019).

As the demand for gold has risen on the global market, the Peruvian exportation of gold has simultaneously risen. Nonetheless, the area that is being affected, the Amazon, makes up 60% of Peru’s biome (The Associated Press, 2019). Thus, it is crucial that the government establishes regulations and rules in order to maintain the environment of the rainforest. Thus, when one region falls to the control of illegal miners and other criminals there is a clear need for the government to step in and regain control. The social issues of illegal mining are significant, as forced human labor and trafficking are established in these mining towns by the criminal groups that dominate them. Thus, in order to decrease environmental exploitation, as well as organized crime in Peru the government is acting against the illegal mining that has dominated many parts of the Amazon.

The past movements that the Peruvian government has promoted were ineffective in reducing illegal mining due bureaucratic incompetence, which has made the process of obtaining legal mining rights very difficult and lengthy. Thus, many people chose to mine illegally. The Peruvian government aims to fight corruption by reducing illegal mining, but the problem will continue to persist until alternative methods for economic income are presented, or the process of mining legally becomes more efficient. Nonetheless, illegal mining brings Peru one to three billion dollars per year and is no small contributor to the economy. The formalization of this industry will need to focus on increasing sustainable, legal methods of small-scale mining that reduce environmental degradation. If done right, small-scale mining can be a benefit to the Peruvian economy while maintaining sustainable, environmentally friendly methods. The current practices do need to be eliminated, as they are harmful to society and the environment. The Peruvian government has introduced military enforcement, but that should not be the only method of limiting these problems that they use (Kleinhenz, 2017).