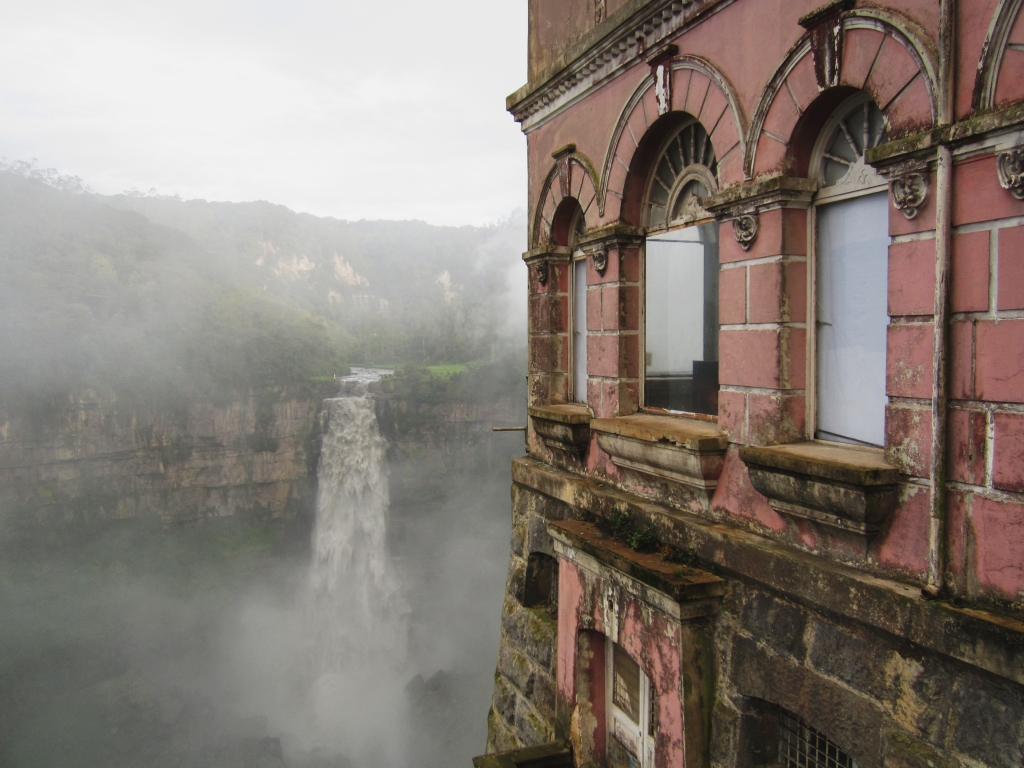 The Bogotá River is a major source of water for Colombians in the province of Cundinamarca, which surrounds the country’s capital. It flows from the northeastern border of the area, skirts around Bogotá, and drops 515 feet at the magnificent Tequendama Falls. The Bogotá ends in southwest Cundinamarca, where it drains into the Magdalena River. Unfortunately, the Tequendama Falls have been known as “the largest wastewater falls in the world,” according to Canada’s International Development Research Center. By the time the Bogotá passes through the capital, its waters are visibly toxic. The falls, located just beyond the city, were once a major tourist attraction for Bogotans. Over recent years, the rotten scent of pollution has driven tourism away.

All the way upstream, the small, rural municipality of Villapinzón is grappling with pollution at the river’s source. Colombia’s highest court, El Consejo de Estado, issued regulations in 2014 in an attempt to resolve the enormous pollution of the Bogotá River. The pollution is largely a result of inadequate or nonsexist sanitation systems in municipalities along the river, as well as the fact that many homes and businesses are built right along the water’s edge. The lack of clean water has also generated health problems in the region in those consuming the untreated water or the animals living in it. Because of its location and reputation as a major polluter, Villapinzón is facing perhaps a disproportionate amount of pressure. It is home to dozens of small-scale tanneries using environmentally-damaging methods of cleaning and dying their products, as well as homes and other businesses right at the river’s edge, all of which dump their untreated waste directly into the Bogotá only kilometers from its source. This pattern is then compounded in each subsequent municipality, leaving the river unsafe for wildlife and human consumption even before it reaches the capital with some 8 million inhabitants.

Last spring semester, 12 students in one of GSPIA’s capstone courses, Policy Planning in Developing Countries, were led by Professor Marcela González Rivas on a new project in cooperation with students from Bogotá’s Universidad de los Andes. The students in Colombia have been working with Villapinzón’s local government for over a year now to assist that municipality’s development, and the 2014 river regulations offered additional challenges that the GSPIA team hoped to help address. The class traveled to Colombia over spring break to meet the students and those in Villapinzón, and to see first-hand the broad scope of challenges that single town is facing.

In order to focus their efforts, the GSPIA students structured the class with three different operational teams: one focusing on wastewater sanitation, another on clean drinking water supply, and the third on river restoration. Before leaving for Colombia, the class met with officials in these same fields here in Pittsburgh. They hosted a representative from the Alcosan wastewater treatment facility, toured the Pittsburgh Water and Sewage Authority’s drinking water plant along the Allegheny, and spoke with members of Friends of the Riverfront responsible for restoring the city’s urban shores. The portion of the project before the field work in Colombia consisted of combining these interviews with research on relevant water management cases from around the world, and extracting useful ideas to present to the students at Universidad de los Andes and by extension the local authorities in Villapinzón. After arriving in Colombia, the students met with the issue’s various stakeholders. They were hosted by the Colombian Ministry of Housing and Cundinamarca’s officials responsible for environmental regulation; they toured Bogotá’s El Salitre waste water treatment plant and also a small water treatment plant in Villapinzón; they heard from some of the country’s leading experts on the issue at Universidad de los Andes; they met managers of affected sites in Villapinzón, such as a tannery and a major farm; and of course, they spoke with the town’s leadership, including one of its secretaries and the mayor.

However apparent the project’s complexities were at first, they were confirmed when the class visited Colombia in March. Just in Villapinzón alone, the problems of water management are entangled with many related problems at almost every level. To make matters worse, this is the case in every other rural municipality in the department affected by these new regulations. The tanneries and other businesses located at the river’s edge, for instance, must be relocated further away or demolished—but oftentimes these structures double as homes, and the inhabitants do not have the proper permits to relocate them or receive funding to help them do so. Additionally, the infrastructure needed to properly decontaminate drinking water and sewage, which was the focus of the class’s research, is expensive. Rural municipalities like Villapinzón rely on the central and departmental government to fund the creation of these systems, but they must compete with one another to receive limited money. Many of them, including Villapinzón, have not demonstrated the organizational capacity necessary to even develop proposals for such projects, which is the first step in implementing them.

This year’s GSPIA delegation came up with preliminary suggestion based on its research and field work experience. They are primarily based on low-cost solutions for Villapinzón’s mostly rural population, which does not receive universal access to clean water or sewage systems. There is also an emphasis on innovative governance and cooperative approaches that unite citizens with their leadership, and municipalities with one another, to counter Colombia’s decentralized governance structure that essentially leaves every town for itself in developing this critical infrastructure. Details about these solutions can be found in the class’ report, titled "Preparing for the Future: Challenges and Solutions for Restoring the Bogota River in Rural Colombia."

Villapinzón’s problems are the product of many years of buildup, and they will continue to persist well into the future. But while the federal regulations insist that the Bogotá River be completely clean by 2044, they give Villapinzón and other small municipalities only a few years to resolve problems that took decades to develop. Therefore, students at Universidad de los Andes and here at GSPIA have a great deal of work to continue. It will be up to future classes to build off of what has been started and create concrete solutions to help those in Villapinzón and the surrounding region reclaim their primary source of water. For those of us who had the opportunity to participate in GSPIA’s first semester on the project, we will continue to appreciate the value of that experience in preparation for our professional careers. We wish future classes here and in Colombia good fortune in continuing forward.

Jesse Smith
Jesse is a 2015 alumni of the Graduate School of Public and International Affairs. He received an MPIA in Security and Intelligence Studies, as well as a graduate certificate for Latin American Social and Public Policy.