Constitutional Debate in Mexico: The Experience of Iturbide's Empire (1821-1823) 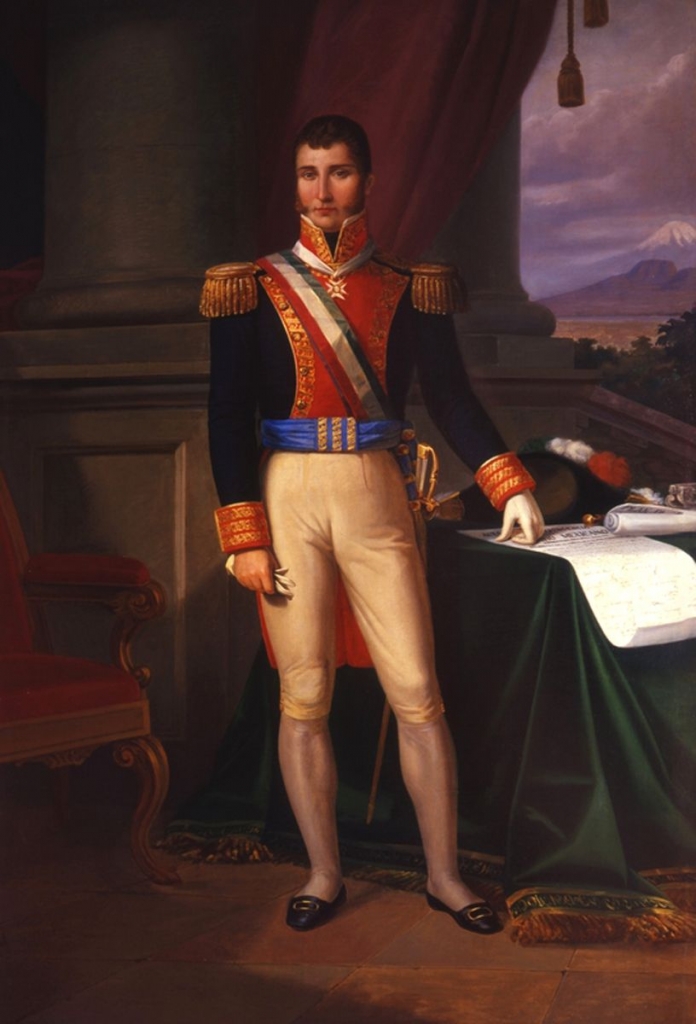 Mexico is a country with a rich constitutional history.[1] The first constitution enacted in Mexican territory -when it was still called New Spain- was the 1812 Spanish Constitution. In 1814, insurgent rebels published their own rival constitution in Apatzingán (in the present day state of Michoacán). Once Mexico achieved independence in 1821, political debate assumed that the first challenge for the new nation was the drawing up of constitution. Between 1821 and 1823 these discussions were carried out within the context of the Mexican Empire and the government of Agustín de Iturbide, first as regent and later as emperor. After Iturbide’s fall in 1823, plans for a republican constitution were developed. This led to the 1824 Federal Constitution. This text quickly became discredited and was replaced with the Seven Laws in 1836. A further constitution – the Bases Orgánicas- was produced in 1843 but was as unsuccessful as its predecessors. In 1847, the Federal Constitution was re-enacted with a number of important reforms, but did not survive many years. During the 1850s and 1860s political rivalry over the constitution led to civil war and culminated in the French Intervention of 1863. After the French defeat, the liberal project: the Federal Constitution of 1857 was re-established and became the first Mexican constitution to enjoy almost complete legitimacy among the political elite. The Revolution at the beginning of the twentieth century led to the reform of this Constitution and its subsequent transformation into the 1917 Constitution, soon to reach its first centenary.

Historiography has generally regarded Mexican constitutionalism in the nineteenth century as essentially derivative. When studying the 1824 Constitution, debate has centered on whether this text copied the US Constitution’s federal system and the division of powers, for example. In the case of the Seven Laws, discussion has focused on the ideological foundations of the unusual fourth branch: the Supreme Conservative Power. In recent years, the debate has moved on to examining the Hispanic roots of Mexican constitutionalism. As a result, one of the most popular hypothesis at the moment posits that the 1812 Spanish Constitution is the real inspiration for the 1824 text. This emphasis on identifying the origins of Mexican institutions often minimizes or ignores domestic debate. More often than not, it fails to examine the constitutional proposals that circulated during the nineteenth century in any depth.

When the study of the constitutional proposals made by Mexican politicians in the nineteenth century is undertaken in detail, it becomes clear that Mexico was never a passive receptor of outside ideas. Instead, it turns out that Mexican politicians acted exactly like their homologues in the Unites States, France or Spain when drawing up their constitutional plans. That is, they investigated the body of literature and current examples of functioning or former constitutions; they discussed contemporary political theory and its implications for the construction of governmental institutions; they considered the political circumstances and needs of Mexico; and, then, on the basis of this research, they drew up plans for what they believed would be the most workable constitution. Thus, far from acting as ignorant provincials aping at the US or France, and far from being only cognizant of Spanish law and practices, they were actually well-informed and up-to-date on contemporary constitutional ideas.

A good example of the richness of Mexican constitutional debate in the nineteenth century can be found in the political plans and projects discussed during Iturbide’s empire. The different constitutional plans that circulated in 1822 demonstrate that their authors were familiar with not only the 1812 Spanish Constitution, but also the French revolutionary constitutions, the idea of the British balanced constitution and the US charter of 1787. The plans and their accompanying presentations also reveal a close acquaintance with the political ideas of Jean-Jacques, Rousseau, Thomas Paine, Emmanuel Sieyès, Benjamin Constant and Jean-Louis De Lolme amongst many others.

As a result of this diversity, the different constitutional projects suggested radically different governments for the new Empire. Their only real agreement rested on the rejection of the division of powers established in the Cadiz Constitution. A unicameral legislative power was unilaterally rejected and most proposals wished to curtain some of the lower chambers’ prerogatives. Experience of the Cadiz constitution had convinced Mexican politicians that a unicameral legislature had few effective checks on its actions. As Iturbide argued in November 1821, a partial executive veto had not been sufficient to keep the legislators in order.[2]

The projects can be divided into three groups. In the first are those plans which essentially proposed reforms to the Cadiz Constitution. They assumed the Mexican body politic was the reunion of its inhabitants and favored the principle of national sovereignty. Among the reforms they proposed were the addition of a Senate to the legislative power, the curtailing of monarch’s powers of veto and the elimination of the Royal Council (a consultative body integral to the executive power). A popular idea within this group was entrusting the Senate with special powers to oversee the correct functioning of the constitution. For example, lawyer Juan Wenceslao Bárquera, suggested it be awarded the faculty to judge the constitutionality of the legislative and executive branches’ actions. He also thought that the Senate should be charged with the guardianship of the constitution and its reforms. This institution should be able to decide when “all judicial and legal formalities had been met” during the process of reform and to convene an assembly in which to discuss them.[3]

A second group of constitutional proposals openly rejected the principal of national sovereignty enshrined in the Cadiz Constitution and the revolutionary French charters. For example, Antonio José Valdés, a close collaborator of Iturbide, preferred to establish a system “in the manner of England” in which the division of powers sought to balance the governmental branches’ prerogatives, gave the monarch a complete veto of law bills emanating from the legislative power, and envisaged the political nation as a collection of corporations and interest groups.[4]

This meant that he recommended a two-tier legislative power, in which the citizenry was represented in the lower chamber, but the upper chamber was made up:

The imperial princes over the age of twenty-five, [...] all the Empire’s archbishops [...], twenty-four individuals named by the emperor from amongst the secretaries of state, the state counsellors, bishops, ambassadors, military generals, nobles, intendents [political heads of the provinces], magistrates [...] [and] a senator for each province named every five years by the Provincial Deputation from amongst hacienda owners, merchants, miners, lawyers and clergy.[5]

Much historiography has assumed that plans like that of Valdés revealed Iturbide’s plans to establish an Empire akin to that of Napoleon in Mexico. However, Valdés’s proposals appear to suggest that the British monarchy was more popular within Iturbide’s circle.

In contrast to all other proposals, the plan presented by ex insurgent Francisco Severo Maldonado rejected all contemporary constitutional models and as such, requires a little more explanation.[6] Maldonado proposed the creation of political system in which all citizens were equal; not just in political rights, but also, in prosperity and education. In his texts, he declared that “the art of giving [liberty] to the people can be reduced, in the last instance, to the division of the totality of national property amongst them, without this, equality cannot be maintained [...] nor can liberty”.[7] Maldonado also thought that direct popular participation in government was the key to stability.

As a result, he imagined the body politic as a voluntary association into which all males above the age of sixteen could enrol. This association was to be divided into “political and military” corporations formed of ‘all individuals with the same state, profession or mode of living’. In each (unspecified) locality there would be corporations of labourers (compromising of property-owners, sharecroppers and ranch hands); miners (owners and all those employed in mining); merchants; artisans divided by their office; and, domestic employees.[8]

For its part, the executive power would be made up of the emperor and his ministers, plus an administrator for each level of government: provincial, district and municipality, a nationalised Church, and the regular army. The judicial power was formed of judges and magistrates. Here it should be noted that judicial jurisdictions were to correspond to the different corporations individually.[10]

The executive power was only to be concerned in administrating the law. Its members were to take no part in legislation. There would be no executive veto. Law bills were to be discussed by the national assembly. Once they had been approved they were passed down to the provincial, district and municipal assemblies. It would be the responsibility of these congresses to print and circulate the bills amongst the population. Citizens who wished to pass comment or object to the bill were to be invited to do so by addressing the one of the congresses with their arguments in writing within fifty days of the bill’s publication. When the bill was discussed in the provincial, district and municipal congress, all those who had submitted text were to be invited to attend the congressional discussions on the subject (it is not clear if they were to be allowed to speak). District and municipal congresses should pass the results of their discussion to the provincial congress. Here the bill was voted on after listening to the different representations from the lower assemblies and those submitted privately by citizens. Each bill must receive the approval of two thirds of the provisional congresses in order to become law.[11]

None of the constitutional proposals discussed during Iturbide’s Empire made it to the statute books. However, the discussions that took place between 1821 and 1823 cast a long shadow over subsequent constitutional ideas and arguments made during this time would reappear again and again during the nineteenth century. It is time they were given the recognition they deserve in the rich tapestry of Mexican constitutional history.

Cath Andrews
Catherine Andrews obtained her Ph.D. in Mexican History at the University of St. Andrews, Scotland in 2001. Her principal line of research is Nineteenth-Century Mexican Constitutional History . She also studies the political history of Tamaulipas and Mexico’s North East. She has lectured in various Mexican universities and is currently holds a professorship in the History Division of the Centro de Investigación y Docencia Económicas (CIDE) in Mexico City. Webpage: http://www.catherineandrews.wordpress.com