Horton Cracks the Egg: Dr. Seuss's Racism Is On Full Display As He Enters the Latin American Market 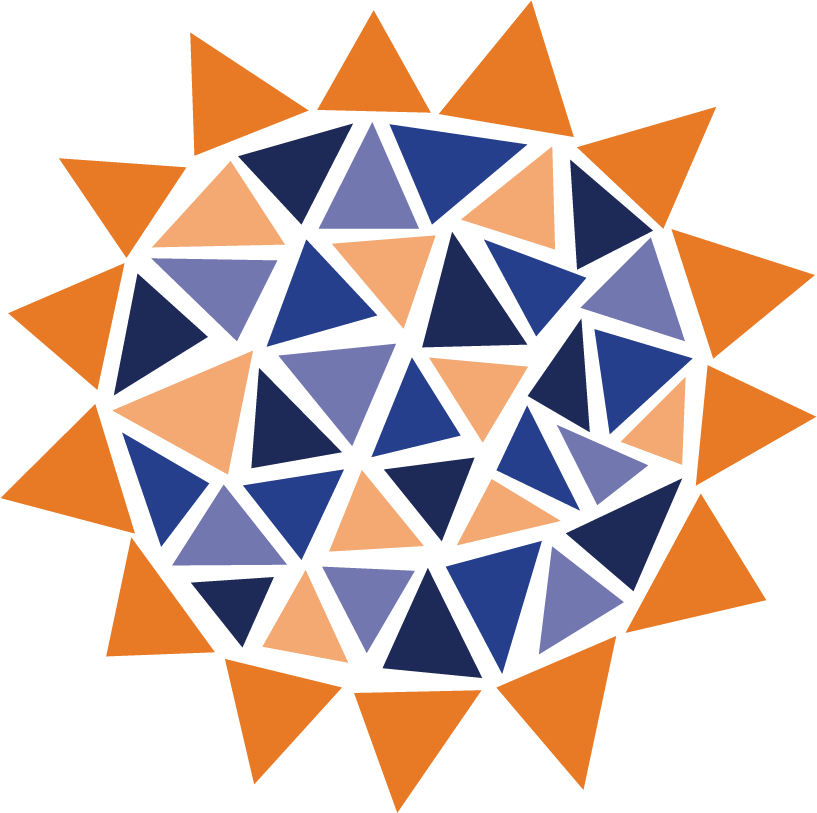 In September 2020, it was announced that Dr. Seuss Enterprises would partner with Exim, one of Latin America’s largest licensing agencies, to increase brand awareness in Mexico, Chile, and Peru (License Global, 2020). The marketing firm Pinta will also support Dr. Seuss Enterprises within the Latinx market in the United States (License Global, 2020). Much of Dr. Seuss’s work is meaningful to populations all across the United States especially: he is an important figure in the literary world, and his work has taught millions of children to read. However, with worldwide tensions spiking because of a more polarized world—for example, the Black Lives Matter movement and the racial profiling at the hands of the police in the United States, and the extreme anti-Asian xenophobia—the literary world has been questioning its support and promotion of the beloved children’s author.

Theodor Seuss Geisel was a writer and cartoonist with over 60 published books. His first published book was And to Think That I Saw It on Mulberry Street in 1937 (Biography, 2021). Dr. Seuss’s articles and illustrations were published in multiple reputable magazines, such as LIFE and Vanity Fair (Biography, 2021), and many of these illustrations propagated problematic stereotypes and caricatures of people and cultures. One of his most infamous political cartoons, for instance, suggested that Japanese Americans were a threat to the United States after the attack on Pearl Harbor. The cartoon, titled “Waiting for the Signal From Home,” depicts racist caricatures of Japanese Americans picking up blocks of TNT, with the connotation that they are going to use the TNT on the United States. 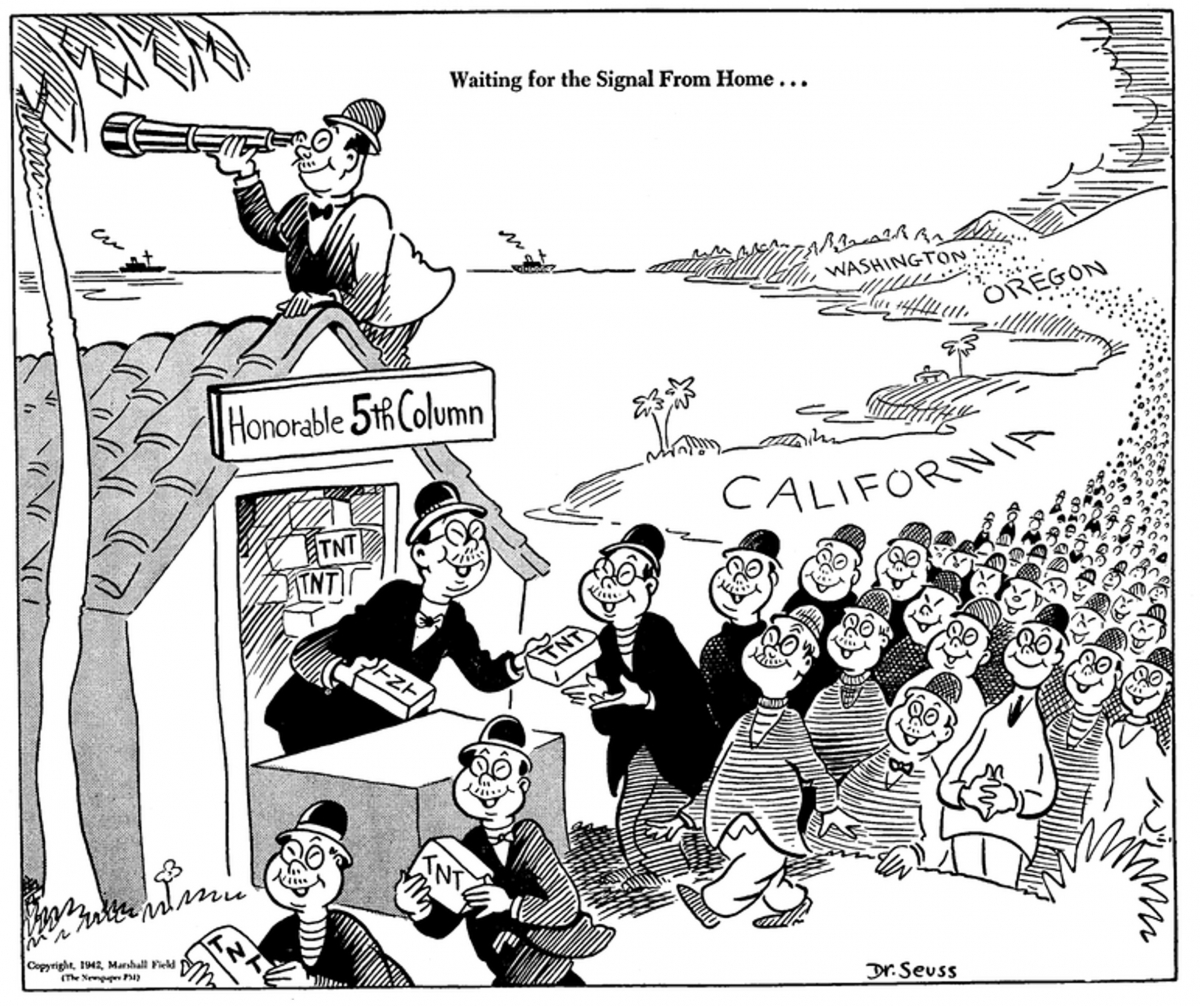 Another cartoon—one of many—uses the slur “J*p,” and its title replaces the letter R with the letter L to mock the way Japanese people speak. 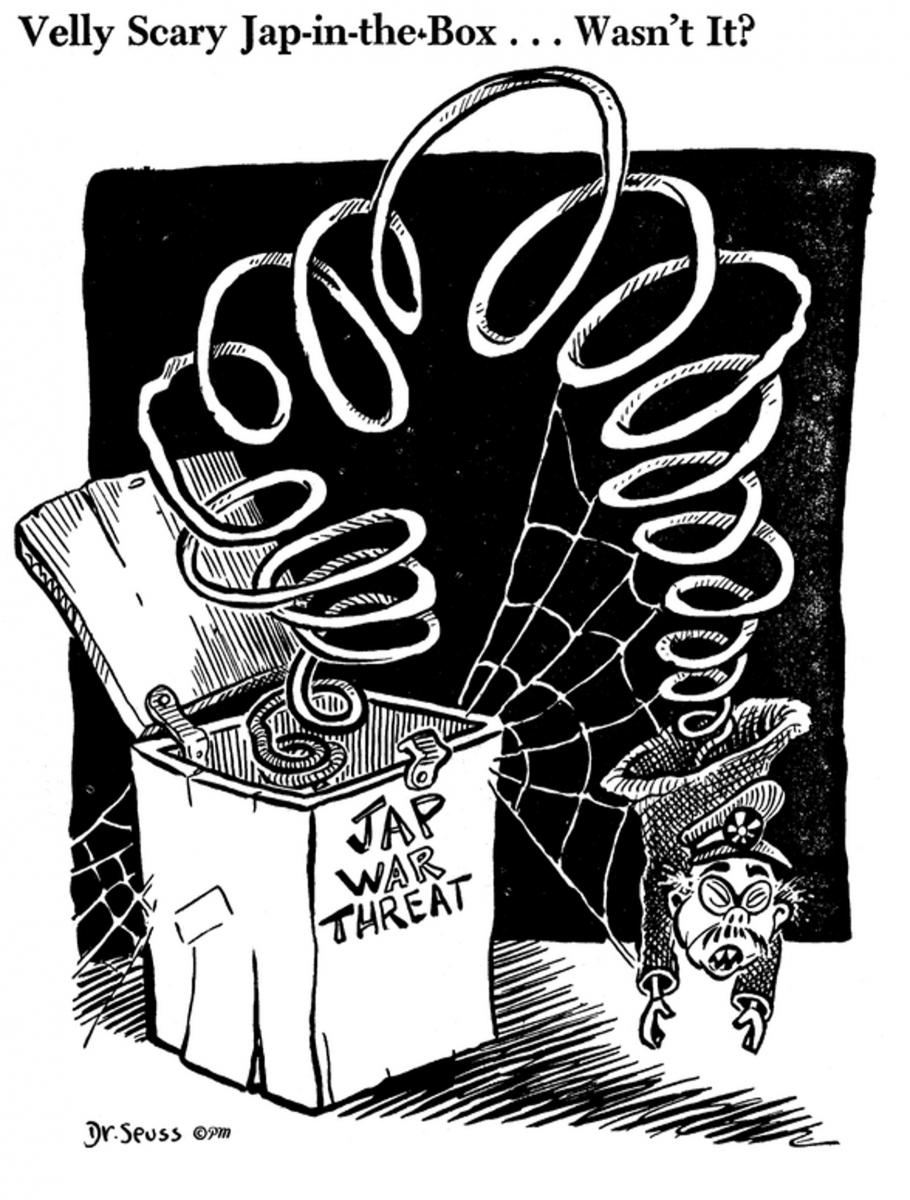 Additionally, books like And to Think That I Saw It on Mulberry Street and If I Ran the Zoo featured derogatory depictions of other cultures by way of blatant stereotyping and racist imagery. 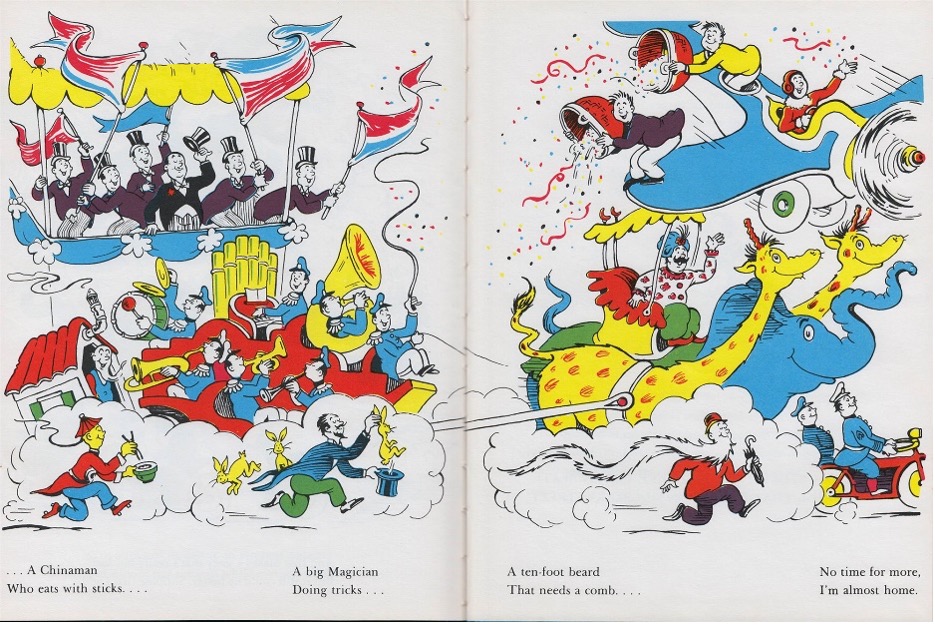 Figure 3. A spread from Dr. Seuss’s And to Think That I Saw It on Mulberry Street showing a caricature of a Chinese man.

Researchers Katie Ishizuka and Ramón Stephens assessed 50 of 59 Dr. Seuss children’s books, and of all the 2,200+ characters, only 2% of the population consisted of people of color (Ishizuka & Stephens, 2019). Of these 2,200+ characters, “every person of color in his children’s books are depicted through racist caricatures” (Ishizuka & Stephens, 2019, p. 33), and he only approved minor edits to one of those characters. After consultation with audiences including teachers, academics, and specialists in the field, Dr. Seuss Enterprises decided to cease publication and sales of 6 Dr. Seuss books that include racist and insensitive imagery (Pratt, 2021). “Ceasing sales of these books is only part of our commitment and our broader plan to ensure Dr. Seuss Enterprises’ catalog represents and supports all communities and families,” says the company (Pratt, 2021).

Critics of “cancel culture” often use the argument that erasing history is wrong. However, Dr. Seuss’s work is not at risk of being erased from history—it’s simply being redefined as “evidence of outdated attitudes grounded in racial denigration and stereotyping that no longer have a place in popular culture” (Patterson, 2021). In fact, we can find his work in museums around the world. The problem of racism can be tackled in many ways which don’t involve the erasure of history, but it is wrong of white people, who are in no position to make these determinations, to shrug off the argument as a simple erasing of history (Patterson, 2021).

If history erasure is what we are to be wary of, let us look at the textbooks which teach the world’s children: in October 2015, McGraw Hill, an educational publisher, garnered controversy when a page from one of its geography textbooks was spread on social media (Wong, 2015). When addressing the trade of enslaved African people, a caption in the infographic said: “The Atlantic Slave Trade between the 1500s and 1800s brought millions of workers from Africa to the southern United States to work on agricultural plantations” (Wong, 2015). Not workers: slaves. The Trade forced millions of enslaved Africans from Africa to the United States and to the Americas. In fact, for 350 years, slavery was at the heart of the Brazilian economy, and 40% of the 10 million enslaved African people brought to the Americas ended up in the country alone (The Brazilian Report, 2020). Phrases like these work to dilute the significance of important historical events, and when published by international educational distributors, the connotations associated with this wording blankets the truth of these historical events, giving leeway to dominant—white—populations of the time.

Some critics of “cancel culture” also argue that Dr. Seuss was a “man of his time” when he created his work. Philip Nel, a children’s literature scholar and English professor at Kansas State University, says that the “man of his time” narrative does not hold up in an argument because to make that claim is “profoundly ahistorical” (Weik, 2021). Nel continues by saying, “All people in every moment don’t think the same. There were plenty of white Americans during that time who were not spreading the rhetoric that he was” (Weik, 2021). He says that people excusing Dr. Seuss’s racism is one of the reasons why his reckoning took so long (Weik, 2021).

At a time when diversity, equity, and inclusion (DEI) is a common topic of discussion, it is important to recognize when we become complacent ourselves in fighting for equality for all. After all, there is no point in having DEI conversation when we do not apply what we learn during those conversations to our every-day lives—that would render the conversation meaningless. This begs the question of whether institutions and organizations worldwide promote the importance of DEI simply to appease the people whom society has historically mistreated. In his 1963 letter from a Birmingham jail, Martin Luther King Jr. writes:

I have almost reached the regrettable conclusion that the Negro's great stumbling block in his stride toward freedom is not the White Citizen's Counciler or the Ku Klux Klanner, but the white moderate, who is more devoted to "order" than to justice. (King, M. L., Jr., 1963)

King points that shallow understanding from people who mean well is worse than the outright misunderstanding from people who mean harm: he says that passive acceptance is significantly more bewildering than complete rejection (King, M. L., Jr., 1963). In this statement, MLK Jr. highlights that performative anti-racism is more frustrating than a white supremacist because at least a white supremacist is willing to fight for what they believe in.

For those willing to fight for DEI within the literary world, especially in Latin America—being one of the most diverse places in the world—it is important to recognize that there are plenty of children’s authors from all backgrounds and identities who are just as talented and creative as Dr. Seuss was. We should acknowledge the fact that Dr. Seuss was a prolific writer and artist, and that he plays such a huge part in children’s literature, but we must also acknowledge that he has a racist past which can leave children with implicit biases. I have previously discussed the importance of picturebooks in children’s development and the importance of authenticity in multicultural literature. With Dr. Seuss Enterprises looking to expand their brand into the Latin American community, we must wonder whether these picturebooks, instead of those which celebrate diverse cultures by diverse authors, will leave consequential negative imprints on the minds of Latin America’s young.