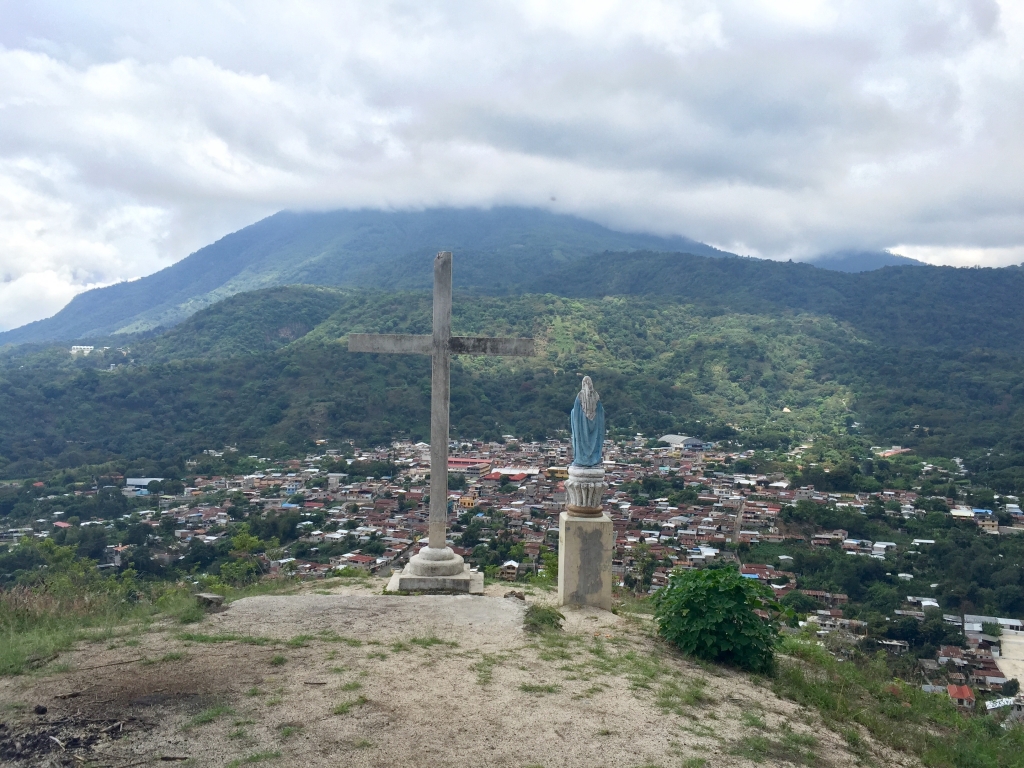 This past summer I had the incredible opportunity to spend half of my summer working in Sololá, Guatemala.  The municipality is located in the Western highlands of the country, and I was specifically staying around the beautiful Lake Atítlan in the town of San Juan La Laguna.  When my intern team’s boat landed in San Juan’s dock, I remember being a bit apprehensive – I had been forewarned that the town was more in tune to its Maya roots and that it would be a much more traditional experience than the other parts of Guatemala we had visited.  As I knew nothing of Maya culture, I had no idea what to expect.  The only thing I should have been worried about, though, was leaving a piece of my heart behind with the memories of the homey sound of tortillas being patted together, the picturesque sunrise peeking from behind the volcanos, and the sweet taste of cold rosa de Jamaica tea on a typical hot day.  More than anything, I find myself missing the amazing people there, especially my host brother, Carlos.

It was very easy to get along with Carlos; he and I bonded right away over Harry Potter and classic rock music, and I was even more elated when he wore a t-shirt of my favorite baseball team, the Pittsburgh Pirates.  In addition, he took me around town and taught me about the local art and music and their indigenous traditions, which included some lessons over dinner in Tz’utujil, the indigenous language they still commonly use in favor of Spanish.  I had help dressing in the traditional Maya huipil when I went to the crowning of their town’s new queen, who had to be an exemplary Maya citizen who worked to uphold their traditional values, which are predominantly based upon loving and respecting the earth.

When it was time for me to leave I remember thinking how strange it was that although Carlos and his friends already knew so much of my culture, I would be one of the few in the United States that was even aware of their vibrant existence.

In September, though, Carlos and some other community members made the journey north, and I jumped at the chance to write about their opinions of being abroad.  When I initially started this piece, I had plans to ask some feel-good touristy questions: “what was your favorite food?” “what was your favorite thing that you saw?” “how was the plane?,” etc.  Although I could answer those (“Thai food”, “New York City”, and “good,” respectively), after speaking with Carlos I felt that I would be incredibly remiss if I failed to help share what was the paramount goal of his trip: to tell his people’s story.

Carlos is currently working as the Guatemala Program Manager for a group called Unlocking Silent Histories.  Their goal is highlighted on their website:

“At Unlocking Silent Histories, we aim to support indigenous youth learning opportunities that lead to critical and creative media expression, amplifying their voices and identities, and honoring their cultural and linguistic heritages...”

In cooperation with the National Smithsonian Museum, a small group from Unlocking Silent Histories traveled to New York, Washington D.C. and North Carolina to share some of the documentaries the team has made (you can visit their site to see some examples here: http://unlockingsilenthistories.org/Our-Productions/2015) and spread awareness of their beautiful culture.

Through personal correspondence, Carlos expressed the importance of this, saying “The purpose is to carry my culture to other countries so that other people realize that as indigenous towns we still exist, and we also have abilities, and we can have a space in the world!”  He continued to say that he feels, “People who visit my country or community sincerely feel that there is a big difference because technology has not yet fully advanced.  Our culture and traditions are still conserved, as well as natural art and the language.”

It is therefore just as important to talk about the strain that has been, and is currently being placed on indigenous populations throughout Latin America.  Amazingly, roughly 60 percent of Guatemala's population is made up of indigenous peoples, which is more than six million inhabitants (IWGIA).  In fact, the Mayans of Guatemala are the only indigenous culture that wields a majority of the population in a Central American republic (Minority Rights Group International). However, a report from 2008 indicated that 73 percent of this indigenous population are poor - 26 percent are extremely poor (IWGIA).

These numbers are the result of years of discrimination and corrupt government actions that have left indigenous peoples with small plots of unyielding land.  In the past century, countless efforts have been made to fight for the rights of these people; notably, in 1992 the Nobel Peace Prize was awarded to Mayan exile Rigoberta Menchú.  Her work helped to give the Maya people in Guatemala an international platform and the ability to share their story with decreased military repression (Minority Rights Group International).  Opposite to the increased discrimination and negative results from the 1985-95 internal armed conflict, the year 2003 also saw an increase in an indigenous presence.  Many organizations grew, including locally based development groups, and the people drew attention to issues including land, civil and cultural rights, bilingual education and the recognition of Mayan local authorities.  Today out of Guatemala’s 331 municipalities, 105 have indigenous mayors.  However, this is sharply contrasted in the National Assembly where only 15 of 158 deputies are indigenous (Minority Rights Group International 2008).

This is largely due to intentional roadblocks on indigenous voting rights; although suffrage is constitutionally granted exclusionary social practices like tedious voter registration, transportation limitations, and elections scheduled for harvest season act to limit the population’s ability to vote (Minority Rights Group International 2008).

It is clear that there is still a lot of progress to be made for Maya rights, but in the meantime Carlos agrees that the first step towards this goal is a simple awareness: The Maya are still very much alive, and they are a force to be reckoned with.

Sources for this article: