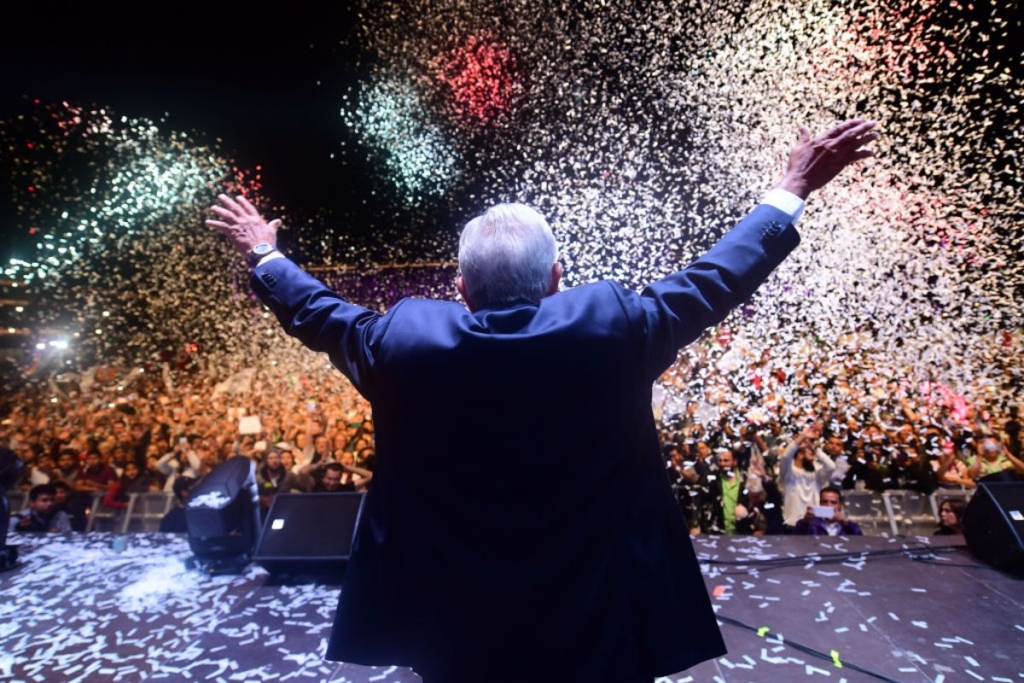 Just last week, Mexico entered a new chapter in history as Andrés Manuel López Obrador, better known as AMLO, secured his position as future president of Mexico in this year’s highly anticipated elections. López Obrador, who founded his own leftist party MORENA (Movimiento Regeneración Nacional) in 2012, led a highly controversial campaign in the past year which led him to decisive victory. As election day came to a close, millions took to the streets of Mexico’s major cities to show their support for their future president with a near-revolutionary fervor.

Shortly after the polls closed last Monday, the former mayor of Mexico City claimed victory with at least 53% of the vote—an extraordinarily high number for a candidate in Mexico’s multi-party system. His two main opponents, Ricardo Anaya of the PAN (Partido Accion Nacional) party and Jose Antonio Meade of PRI (Partido Revolucionario Institucional), trailed rather far behind, earning around 22% and 16% of the vote, respectively (El Pais). As it became clear on election night that they had lost, both Anaya and Meade promptly conceded the election and even wished the new president-elect luck in his new position (El Comercio). Such a quick concession and public regard of the winner by both major opponents surprised many, as this is not standard practice in Mexican elections.

Last week’s elections were a momentous occasion in Mexico, not only determining the country’s next president but also over 3,400 political positions at the local, state, and national level. The election saw dramatic shifts in power at all levels, most notably from the traditional, conservative parties—PRI and PAN—to MORENA, a symbol of a new left-wing upsurge among the country’s voters. In fact, this is the first time that a candidate from a leftist party has won the seat of president in Mexico (El Comercio). López Obrador’s party will now have a significant hold in both houses of Mexico’s congress, and candidates from the movement will now govern many of the country’s key cities and states, including Mexico City, Chiapas, Tabasco, and Veracruz.

This election marks a remarkable shift in Mexican politics, which have largely been dominated by the conservative PRI party for nearly a century. PRI’s rule was briefly interrupted in 2000 when PAN rose to presidential power under Vicente Fox. However, after only two presidential terms under PAN, PRI quickly returned to power with sitting President Enrique Peña Nieto only twelve years later.

The shift away from PRI in 2000 was hugely symbolic of a chance for legitimate change in Mexico’s political system, which up until that point had been characterized by seemingly insurmountable levels of corruption and fraudulent politicians. However, it soon became apparent that PAN only brought more of the same to Mexican politics, leaving many supporters cynical of the possibility that a shift of administration would be enough to enact the change that they sought. With this, PRI returned to power in 2012 with grand promises by Peña Nieto of new strategies to combat endemic problems of corruption, violence, and poverty. However, in the six years since Peña Nieto’s election to office, the reality has been much bleaker, with soaring rates of violent crime, gang activity, and frequent corruption scandals within his own administration.

Discontent with the lack of change in the past two decades, voters apparently turned away from Mexico’s traditional political parties, and to López Obrador’s party, MORENA, and the cross-party movement that it inspired, named Juntos Haremos Historia (Together We Will Make History). Although this is actually AMLO’s third time running for the presidency, this is the first time that he has garnered the support sufficient to secure him the seat. The previous two times that he ran, in 2012 and 2006, he was the runner-up.

In the past year, AMLO has led a populist campaign based in promises of radical change to those who have been ‘forgotten’ by existing political parties and initiatives. In this campaign, he appealed to poor and indigenous communities throughout Mexico, who largely view that they have been systemically disregarded or excluded by politicians in the past. One of the president-elect’s largest campaign promises has been economic growth for poor and indigenous communities, making him largely popular with these groups, and even in many ways designating MORENA as a movement for indigenous people in Mexico. This is especially true for the party at a local level, at which candidates have made an effort to promise economic growth and the development of necessary infrastructure in local indigenous communities.

Other promises made by AMLO during his campaign were to combat corruption, which is arguably the biggest problem within the PRI party, widely known for scandals involving corruption and fraud, and for its relationship with (and infiltration by) criminal and narcotrafficking organizations. Although most other presidential candidates also made anti-corruption a major part of their platform, this was perhaps more legitimate coming from an anti-establishment candidate without major affiliation with any existing political party.

Another part of López Obrador’s platform is his commitment to be a leader who defends Mexico and its interests on the global stage—most notably by defending Mexico in the face of its main aggressor, U.S. President Donald Trump. Many of AMLO’s supporters view that current president Peña Nieto has failed to protect his country’s interests as Donald Trump becomes increasingly antagonistic with regard to issues such as immigration and trade. AMLO has led a campaign with the idea of putting Mexico’s interests first and asserting itself as a country of equal capacity and dignity, with a relationship of ‘friendship and respect’ with the United States (CBS News).

Ironically, this ‘Mexico First’ approach and AMLO’s populist campaign has sparked comparison between the leftist leader and his main international opponent, Donald Trump himself, who used similar tactics to secure his own presidential election in 2016. Yet the platforms of the two leaders are strikingly different, coming from opposite ends of the political spectrum.

However, the relationship between the two leaders has already taken a step in a positive direction, with President Donald Trump congratulating López Obrador on his victory via Twitter, and later speaking on the phone to discuss alternative strategies to the immigration problem.

The final issue that played a major role in this year’s presidential elections was that of violent crime in Mexico, most of which is connected to gang activity and narcotrafficking. Violence in the region has soared in recent years, with 2017 being the most violent year in Mexico’s recent history (Al Jazeera). In fact, due to close ties between criminal groups and certain political parties, hundreds of politicians and political candidates have been targeted, or even killed, for their determination to run for office against major parties. At least 130 political candidates were assassinated since last fall, making this year the most violent electoral season in Mexico’s modern history (New York Times). Many politicians even abandoned campaigns after being attacked or threatened by members of criminal groups.

In the past two decades, these levels of violence have largely been written off as a symptom of the drug trade, leading presidents to resort to military intervention in the name of the War on Drugs to counter the issue. However, López Obrador has been very critical of this strategy, pointing to statistics suggesting that military intervention has actually been linked to an increase in violent crime. He has proposed new approaches to countering this violence without the use of military force and has suggested granting amnesty to violent criminals, which has sparked sharp criticism from members of opposition parties who prefer a more aggressive approach.

Naturally, AMLO’s promises of radical change have ruffled some feathers with politicians of the country’s conservative and traditional parties, to whom he refers ‘the mafia of power’. Perhaps the largest criticism of López Obrador’s campaign is that many poor and uneducated voters have become swept up in the grandeur of his charisma and his promises of dramatic change, while it is impossible to enact such systemic transformation within just a short six-year term. Additionally, opponents pose the argument that he has failed to propose many detailed policy plans, leading many to believe that he has little plan with which he is to enact such changes. Others are wary of his populist approach and his massive following among the country’s lower classes, viewing that he is dictatorial by nature and could lead Mexico in an undemocratic direction.

In light of these criticisms, it is important to recognize not only AMLO’s campaign promises, but what he symbolizes for his supporters: hope and possible revolution. Though it is necessary to address the legitimacy of the opposition’s concerns, it is also crucial to recognize the element of hope and optimism that López Obrador has brought to many Mexicans who have otherwise lost faith in their political establishment. At this pivotal time in Mexico’s history, one should view AMLO and the MORENA movement as a symbol of hope for future generations that change in a country with such a tricky history is possible; the campaign slogan for MORENA was even ‘La Esperanza de Mexico’ (The Hope of Mexico).

Given the results of this election and the landslide victory by López Obrador, it is undeniable that the Mexican people are extremely dissatisfied with establishment politics and with their traditional political parties. These parties have failed to bring the change that the Mexican people view as necessary, and to a great extent have even perpetuated the problems that they claim to be attempting to overcome.

With these factors in mind, it is important to remain critically hopeful as we await López Obrador’s ascent to the presidency on December 1 of this year. We must recognize the validity of the criticisms from opposition parties, yet also stay optimistic that the future president truly is the key to the change that his constituents want. And, if anything comes out of this election, it is that it is clear that the Mexican people desire change—and that they view AMLO, and MORENA, as the solution.