What the FARC left behind 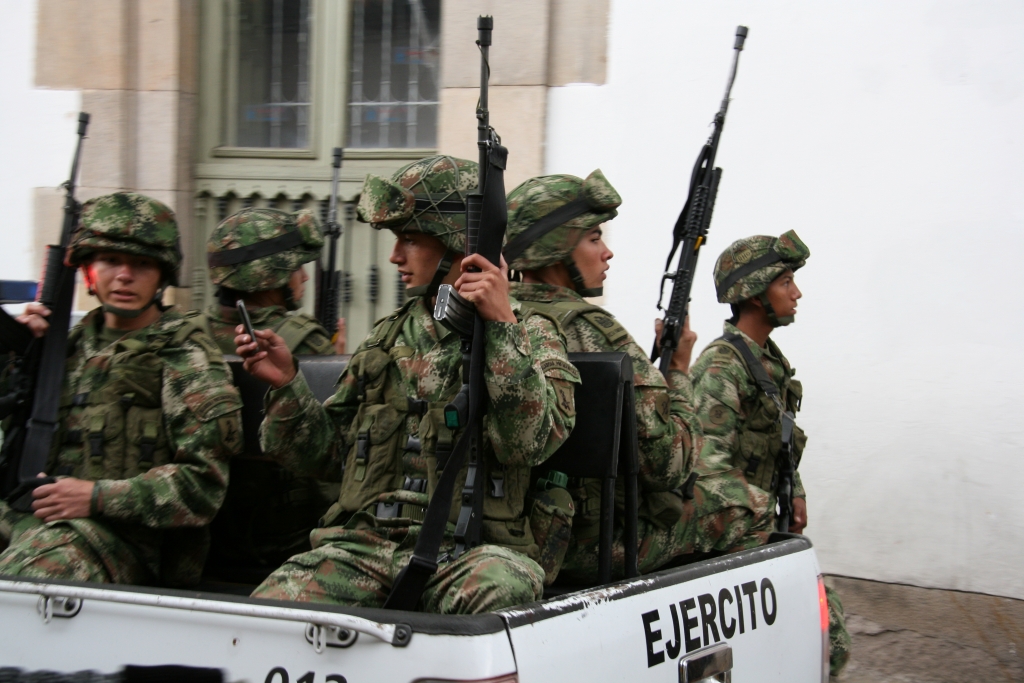 The Colombia-FARC Peace Deal’s implementation of a peaceful, though slow transition for the FARC from a militarized regime to a Political Party has been making great strides to end the violence that plagued Colombia for over half a century. However, it would be unwise to assume that the demilitarization of a single armed group is enough to extinguish the brutality that has become such a hardship for the people of Colombia. As addressed in my previous article, “Updates in the Colombia-FARC Peace Deal”, the transition of the FARC into demilitarized Colombian citizens has had its challenges. Among these challenges are FARC rebels diverging from their party to continue using drug-trafficking and extortion for personal gain, and a fluctuating Congress that has prolonged the Peace Deal’s implementation (Bierly, 2017). Not only is the delayed execution of the deal stalling any major strides towards peace, but the power and land vacuum left behind by the FARC has allowed other groups to replace FARC soldiers in terrorizing the Colombian countryside.

In order to understand the conflict succeeding the FARC, it is necessary to consider Colombia’s history with armed, militant groups. The FARC, or Revolutionary Armed Forces of Colombia, though the richest and perhaps one of the best known of Colombia’s paramilitary organizations, is not the only group to take up arms against the government of Colombia. The National Liberation Army (ELN) was formed about the same time as the FARC, and was based on similar left-wing policies, however, unlike the FARC, ELN was focused mainly on politics, and refrained from drug-trafficking in its early years as a paramilitary organization, however in more recent years, the ELN has become associated with the illegal drug trade and criminal gangs. Following the FARC peace talks, ELN has expressed interest in negotiations with the Colombian government, though the government is not yet willing to meet with ELN leaders on the matter (BBC Latin America & Caribbean). The United-Self Defense Forces of Colombia (AUC) are a right-wing group of paramilitaries created by drug-traffickers and business and landowners in order to combat the FARC and ELN, murdering activists that oppose them (United Nations Regional Information Centre). Although the AUC officially disbanded ten years from last year’s FARC peace deals, members have formed gangs known as Bacrim which have continued to terrorize Colombian villages following the peace deals (Felter, 2017).

The Bacrim now pose the largest security threat to the country, following the FARC transition and ELN’s supposed hope to follow in the FARC’s footsteps. These gangs have taken up the drug-trafficking and extortion that the FARC left behind, and according to Colombian think-tank Indepaz, are “responsible for more violence than left-wing rebels” (BBC Latin America & Caribbean). Without the many paramilitary guerilla groups that once kept the Bacrim at bay, the Bacrim may be able to terrorize the country in a way the FARC and ELN never could, and perhaps what makes the Bacrim even more dangerous, is that unlike the FARC and ELN, their main priority is personal wealth, rather than political reform.

The increased threat the Bacrim pose in light of the FARC peace deal is no longer speculative. Countless villages throughout the Colombian countryside have been ravaged by these criminal gangs. Al Jazeera reports on the devastation these paramilitary groups have caused one of several peace communities formed in San Jose de Apartado.  Although these communities were created to resist the oppression caused to them by guerilla and state forces, members could not escape violence, and believe that it has increased following the peace deals. In the report, a member of a San Jose Peace Community explains that since the FARC moved out, new paramilitary groups have moved in. Father Leonidas Moreno, a priest involved with the creation of the peaceful communities blames the government for labeling these violent groups as just gangs, saying that he believes that they are paramilitary organizations taking over the territory (Rampietti, 2017). The Bacrim have been terrorizing villages across the entirety of Colombia. One of the most powerful of these organizations, the “Usuga Clan” has reportedly tripled the murder rate in the community of Barbacoas, Nariño following the FARC abandonment of this territory in Southwest Colombia (El Tiempo, 2016).

Although the Bacrim dampens Colombian hope that the success that the FARC peace deals might bring an end to decades of violence in the country, unity between ex-FARC and the Colombian government could provide Colombia the resources necessary to lessen or expel the Bacrim violence in the Colombian countryside. By pulling FARC and government forces together, the Bacrim may not be more than a group of glorified small-scale drug dealers scrambling for power they cannot maintain. Regardless of the Bacrim’s stability, thousands of Colombian citizens are suffering and will continue to suffer at the hands of these paramilitary organizations if the Colombian government continues to dismiss them. The FARC may be transitioning into a peaceful political party, but the new threat lies in what they left behind.