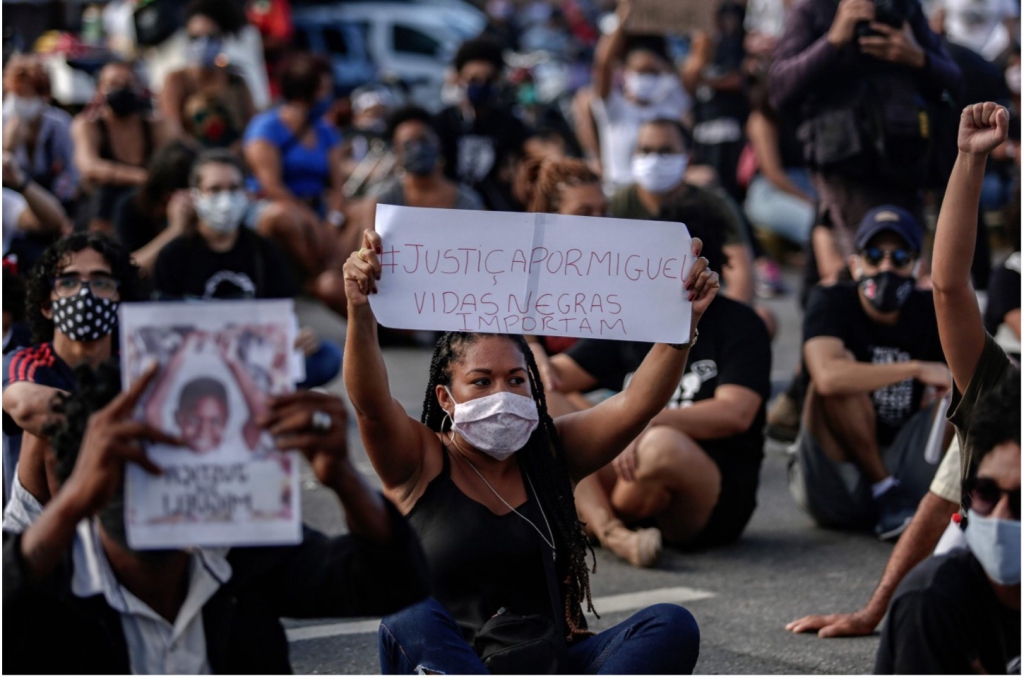 Two Black children, Miguel Otávio Santana da Silva, aged five, and João Pedro, aged fourteen, both passed away tragically during the month of June, 2020 in Brazil at the hands of white individuals in power. The civil protests taking place have not only been catalyzed by these two deaths, but also fueled by the history of civil unrest due to police brutality, racism, and discrimination.

The unjust deaths of George Floyd, Breonna Taylor, Tony McDade, Ahmaud Arbery, and numerous other Black Americans at the hands of police brutality have incited many Americans to take to the streets to protest. Over the past few months, the Black Lives Matter Movement has not only gained momentum in America, but Brazil as well. The deaths of  Miguel Otávio Santana da Silva, a Black five-year-old child, and João Pedro, a Black fourteen year old child, have prompted many to peacefully demonstrate in the streets of cities all over the country. The closeness of the two tragic events is representative of the violence that is enacted against the Afro-Brazilian community daily.

Miguel Otávio Santana da Silva was a five-year-old child who fell from the ninth story of a building after being left unattended. The white woman who was entrusted with watching him was the boss of the child’s mother. The mother was asked to walk the family dog as the woman watched Miguel. The footage from the scene that day show the employer leaving the child on the elevator, after pressing buttons, leading him to the upper levels of the building. He ventured through the building and made his way over a balcony railing, meeting his demise. João Pedro was a fourteen-year-old teen who was shot in the back by police, after seventy shots were fired, during a police force raid. The killers of both children have yet to face any serious repercussions for their transgressions. Miguel’s killer was charged with manslaughter but has been released on bail. The officer that took Pedro’s life is currently “under investigation” for his actions.

Miguel da Silva and João Pedro’s horrendous deaths are representative of the reality of the many Black children who live with this fear each day. Racial segregation is readily observed in the Black-dominated favelas and barriadas of Latin America, while Euro-Americans exclusively dominate luxury and middle-class housing (Jones, 2018). The death of Black adolescents and adults is not an uncommon occurrence. In 2019 alone, Rio de Janeiro had more than 1,800 victims of state violence. In the first half of that year alone, 80 percent of the victims were Black and in economically marginalized circumstances (Freelon, 2020). Though Afro-Brazilians make up a fair amount of Brazil’s population, 56 percent, they have a lower life expectancy and according to activists face deeply ingrained discrimination (Malafaia, 2020). By this token, some of the factors that contribute to this include inadequate access to healthcare, low income, and police brutality, which is seen primarily in urban areas of Brazil. Stories, like João’s, have been told before, as thousands have lost their lives due to systematic mistreatment of marginalized people.

There is a long history of civil unrest in Brazil, especially pertaining to mistreatment of Black and Brown individuals. These demonstrations are a call to action because, all too often, people in higher positions are committing crimes without being held accountable. Activism is not a newfound concept in Brazil, as Afro-Brazilians have been protesting from as early as 1920. By means of newsletter, messages of social justice were spread. For example, here is an except from one of the early newsletters named “O Clarim da Alvorada”:

“… through history, the sublime courage of a race which, though enslaved, did not let itself be dominated in the struggle for its rights . . . The good name of our people depends on our actions. It is our responsibility to introduce the value of our race into the development of society ...”(Butler, 1992).

The messages conveyed in the given newsletter are still relevant to today’s conversation. Modern day advocacy is now expressed by means of Instagram stories, Tweets, or Facebook posts. Many social media influencers have used their platforms for the sake of spreading awareness. Slowly the world is beginning to open its eyes to the injustices that go unseen around the world because the knowledge is at the touch of a button.

Over policing and underfunding Brazilian communities continue to widen the divide socially, politically, and economically. With Afro-Brazilians at the forefront, the movement for social justice and the dismantlement of systematic racism has been taking place for years. The ongoing protests in Rio de Janeiro began taking place in June of this year after the tragic incident and have been going strong since. Amidst a global pandemic and a violent brutalizing group that is the police force, those who bear dark skin continue to fight for their civil rights. Miguel da Silva and João Pedro were just two of the many children who have lost their lives at the hands of white ignorance and violence. The Black Lives Matter protests continue in honor of these precious lives, as does the fight for Black liberation and justice.

Ashley Brown is a junior at the University of Pittsburgh majoring in Nonfiction English Writing and Spanish with a minor in Africana Studies and certificates in Latin American Studies and Sustainability. She is also the President of the Latinx Student Association at Pitt. Ashley is primarily interested in racial and environmental justice, liberation movements for BIPOC, and raising awareness about Afro-Latindad. Upon graduating, she plans to pursue a career revolving around environmental sustainability and anti-racism.