The Venezuelan Migrant and Refugee Crisis: Bringing Attention to the Displaced 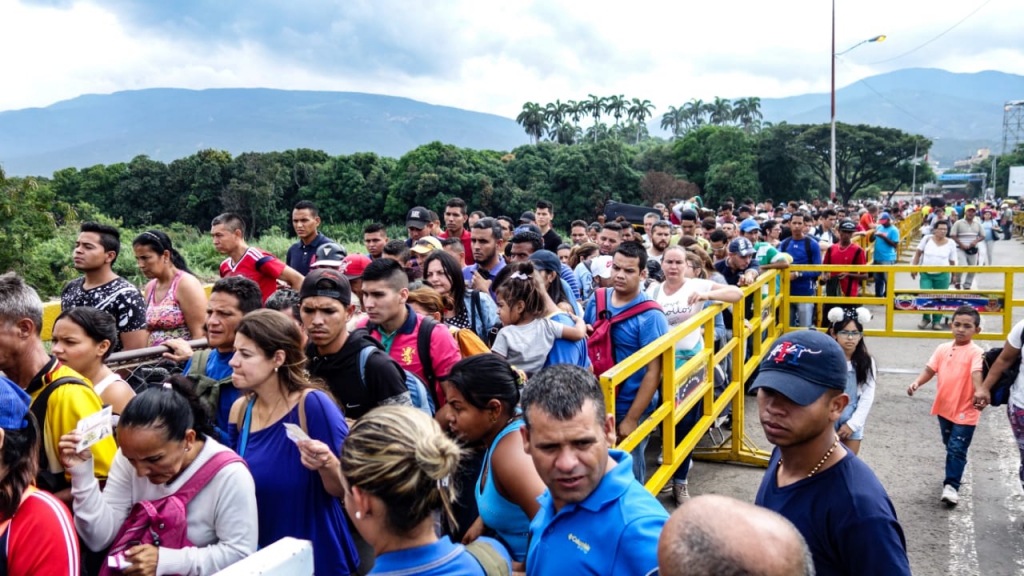 Driving through the mountainous roads of Colombia, I gazed out the window and saw a Venezuelan family walking aimlessly, carrying bags upon their shoulders. The Venezuelan-Colombian border was hundreds of miles away, so they were likely walking for weeks. It was shattering to see these people on foot, tired, and starving, not knowing what their destination would be, but it is more shocking knowing that this family is just one of the hundred thousand families fleeing under these conditions. Around 4.2 million refugees and migrants from Venezuela have left the country seeking asylum, mainly in Latin America and the Caribbean. Colombia, with a population of 50 million people, received 1.8 million Venezuelan migrants that now comprise around 3% of its population (Brookings Institution et al., 2019). Other nations hosting plenty of migrants include Peru (861,000), Chile (455,500), Ecuador (366,000), and Brazil (253,500) (IOM, 2020).

Violence, corruption, hyperinflation, poverty, and an almost non-existent health-care system, are all factors that are forcefully driving Venezuelan citizens out of their country. From President Maduro denying that a humanitarian emergency exists to the international community giving it less attention than it needs, the Venezuelan migrant and refugee crisis is resulting in one of the worst humanitarian crises the hemisphere has ever seen (Bahar, 2019).

Unlike other refugee crises, the one in Venezuela is not due to conventional war or conflict. Yet, the conditions that people face are not too different from those in an active war zone (Bahar, 2019). They are running away from a crisis that has dragged on for years, during which human rights violations are carried out daily by President Nicolás Maduro. His government and security forces engage in a variety of brutal torture tactics to silence dissidents (McKay, 2020). This year, investigators from the United Nations implicated President Maduro and other high-ranking officials in systematic human rights abuses—including killings, torture, and sexual violence (Cumming-Bruce, 2020). The Venezuelan economy continues to weaken, having contracted by 65%—the largest contraction in the world outside of war in 45 years. This economic collapse was not caused by external forces or internal unrest typically linked to war, but it was created by those in power (Bahar, 2019).

President Maduro is still moving decisively to consolidate his power. Although his term ended in 2019, he claimed his victory in the 2018 presidential election. The election itself became a global news story as the election had varying degrees of corruption and was widely condemned as neither free nor fair. His controversial victory authorized another six-year extension of his term (VOA, 2020). Venezuela’s panorama today is violence caused by a power struggle between the Venezuelan opposition and Maduro’s military, food shortages, hunger, and a collapsing public health system—leaving many without access to lifesaving medicine during a pandemic (Specia, 2019). Also, with rampant inflation leaving the local bolivar currency nearly worthless, Venezuelans’ average income is about 72 U.S. cents per day, resulting in more than 64.8% of households experiencing multidimensional poverty (Reuters, 2020).

Most displaced Venezuelans meet the refugee definition from the 1984 Cartagena Declaration on Refugees, defining refugees as “persons who have fled their country because their lives, safety or freedom have been threatened by generalized violence, foreign aggression, internal conflicts, massive violation of human rights or other circumstances which have seriously disturbed public order” (Feierstein & Winfield, 2019). Thus, those fleeing Venezuela are refugees and should be entitled to the protections that come with that status in any country (Bahar, 2019).

Despite the massive scale of displacement and humanitarian need, the crisis is becoming the most underfunded in modern history (Bahar, 2019). Host nations receive very little support from the international community compared to other historical displacements. The number of Venezuelan refugees is on pace to surpass the number in Syria. In response to the Syrian crisis, the international community spent a cumulative $7.4 billion on refugee response efforts in the first four years, while funding for the Venezuelan crisis only reached $580 million in the first four years of conflict. Strikingly, this difference in funding happened despite both countries having around 4 million refugees (Bahar, 2019). In addition, a recent report declared that the UN’s 2020 Venezuelan Humanitarian Need Overview and Humanitarian Response Plan required $762.5 million to reach 4.5 million people in need of humanitarian assistance, but only received 8% ($61.9 million) as of September 4, 2020 (CDP, 2020). Nine in ten migrants in Colombia and Peru report their food and water needs are only at least partially satisfied, and 63% say the same in terms of access to health services (Feierstein & Winfield, 2019).

In the attempt to regulate the massive flow of migrants, countries in the region receiving migrants are now demanding passports and visas. For example, Chile and Ecuador demand migrants to enter having a valid visa or passport, and Peru—with 860,000 Venezuelan migrants—is also starting to establish restrictions (Castañeda, 2020). This sets off a serious problem for refugees because the process of obtaining or renewing a passport in Venezuela is expensive and can take months due to a lack of materials (Brookings Institution et al., 2019).

Although restrictions exist, the Colombian government continues to be more flexible by not demanding valid documentation to enter the country. Thus, besides proximity and cultural ties, this makes Colombia a more ideal destination for migrants. Colombia started giving protection to refugees under its previous government led by Juan Manuel Santos. His policies of open borders and extending health care and protection to Venezuelans continue under the current President, Iván Duque (Castañeda, 2020). However, even when migrants manage to enter Colombia with an irregular status, documentation becomes a huge barrier inside the country.

Without the required documents, it is almost impossible to work on a registered basis, rent a house or business, and access social security, health systems, and education (CELS & CAREF, 2020). An example is the implementation of the Special Stay Permit (PEP), aiming to integrate Venezuelans by allowing them to stay and work in the country. These permits certainly allow migrants to integrate and contribute to the economy, but the downside is that they mostly benefit those who entered Colombia before November 29, 2019, with stamped passports and those with an irregular status having proof of regular income (UNHCR, 2020). So, many migrants are excluded from these benefits. According to the Colombian Migration Authority, only 14% of the almost 600,000 Venezuelans in Colombia that currently hold a PEP, are engaged in formal employment (UNHCR, 2020). Venezuelan migrants working in the informal sector are seen on the streets of Bogotá selling eucalyptus, candy, and other goods, whilst others stand near stoplights begging for money and food for their children.

Maduro denies that there is a humanitarian crisis and blames sanctions from other countries like the U.S. for the existing problems. However, the crisis was a result of his own economic mismanagement, corruption, and dictatorship that weakened democratic institutions. The U.S. and more than 50 other nations recognize opposition leader Juan Guaidó, who declared himself interim president in 2019, as the rightful head of state (Specia, 2019). Guaidó and other opposition leaders attempted to unseat Maduro several times and failed as a result of Maduro’s strong and loyal military. A reason for Maduro’s strength is the economic, political, and military support offered by powerful allies such as Russia, China, Cuba, Iran, and Turkey (Rendon & Fernandez, 2020). For example, a militant strategy backfired in May when a small invasion force of about 60 exiled Venezuelan soldiers and two American mercenaries arrived at Venezuela’s coast near Caracas, but they were quickly captured by Venezuelan troops loyal to Maduro (Otis, 2020). The global support that Maduro receives is impeding efforts to mitigate the crisis, and the number of refugees will continue to increase if he is in power.

So, when will this end? Unfortunately, the crisis shows no signs of slowing soon. Unless there is an economic recovery and both Maduro and the Socialist Party fall, more and more Venezuelans will make the difficult decision to leave their country as it continues to crumble in the hands of Maduro (Feierstein & Winfield, 2019). The crisis is no longer just a national or regional problem. It already reached a global scale, and it requires a global response. Global political clashing reflects that it is not certain when Maduro will be removed from power. Therefore, necessary funding and increasing awareness about the magnitude of the humanitarian emergency in Venezuela, are crucial to ensure the protection and security that these refugees deserve.