From Trauma to Triumph: Black Motherhood in the Americas 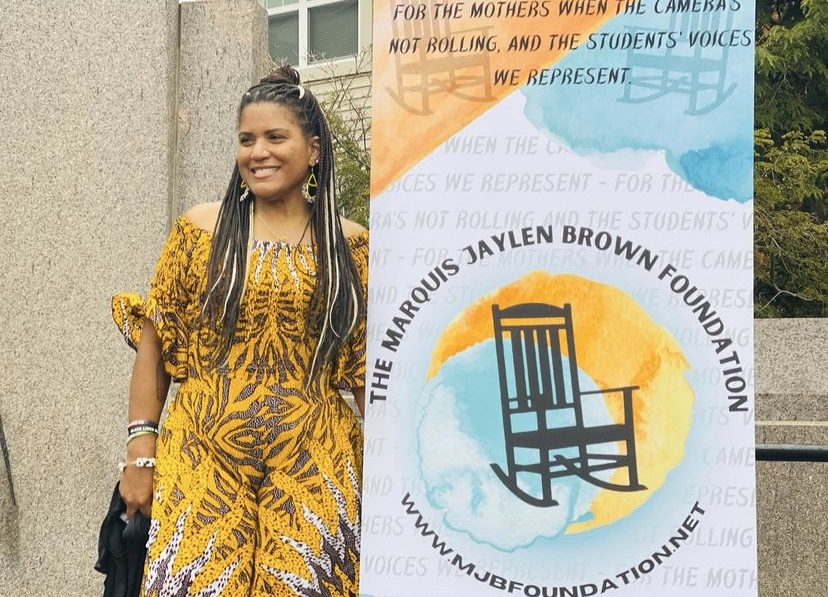 “I am social justice knocking at the door.” – Danielle “Mama” Brown

Dannielle Brown has finally ended her hunger strike after 237 days. In an effort to seek justice for her son, Marquis Jaylen Brown, she willingly deprived herself of the nutrients and protein necessary to keep her alive. This slow and painful protest began because of the racism and discrimination that is fundamentally embedded into our society. Anti-Blackness is an atrocity that exist freely at the expense Black suffering. The conception of the United States was entirely dependent upon the dehumanization of Black people as they continue to be treated as property, violated and beaten. As white supremacists take on modern-day disguises as law enforcement and members of the government, we continue to witness this cycle of violence enacted against the Black community. Day after day Black mothers, specifically, face pain due to discrimination and violence enacted both them and their children. This does not go unseen in other places harmed by white supremacy. Black Motherhood, especially in the Americas, is a thankless act of perseverance. So often, women that face this trauma must take matters into their own hands to demand justice for the precious lives that have been stolen from them. It is essential that we shift the language regarding marginalized young mothers as ‘victims’, to women with an ‘active voice’ (Mantovani, N., & Thomas, H., 2015) as they sit at the forefront of advocating for justice. Danielle Brown and Mirtes Santana are two exceptional mothers who are using their voices to speak for their sons.

“Society imagines parenthood and the child to be "sacred," "innocent," and "worth protecting" seemingly until it considers parents and children of color, in which case these bodies—and the bodies of children of color—are always already criminalized” (Morgan, 2018).

Many African American mothers are emotionally fatigued and in a constant state of hypervigilance. They worry about a variety of factors that affect their sons’ well-being (Brown-Manning, Robyn, 2013). Even when not the direct victims or targets, Black mothers and children are in an incessant state of trauma and near-trauma as the anti-Blackness of the nation criminalizes their bodies and disallows either innocence or reprieve (Morgan, 2018).  The treatment of Trayvon Martin’s mother offered a horrifying example of the contempt with which the Black woman is viewed in the mainstream white American culture (Rousseau, 2013). Martin’s mother, Sybrina Fulton, and Lezley McSpadden, the mother of Michael Brown—an eighteen-year-old murdered by police in Ferguson, Missouri, on August 9, 2014—were both plagued by accusations of poor parenting and questions about their connectedness to their children (Morgan, 2018). Not only were their sons killed and subjected to postmortem criminalization, but they themselves were found blameworthy. This is just one of the many horrify aspects of how Black mothers are treated, especially when experiencing the loss of a child.

“Duquesne University and the Nation... I want you to hear me…I sent my son to get an education, you sent my son back to me in a casket.”
– Dannielle Brown (Gromley, 2020)

Duquesne University has perpetrated a serious injustice in the case of 21-year-old Marquis “Jaylen” Brown, an African American student-athlete who died tragically in 2018 under dubious circumstances following an interaction with campus police (Gromley, 2020). To this day, Jaylen’s mother and family have yet to receive a reasonable explanation or complete report surrounding the events that led to his death. In addition, they question the legitimacy and comprehensiveness of the so-called investigation conducted by campus and local authorities, which quickly ruled his death a suicide (Gromley, 2020). Jaylen’s has taken on the role of independent investigator into her son’s his death and is demanding the opening of a transparent examination.

Mirtes Santana weeps when she remembers finding her son dying on the pavement outside the luxury seaside apartment block where she worked in north-eastern Brazil (Prange, 2021). On Tuesday, June 2nd, Mirtes had just returned from taking her wealthy white employer’s dog out for a walk when witnessed she saw her five-year-old lying on the ground. Her son, Miguel Otávio Santana da Silva had plunged nine stories after being left alone in an elevator by his mother’s boss. His fall was fatal as he died soon after in hospital.  The charge they wish for the negligent boss to be given is "abandonment of the incapacitated resulting in death". However, there is a long road ahead for obtaining this. For Mirtes' lawyer, this freedom is a privilege that highlights the unequal treatment of rich and poor Brazilians. "If every Brazilian who does not represent a public threat could pay bail to answer a lawsuit in freedom, I would understand, but that is not the case (Phillips, 2020). As the defendant is a woman with economic power, she had this request forwarded and was not arrested," says Eliel Silva (Prange, 2021). In an effort to prevent her son’s trial from falling to the wayside, she has taken the steps necessary to educate others and apply pressure to ensure that a rightful conviction is made.  She now works for the non-governmental organization Curumim in Recife, which campaigns for women's rights and combats racism (Prange, 2021). Additionally, she is studying law and has made it her mission to prevent victims of injustice.

“Dannielle Brown has been on Hunger Strike since July 4th, 2020, demanding change to campus policing in honor of her son, Marquis Jaylen Brown” (Marquis Jaylen Foundation).

Dannielle is the mother of Marquis Jaylen Brown, a Duquesne University student and football player who passed in the on October 4, 2018. After 237 days, Mama Brown has ceased her nearly year-long hunger strike. I had the honor of speaking with Ms. Brown regarding her commitment to seeking the rightful justice Marquis deserves. Her journey to make meaningful change to honor her son and to prevent future mothers from having to bear this trauma. She said to me that she had goals and dreams for herself, her children, and her children’s children got deterred, though she may or may not return to her dreams but currently, she is focused on seeking justice. “The odds are against me because I’m missing one” Danielle stated over the phone, “when a mother loses a child, they [the public] do not understand the loss of innocence; you keep a tighter fist around the children you have left. You carry it everywhere”. A significant part of her protest took the form of a hunger strike, which lasted 237 days. When asked about this, she said her diet consisted of “no protein, no nutrients, no meal replacements, no vegetables and no smoothies” as she relied solely on sugary juices, Gatorade and liquid vitamin B. What made her situation all the more real to me is that a switch to drinking solely water would result in her almost immediate death. In the face of opposition, however, Mama Brown has used her voice to uplift and educate other families for the sake of their children. During our call, she told me that she wishes to impact and touch multiple families nationwide. Her desire to do so is evident as Dannielle stated on one of her Instagram post:

“I will be conducting zoom calls, organizational call to action meetings, visiting with various “Mother” led action groups (to include women, men, families organization groups), mental health forums, law enforcement forums, and partnering with other key stakeholders to strengthen our relationships as a third party observer and layer of resources/social justice accountability!”

Her perseverance has inspired many as students and community members to protest alongside her, whether it be monetary, physically or spiritually. Her efforts have invited conversation amongst students at Duquesne and other neighboring universities. A student from Duquesne’s newspaper, Duke Press, stated, “I say this, because as Black people, we have earned the right to articulate how we feel. We know what anti-Black racism feels like, what it looks like, and what it sounds like”. They tell their experience “It is not our fault that many white people do not understand the magnitude of our plight, that they do not know what it means to be Black in a country that has systemically failed to address, let alone fully acknowledge, our pain and our suffering under white supremacy” (Duke Press, 2018). Her actions have, and will continue to impact neighboring universities, such as the University of Pittsburgh.

Black mothers, such as Dannielle Brown and Mirtes Santana, deserve recognition for their resistance in a system that actively works against them. The sacrifices made to provide for their children in a world of discrimination are deep and selfless. The toll it takes to be stripped emotionally, mentally, physically and spiritually is inconceivable. Dannielle Brown’s hunger strike is a powerful act of commitment to seeking the justice her son deserves. To sit idly and to watch a mother deteriorate at the expense of our silence is a heinous act we are all capable of committing. We must continue to support and listen to Black mothers fighting for justice. As mothers like Mirtes use their time and energy to study law and ensure that other mothers are able to seek justice, we must do what we can to uplift these women. This is why the Movement for Black Lives and its centering of Black female experiences, including motherhood, is so important. We must use our voices and resources to advocate and amplify the voices that so often go unheard.

“It is our duty to answer the knock at the door and receive social justice as the honored guest!”

A special thank you to the Alliance for Police Accountability for the image of Dannielle, and to Dannielle for sharing her story.

Resources to get involved:

Brown-Manning, Robyn. (2013). We don't give birth to thugs; we give birth to children: The Emotional Journeys of African-American Mothers Raising Sons under American Racism. City University of New York, ProQuest Dissertations Publishing, 3561574.

Gormley, K. (2020, July 5). JUSTICE FOR MARQUIS “JAYLEN” BROWN WHO FELL TO HIS DEATH AT DUQUESNE UNIVERSITY. Retrieved from https://www.change.org/p/duquesne-university-president-ken-gormley-justi...