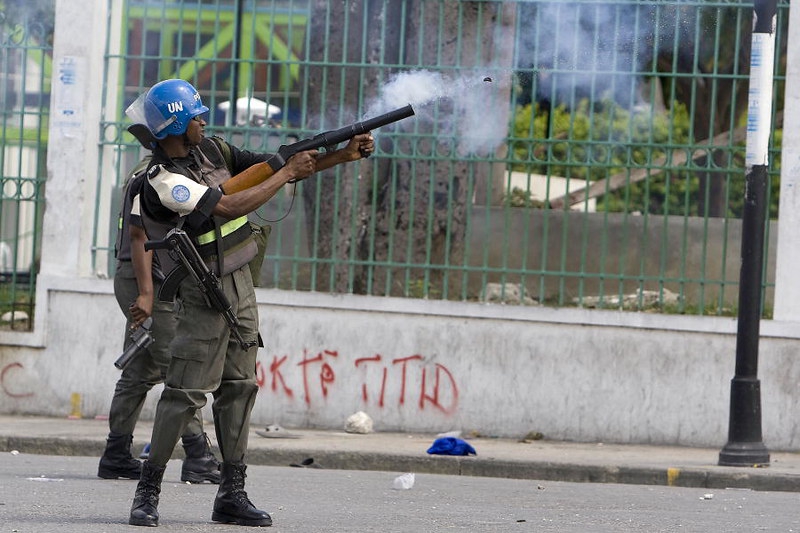 The United Nations Stabilization Mission in Haiti (MINUSTAH) was established in 2004 by the United Nations Security Council as a peacekeeping mission. Haiti is one of the most politically unstable countries in the Americas. Much of its instability results from recurring natural disasters as well as from multiple periods of politically motivated violence in leadership and amongst citizens (Paczynska, 2017). In 2004, then-President Jean-Bertrand Aristide was exiled due to growing unrest around accusations of electoral fraud and anti-government protests that turned into full scale rebellion (Pallardy, n.d.). As a result, Haiti reached the brink of civil war after decades of unstable leadership control, violent coups, and other complex pro-government vs. opposition agendas (Lemay-Hébert, 2015). This article will name a few operations headed by the United Nations (UN) and Brazilian military and overview the opposing perceptions of the mission: did MINUSTAH succeed in keeping the peace as the UN and partners portray, or was MINUSTAH the violent and suppressing power grab that Haitian citizens describe?

The peacekeeping mission essentially involved bringing a middle man into Haiti to temporarily occupy and control the country. Strategies for peacekeeping included implementing a temporary military take over that managed the country’s economic and political business while forces subdued rebellions and opposition throughout the country. MINUSTAH became a part of a pattern of Western powers deploying peacekeeping missions to Haiti with large amounts of international financial support (Beauvoir, 2017). MINUSTAH was met with much distrust as Haitians tend to view these missions as “suspicious packages” or “Trojan horses” (Beauvoir, 2017). Brazil headed MINUSTAH’s military component by maintaining their own top military generals in Haitian leadership positions, deploying the largest number of troops at 37,000 on rotation, and contributing a total of 1.85 billion dollars. Brazil’s physical and financial forces were to support the “disarmament, demobilization, reintegration, reform of the Haitian police; promotion of human rights; in organizing and monitoring elections in Haiti” (Lemay-Hébert, 2015).

The above assignments for MINUSTAH were to be largely completed by the Brazlian military via a policing manner. Haiti at the time had no formal conflicting groups but rather many aggressive and dispersed resistances that included but were not limited to political groups, gangs, and civilian rebels. The Brazilian military arrived in Haiti with instructions from captain Jair Bolsonaro and other military leaders that if “you found an element with a firearm, you shoot, and then you see what happened. You solve the problem” (Stargardter, 2018). These instructions governed the military strategies on the ground in order to secure control of the country and ensure that opposition would not hinder the country’s elections. The result of this strategy to gain control was several massacres, and targeted killings of gang and rebel leaders throughout the occupation.

The UN permitted soldiers to return fire if under attack as a logical defense, however, Hatian citizens accuse the peacekeepers of using excessive force. In 2005, for example, armed troops, vehicles, and helicopters went to Cite Soleil in Port-au-Prince to arrest a powerful gangster whom they inevitably killed. A violent exchange with over 22,000 bullets shot over several hours occurred, killing a contested amount of people (between 27-70), many of whom were bystanding women, children, and babies (Stargardter, 2018). Other examples of the UN’s excessive force are overviewed in a 2006 study released by Lancet Journal of Medicine attributing human rights abuses such as having around 8,000 people killed and 35,000 sexually assaulted in the Port-au-Prince areas within the military takeover between 2004-2006 (Pierre & Sprague, 2007). Additionally, the UN admitted to MINUSTAH’s role in the cholera outbreak in 2010 which killed over 10,000 people. An investigation determined a Nepalese UN peacekeeper base as the source of the outbreak that turned into an epidemic due to a “confluence of circumstances'' (WHO, 2012).

The mission left in 2017 once a newly elected Haitian government settled in. MINUSTAH was replaced by UN police in order to continue to support the Haitian government as it develops its security forces and governmental control (Manuel, 2017). The mission was deemed successful for several reasons. One measurement of success was MINUSTAH’s length of stay in Haiti. Previous missions left prematurely without achieving many of the set goals. 13 years of aid and control was read as an indication of the mission’s ability to attend the full extent of the situation in Haiti (Hamann & Teixeria, 2017). Additionally, the mission was considered successful for having killed gang and rebel leaders which ultimately put an end to their direct opposition. Another measure of success was the amount of aid brought to Haiti that peacekeepers distributed in response to the 2010 earthquake which killed around 9,000 people. In a published issue about Brazil’s participation in MINUSTAH by IGARAPÉ Insititute and Brazilian Peace Operations Joint Training Center (CCOPAB), the editors expressed an overall benefit to Brazil controlling much of MINUSTAH’s operations. Brazil is regarded as a leader in political international affairs having established replicable strategies that can be used in other countries or other peace missions (Hamann & Teixeria, 2017).

MINUSTAH deployed excessive military force as an acceptable peacekeeping strategy for controlling people in order to fulfill the goals of peacekeeping missions. However, these same strategies for peacekeeping are simultaneously labelled as misconduct by human rights activists who have filed lawsuits against the UN (Peltier, 2019). The country today has continuous violent outbreaks between citizens and police forces. It remains extremely contested whether MINUSTAH was beneficial for Haiti since the mission succeeded in establishing a stable government, or whether it was just another violent and unpeaceful occupation.

Bell, B. (December 6, 2017). Another Black Boy Gunned Down by Police. Huffpost. https://www.huffpost.com/entry/another-black-boy-gunned-down-by-police_b_6344818

Houston, A. (2014, June 18). In Their Court: Litigation Against the United Nations as a Last Resort for Haitian Cholera Victims. Health and Human Rights Journal. https://www.hhrjournal.org/2014/06/in-their-court-litigation-against-the-united-nations-as-a-last-resort-for-haitian-cholera-victims/