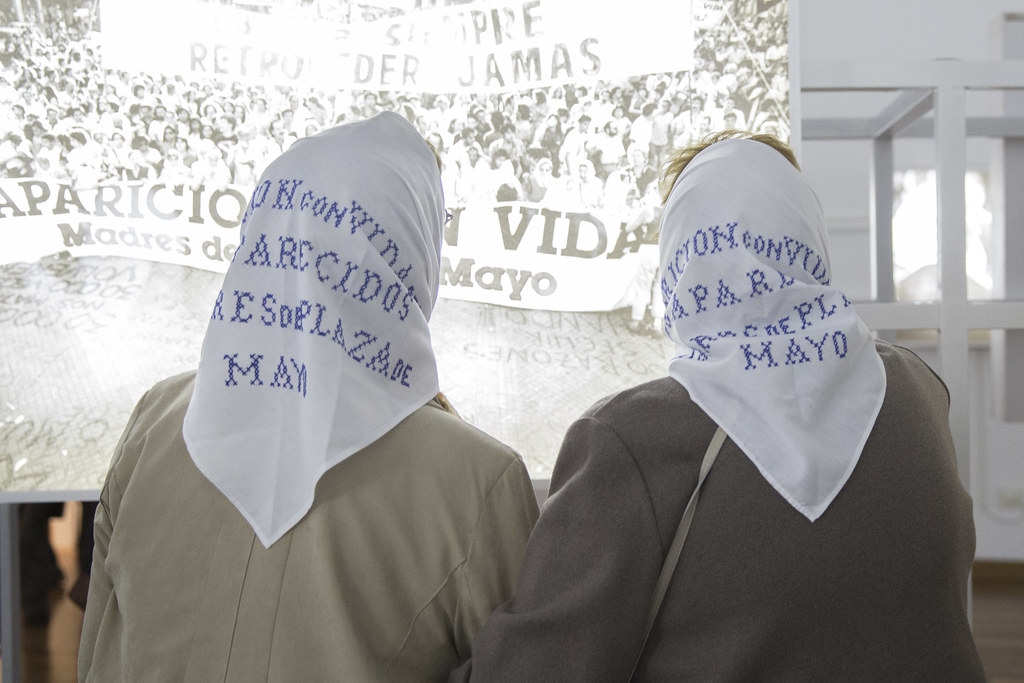 Despite the extreme cost that dissent could have, two sister organizations gained notoriety for taking a stand against these human rights violations, the Abuelas de Plaza de Mayo and the Madres de Plaza de Mayo.  Both organizations are named after the Plaza de Mayo in Buenos Aires, home of the presidential palace, where fourteen women first marched on April 30, 1977 (Goñi, 2017).  The Madres were the mothers of desaparecidos, while the Abuelas were the grandmothers of children who disappeared or mothers of pregnant desaparecidas.  While their composition was slightly different, their goal was largely the same—to call attention to the atrocities and to reunite with anyone they could.  Donning their now-iconic white headscarves, they ingeniously avoided a prohibited large gathering by walking in pairs (Goñi, 2017).  This protest continued every Thursday, even through the kidnapping and murder of several of members (Blakemore, 2019).  The dictatorship ended in 1983, in no small part due to the pressure of the Madres and Abuelas, and since then about 700 former members of the junta have been punished for their involvement in the Dirty War (Goñi, 2017).

Even after the military regime and many perpetrators were brought to justice, neither organization ceased its operations.  In fact, both organizations still exist to this day, and they have boasted some significant accomplishments in the years following the dictatorship’s fall.  The Abuelas, for example, have been able to track down 130 disappeared children and connect them with their biological families (History of Abuelas de Plaza de Mayo).  They have done so largely through the use of mitochondrial DNA testing, which is passed down from mother to child and therefore able to match a grandmother to a grandchild (Blakemore, 2019).  Additionally, they pushed the Argentinian government to create the National Committee for the Right to Identity to facilitate achieving their longstanding goal of uniting disappeared children with their families (History of Abuelas de Plaza de Mayo).  The most recent case solved by the Abuelas and their DNA testing occurred the summer of 2019, when they were able to connect Javier Matías Darroux Mijalchuk, the son of disappeared Elena Mijalchuk and Juan Manuel Darroux, with his remaining family (Abuelas, 2019).  Even as the dictatorship fell, the Abuelas’ work had just begun, and despite their old age, they have never stopped the search for their missing grandchildren and show no sign of doing so until they have solved every last case.

The Madres are perhaps even more active nowadays than the Abuelas but have a slightly more turbulent history.  The original organization split into two, with Hebe de Bonafini heading the dominant, still-existing branch (Goñi, 2017).  Bonafini, herself a mother of a desaparecido, is considered to be much more political than previous leaders of the organization and has gotten into trouble as a result (Goñi, 2017).  Bonafini was involved in an organization called Sueños Compartidos (“Shared Dreams” in English) that built low-income housing but was wrought with scandal after improperly using government funds (Hernandez, 2016).  The primary offenders were Sergio and Pablo Schoklender, and Bonafini was not directly implicated, but she nonetheless refused to cooperate with the courts, leading to an arrest warrant, though ultimately she escaped without any arrest or charges against her (Hernandez, 2016).  The controversy did not stop her from leading the organization to continue its fight.

Under Bonafini’s leadership, the Madres have turned into a more multidimensional organization than they were at the time of their original founding, largely due to her deep interest in politics.  Their primary purpose remains to remind Argentinians and people around the world of what happened and to bring to trial members of the military junta who are still walking free (Goñi, 2017).  The Madres still march weekly in Plaza de Mayo and have completed well over two thousand marches to date (Jueves en la Plaza).  Even in the face of the COVID-19 pandemic, the marches have continued online as a livestream reflection by Bonafini in her kitchen (Jueves en la Plaza).  In addition to streaming their online “marches,” the Madres have adapted to the 21st century and use virtually every social media platform.  Through these platforms, Bonafini hosts a weekly show called Mateando con Hebe, which often features guests such as authors and even government officials (Asociación Madres de Plaza de Mayo).

The Madres have also dipped their toes in current events.  Several members of the organization denounced former president Mauricio Macri for downplaying the number of desaparecidos and slowing down trials of the perpetrators, what they see as an erasure of the atrocities committed under the junta (Goñi, 2017).  Bonafini, a staunch ally of former left-wing presidents Néstor Kircher and Cristina Fernández de Kirchner, even further indicted Macri, saying that he had the potential to destroy all of the progress that had been made during the Kirchner years (Hernandez, 2016).  Additionally, during the COVID-19 pandemic, the Madres have launched a mural painting campaign to recognize frontline workers for their efforts (Comunicación Madres, 2020).  Mateando con Hebe has featured health officials as guests throughout this period (Asociación Madres de Plaza de Mayo).

The persistence of the Abuelas and Madres of Plaza de Mayo to stay active from the late 1970s to today offers several points of reflection.  First, they are a reminder that just because something appears in black and white in a history book does not mean that it is completely over and resolved.  The goals of both organizations still have yet to be fully realized, and the fact that original members still are in charge is evidence of the fact that these atrocities really did not happen that long ago.  Second, both the Madres and the Abuelas show that just because a particular leader or historical era came to pass in a literal sense does not mean that there was any actual closure to them.  Though now several decades old, the wounds of the military dictatorship are still raw and continue to penetrate Argentinian society and collective memory.  Finally, the Madres in particular give food for thought on how social movements can remain relevant years after the catalyst event during which they caught the world’s attention.  The Madres have stuck to their core values and activities but also expanded and adapted to the times.  They have managed to overcome controversy to stay relevant.  The decade of the 2020s is off to a powerful start as many important social issues have come to a head.  Even as issues like racial justice and healthcare inequalities start to dissipate from the front page, these issues still exist and continue to bring real harm to real human beings.  Leaders of these movements may find inspiration in organizations like the Madres and Abuelas for staying relevant and making an impact even when the whole world’s eyes are not watching them.

Hernandez, A. (2016, Aug. 5). An Argentine civil rights heroine is embroiled in an alleged scam. Vice. https://www.vice.com/en/article/59e8dd/an-argentine-civil-rights-heroine...