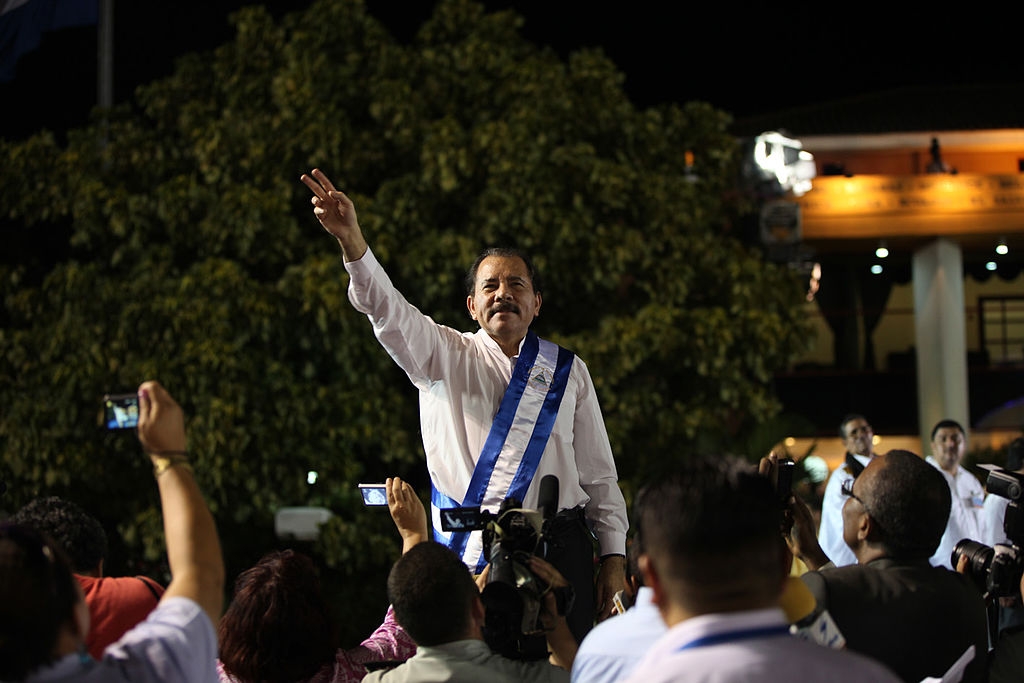 Nicaragua held its presidential elections last week, and current president Daniel Ortega was elected unanimously for the fourth time, garnering 72% of votes with his wife, Rosario Murillo, as his running mate (Wroughton & Pretel, 2016). The next closest competitor, center-right candidate Maximino Rodriguez, only managed to amass 14.2% of the vote (BBC, 2016). This was no surprise, as in previous months, the courts blocked the main opposition coalition from participating in the election. Mr. Ortega controls the courts and Nicaragua’s electoral authorities, according to analysts and opposition leaders (Montes, 2016). Additionally, International election observers were banned by Nicaragua from overseeing the casting of ballots, adding to the controversy of Ortega’s third consecutive term since 2006.

The United States has noted the seemingly controlled aspect of the elections and raised concern regarding Ortega’s increasingly authoritarian tendencies. Additionally, many see Ortega’s number of years as president and incorporation of family members in government as the building of a family dynasty, a legacy only recently ended with the Sandinista Revolution against the long-ruling Somoza family in 1979. At the same time, because Ortega’s leadership has cut poverty by 13 percent and the economy has achieved 5 percent average GDP growth, some are content with the continuing domination of Ortega and the FSLN (revolutionary group of led by Ortega in 1980s and now a political party). But how democratic is Nicaragua under Ortega and the FSLN currently?
To answer this question, it is important to recognize that democracy is defined by many aspects of a society and its government, and democracy is much more of a spectrum than a typology. Still, there are specific and extremely important ways to measure the extent of democracy of a nation based on international standards. Freedom House, a well-known organization that annually measures the degree of democracy in countries around the globe, has concrete data on Nicaragua.
Freedom House ranks countries as being Not Free, Partly Free, or Free on a scale from 1 to 7, 1 being Free and 7 being Not Free. Examples of Free countries in the Western Hemisphere include the U.S., Brazil, Chile, and Argentina with scores of 1 or 2. On the other end, Not Free countries like Cuba earn a 6.5. The organization assigns these values based on evaluations on electoral processes, freedom of expression and belief, and rule of law among other factors, which can all be found in the reports on their website (see https://freedomhouse.org).
Overall, Nicaragua is somewhat democratic, with a status of Partly Free and score of 3.5 as of 2016, but there are certain areas that are not ranking well. On multiple fronts (Congress, Supreme Court, Labor Unions) the domination of the FSLN in decision-making and suppression of competition has provoked complaints of being ignored by minorities, especially the indigenous inhabitants of Nicaragua’s eastern and Caribbean regions (Freedom House, 2016). With regard to the functioning of government, Nicaragua is ranked 130 out of 168 countries surveyed in Transparency International’s 2015 Corruption Perceptions Index, and so has much room for improvement. Ortega has also appointed his sons and daughters to prominent positions, such as ambassador and presidential adviser and his wife, who previously served, appropriately, as First Lady is now Vice President. These areas will require modifications to become more democratic in the future.

A follow up question to this understanding of Nicaragua is: how successful are they economically as a Partly Free nation? The weaker an economy, the more likely it is that political unrest will be present (something Venezuela is currently grappling with). To measure this, economic indicators like growth in GDP, levels of poverty, and FDI (Foreign Direct Investment) can give an idea of how the country is faring.

According to the World Bank, the country is making quick progress, but still has many challenges to overcome. Nicaragua has been experiencing strong growth in the last few years and greater macroeconomic stability, and will likely average 4.4 percent growth in GDP this year. Between 2009 and 2014, general poverty was reduced from 42.5 percent to 29.6 percent and extreme poverty cut from to 14.6 to 8.3, in large part through Ortega’s leadership (World Bank, 2016). Finally, FDI totaled $201 million in U.S. dollars, very low compared to most other countries in the region, with Costa Rica attracting $2.2 billion in the same year (Dyer, 2014).

Nicaragua remains the poorest nation in Latin America after Haiti, and is still recovering from decades of dictatorship, a bloody civil war, and natural disasters. In addition, it is in the middle of the drug trafficking routes to the U.S., which has been problematic (BBC, 2016).

In spite of these obstacles, the country is making swift progress in development. Hopefully, Ortega’s leadership will continue this progress and will help shore up democratic institutions for future generations of Nicaraguans.