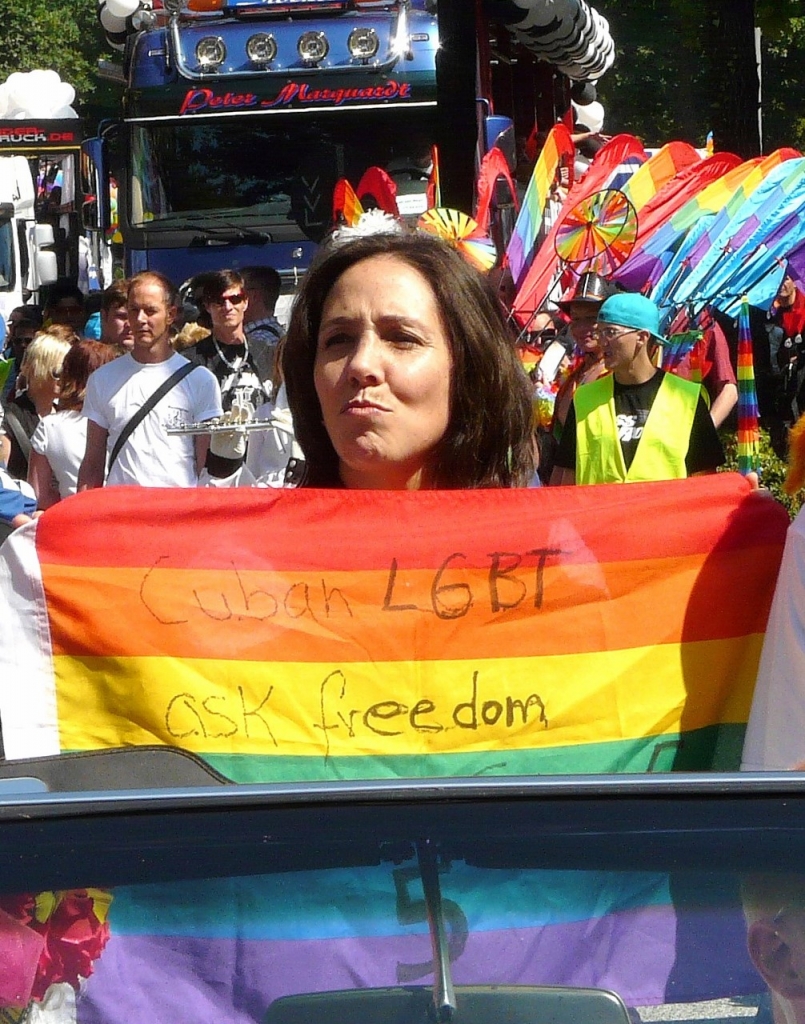 Mariela Castro Espin, the daughter of Cuban president Raul Castro and the late former president Fidel Castro, has been creating her own revolution. Espin is fighting for the equality that the Cuban revolution had promised even if it means that she is fighting against her own family. Her cause? The LGBT community in Cuba. A community that was ostracized and tortured for decades when Fidel Castro ordered LGBT individuals to be sent to labor camps also known as “re-education camps”(1). Those who had HIV/AIDS were quarantined and isolated from the rest of society.

Now there is a new Castro trying to revolutionize Cuba and right the wrongs of the past. Espin, a heterosexual married woman with three children, has become a figurehead for the LGBT rights movement (2). When asked why she has made LGBT rights her lifework, she stated, “ I realized nobody else would take on this task … and I did it for the good of Cuba.” She cites her mother as the one who first introduced her to the importance of this work. Her mother, Vilma Espin,  was also a social activist fighting for women’s rights with the Federation of Cuban women before she created the Cuban National Center for Sexual Education (CENESEX). Vilma Espin was revolutionary in her fight to include gender-reassignment surgery in national health care in 1988. While it did not pass at that time, it did finally pass in 2008 when Mariela Castro Espin took up the cause as the head of CENESEX (3).

Despite her mother’s focus on these issues, she admits that as a child she was part of the problem. She explains that she “was born into a homophobic society” and that as a child she “laughed at gays, made fun of them.” It wasn’t until she was challenged by her LGBT friends to take time to understand them and their struggles, that she gained awareness of homophobia(4). Espin has been open about the struggles against her own father and uncle in order to fight for LGBT rights. At one point she admitted, “Sometimes my father is ashamed to support me. It hurts, but that’s the way it is”(5).  Other times, she is more optimistic about how the revolution has changed over time. She has stated that her father “understands that it’s an act of social justice” and that through the years, her father and uncle have changed (6). The most momentous sign of this change was in 2010, when Fidel Castro admitted wrongdoings against LGBT Cubans, stating “Yes, there were moments of great injustice”(7).

Mariela Castro Espin is working to continuously push her family and her country to truly enact policy emblematic of the revolutionary ideals of equality for all. In order to do this, she has gone beyond just challenging her father’s positions to challenging the entire legal structure of Cuba. In 2013, she used her position as a member of Cuba’s parliament to break down the previous structure of Cuban parliament by voting no on a workers’ rights bill. This was the first time in modern history that the Cuban parliament had not voted unanimously on a bill. She received a great deal of criticism for breaking the mold in order to protest the fact that the bill did not specifically protect individuals based on their gender identity, sexual orientation or HIV status (8). In her words, her vote was one step in a longer process to “perfect the democratic participation of the representatives within the Assembly”(9). She hopes that greater discussion in the Assembly will help more minority voices to be heard and greater equality to be represented in the laws.

Beyond her major legislative goals, to local Cubans she is most known for her great empathy. She does outreach events all over Cuba, hunting for LGBT individuals in need of assistance in even the most remote places. Espin also puts on events allowing locals to testify about their own experiences of discrimination and have a platform to share their story. Despite her efforts to improve the lives of LGBT Cubans, she still faces criticism for being too close to the LGBT community’s former oppressors. She does not shy away from criticism. When confronted by a former resident of the forced labor camp, Espin was quick to say “We will remember it , so it will never happen again. I am very sorry” (10). The recent death of Fidel Castro has brought to light many questions about the future of Cuba and the LGBT community. Will public opinion or new leadership guide policy towards LGBT persons? Will that policy fight for the revolutionary ideals of equality for all, regardless of of gender identity and sexual orientation? While the future is unclear for Cuba, one thing that is clear is that Mariela Castro has no intention of giving up her fight to protect the LGBT community.