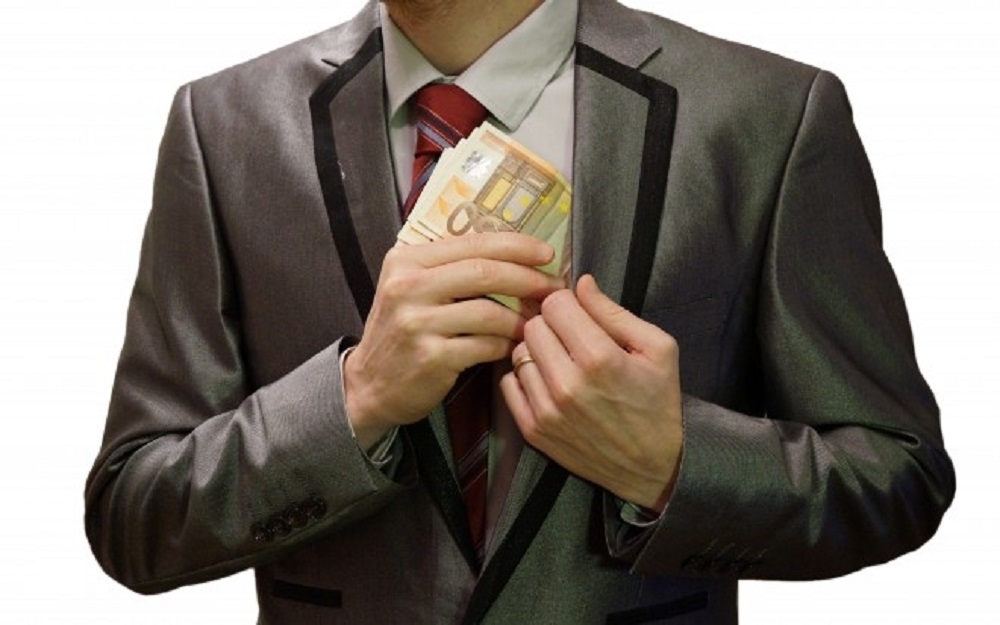 Academic and policy discussion have generally tended to underestimate the role that citizens play in sustaining and reproducing the phenomenon of corruption, traditionally favoring approaches focused on official actors such as bureaucrats and politicians. The impact that citizens have in the overall level of corruption in a given society, however, can only be ignored at a great risk. Manzetti (2000) posits that high levels of corruption take place when three factors are present: First, checks and balances are weak or ignored; two, there is no self-restraint; and third, there is popular acceptance and tolerance of malfeasance. Indeed, according to Bergman (2009), interaction between voluntary compliance and enforcement can develop in a stable environment of compliance or noncompliance equilibrium. In other words, the behavior of citizens becomes a crucial element behind the pervasiveness of the corruption phenomenon. Despite the importance of conducting scientific research into this line of argumentation, however, “there has been almost no systematic, cross-national research into the determinants of citizens’ tolerance of corruption” (Blake, 2009, p. 96), and this deficit is reflected in, and interacts with, the lack of a proper operationalization of corruption tolerance.

The first step to address a concept of corruption tolerance among members of the public is to determine its reach. While the definition of corruption spells the misuse of public office for private gain, indeed highlighting the central position of official actors, it is more productive here to think of a corrupt transaction as following a tripartite model: It involves the presence of a benefactor (usually a private actor), a beneficiary (usually a public official), and an affected party (society at large) (Spengler, 2010, p. 8; Karklins, 2005, p. 155). In this sense, while the traditional definition of corruption requires the participation of an official actor, citizens, on the other hand, can actually account for two-thirds of the tripartite model: they can be a direct party to the transaction, acting as benefactors in cases of bribery and other forms of petty corruption, and they also fall under the constant role of affected party in cases of political corruption. Thus, the role of the citizen in sustaining malfeasance follows naturally the division between low-level and high-level corruption, pointing at a necessary differentiation between the two. Thinking of a definition for the concept of corruption tolerance, then, it is appropriate to think of it as both (a) the citizen’s willingness to engage in corruption (Pozsgai Alvarez, 2015), and (b) the citizen’s support for corrupt politicians (Pozsgai Alvarez, 2014).

1 Developing an indicator to measure LCT

In the past decade, the few studies that included LCT as a measurable variable chose to operationalize it as a type of attitude or opinion towards bribery (Moreno, 2002; Sautu, 2002; Del Castillo and Guerrero, 2003; Blake, 2009, among others), relying for such reason on polls and surveys as the only source of data. The importance of LCT, however, resides on the impact it has on actual levels of corruption in a country, and so the employment of attitudinal measures makes the implicit but obvious assumption that we can obtain an accurate measurement of people’s behavior by looking into their answers to archetypal cases of bureaucratic corruption. That premise, which becomes the cornerstone to such measurements of LCT, is nonetheless highly flawed.

The problem of attitude-behavior congruency was for a long time regarded as the biggest impediment to accept any theory based on attitudes and personal traits as determinants of human behavior, due to its long and consistent lack of statistically significant validation through empirical data. To address this issue, Ajzen and Fishbein (1977) proposed that, for both verbal and non-verbal indicators to be compatible, at least their target and action elements should be assessed at identical levels of generality or specificity. Translated to the discussion over LCT, Ajzen and Fishbein’s argument suggests that, in order to predict actual behavior, survey questions would need to begin by addressing the citizen’s attitudes towards personally engaging in bribery, rather than enquiring about the acceptability of bribery itself as a third-party event; this is, to address the behavior rather than the object, and to connect it directly to the respondent rather than to a hypothetical actor. The attention to target and action is what Ajzen and Fishbein called the principle of compatibility. To make behavioral prediction even more accurate, furthermore, these authors postulated that action is immediately determined by an intention to perform it, and that in turn this intention is a function of three variables: attitudes, subjective norm, and perceived behavioral control. Thus, attitudinal assessments of LCT would represent only one of three necessary sources of data to predict a person’s decision to engage or refrain from bribery, as reflected in the Theory of Planned Behavior (TPB) (Ajzen, 1985) shown in Figure 1.

Following the theoretical tenets of the TPB, it is possible to suggest that attitudes towards bribery, even when operationalized following the principle of compatibility, can only work as a proxy for the measurement of actual behavior when assessed in combination with subjective norm and perceived control; and even then, it still would inform only about the citizen’s actions, and not about the occurrence of actual corruption, as there is still the matter of actual control over engaging in this illicit activity.

The issue of control over bribery brings us to a second but related area where a purely attitudinal account of LCT would seem to be insufficient: Low-level corruption can be subdivided into collusive and extortive activities, following the two most significant dynamics between benefactor and beneficiary. In cases of collusive corruption, as the term implies, both public official and private citizen stand to gain from engaging in corruption as compared to following the law, and therefore it suggests the presence of greed from the citizen’s part; in cases of extortive corruption, on the other hand, it is the government official who initiates the transaction, relying on the citizen’s need for the service. Greed and need corruption, therefore, describe the citizen’s motivation to bribe rather than focusing on the two-party scheme, and it is more revealing of the citizen’s role in sustaining corruption as it suggests that attitudes and behavior are more aligned during cases of collusion than they are during cases of extortion: Assuming the presence of a corruptible but passive public official, a citizen’s negative attitude towards bribery might have some impact over the occurrence of a corrupt transaction, whereas the combination of a predatory official and a citizen’s negative attitude would only be relevant to behavior when that same citizen has the capacity to forego access to the public service. Therefore, prompted by the theoretical significance of perceived behavioral control of the TPB, there is also a clear need to disaggregate LCT between greed and need corruption in order to assess the connection between attitudes and behavior.

2 Empirical assessment of attitudes as an indicator for LCT

To test the capacity of an attitudinal operationalization of LCT to predict actual behavior, Pozsgai Alvarez (2015) looks at the case of Peru employing survey data from the 2006 AmericasBarometer, provided by the Vanderbilt University’s Latin American Public Opinion Project (LAPOP). First, by dividing the subjects between those who faced corruption victimization (“During the last year has any public official asked you for a bribe?”) and those who did not, cases of extortion and collusion were identified. To prove the feasibility of this strategy, Pozsgai Alvarez found that victimization diminished the level of citizen satisfaction with public services (-0.48 towards municipal offices, -0.54 towards court officers, both at p≤0.01), and that it also had a large and statistically significant influence over the decision to pay a bribe or not (3.09, p≤0.001), just as expected.

Conducting ordered logistic regression analysis, the impact of attitudes (as measured by the reported justifiability of bribery due to poor public services) over an action-based LCT indicator (for the subset of cases that were not victimized) is presented in Table 1, telling the collusive (greed) part of the story between attitudes and behavior. Then, the case for need LCT is presented in Table 2, repeating the regression for the subset of cases that were in fact victimized, and testing the impact of general attitudes towards bribery over behavioral response. 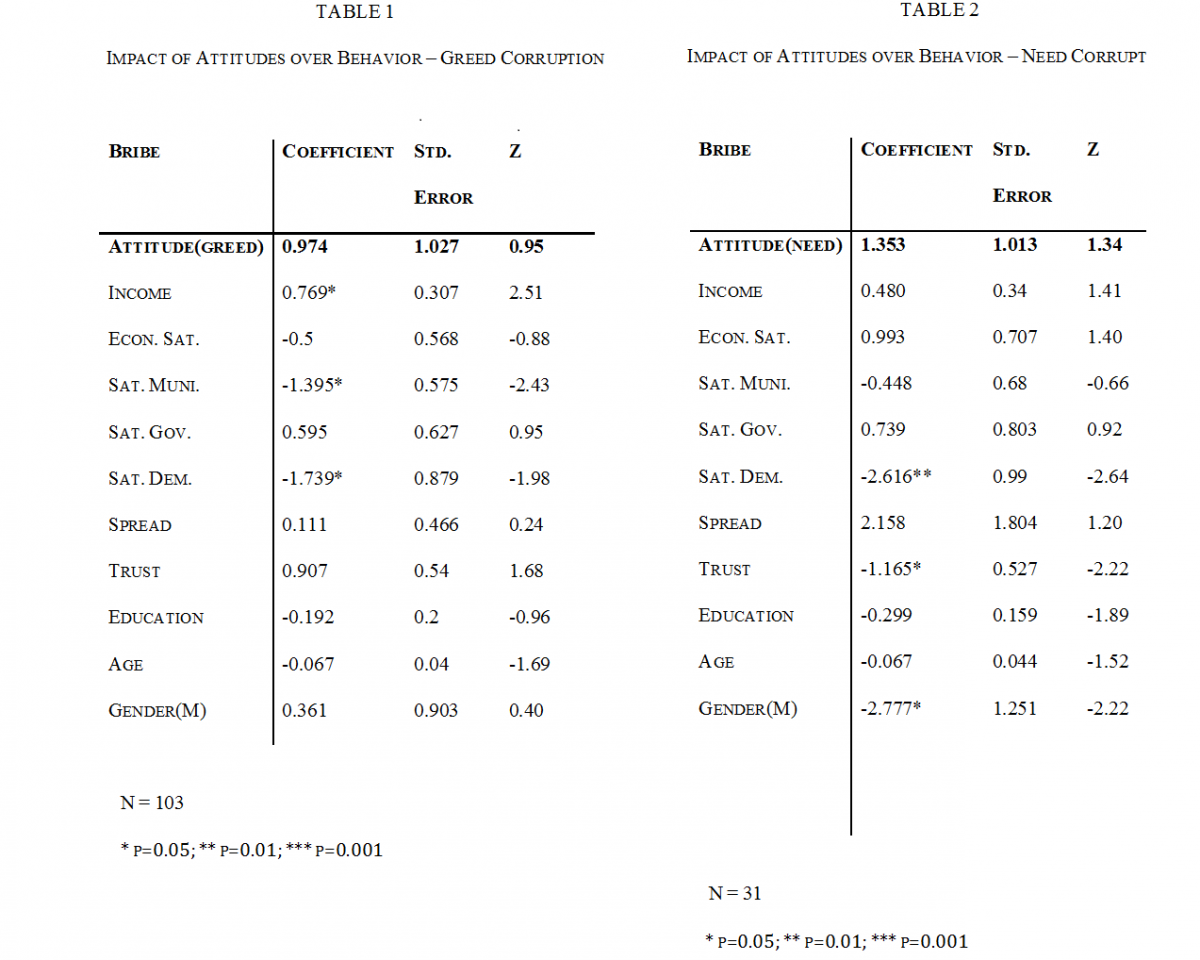 In both cases of greed and need LCT, the empirical analysis found no statistical significance for the traditionally assumed relation between attitudes and behavior regarding bribery.

On the other hand, it is possible to appreciate the importance of adopting a strictly action-based approach when measuring LCT in the similar trends followed by the incidence of bribery (as measured by Transparency International’s Global Corruption Barometer) and that of general, system-wide corruption (as measured by the Corruption Perception Index). The comparison between both trends in Latin America can be observed in Figure 2. 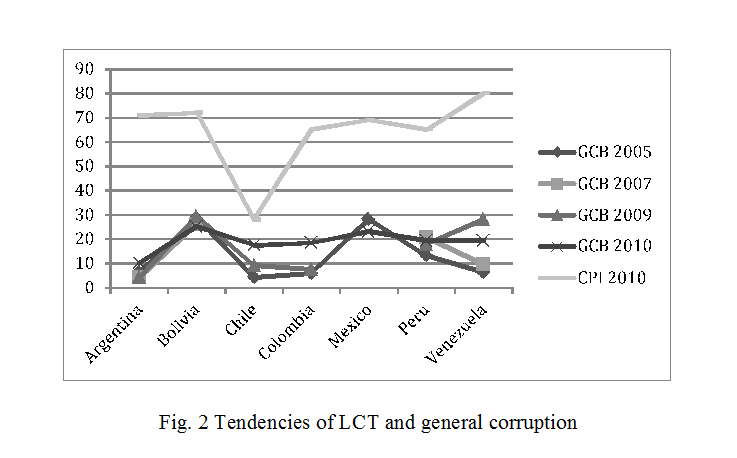 Figure 2 shows that, with the exception of Venezuela, the levels of corruption accounted for by the Corruption Perception Index generally follow the international variations in citizens’ reports of actual bribery.

The role of the citizen in sustaining overall corruption in a country is deeper and more complex than traditionally considered: citizens are major actors in allowing grand and petty corruption to persist, first, by supporting corrupt politicians in spite of incriminating information, and second, by actively engaging in bribery of public officials. For these reasons, a scientific study of corruption requires a proper understanding of the dynamics surrounding popular corruption tolerance, starting with an indicator that could better measure the phenomenon of interest than that which scholars have been employing for the last decade and a half.

Attitudes, as was discussed, introduce a level of error that hinders its employment as a proxy for actual behavior, and so they result in a faulty measurement approach to low-level corruption tolerance. When defining corruption tolerance in respect to its significance to actual corruption in society, therefore, the field has much to gain from adopting an action-based approach combined with a deeper consideration to the type of behavior we want to focus on, be it collusion or extortion.

For a more thorough discussion on low-level corruption tolerance and its operationalization, visit: http://journals.sub.uni-hamburg.de/giga/jpla/article/view/855. A discussion on high-level corruption tolerance can also be found at: https://tsukuba.repo.nii.ac.jp/?action=pages_view_main&active_action=repository_view_main_item_detail&item_id=32663&item_no=1&page_id=13&block_id=83.

Ajzen, Icek (1985), From Intentions to Actions: A Theory of Planned Behavior, in: J. Kuhl and J. Beckmann (eds), Action-control: From Cognition to Behavior, Heidelberg: Springer, 11–39.

Bergman, Marcelo (2009), Tax Evasion and the Rule of Law in Latin America: The Political Culture of Cheating and Compliance in Argentina and Chile, Pennsylvania: The Pennsylvania State University Press.

Karklins, Rasma (2005), The System Made Me Do It: Corruption in Postcommunist Societies, Armonk, NY: M. E. Sharpe. 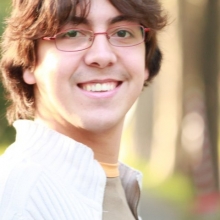 Joseph Pozsgai Alvarez
Joseph Pozsgai Alvarez is a political scientist and researcher in the University of Tsukuba, Japan. His area of specialisation covers corruption issues and anti-corruption policies, with a focus on the Latin American region. His current research examines the emergence and evolution of international anti-corruption bodies in Central America's Northern Triangle against the backdrop of domestic political interests.