Latin@s & the US Election 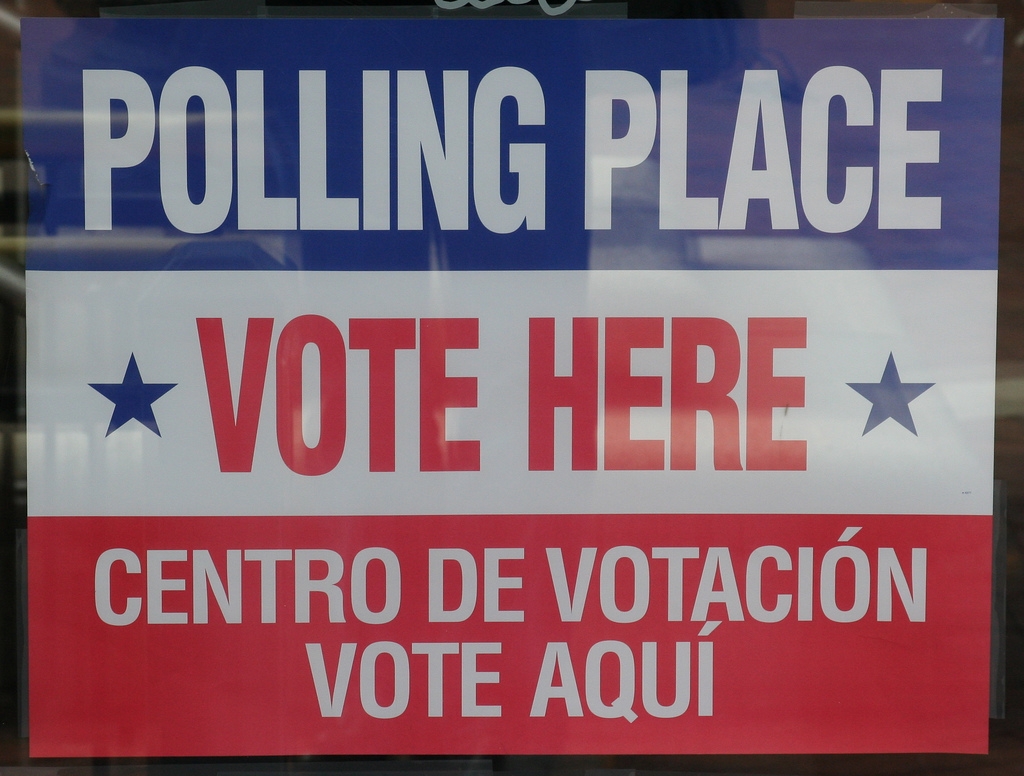 This past week the University of Pittsburgh’s Center for Latin American Studies was excited to host a discussion led by its director Scott Morgenstern titled “Latinos & the US Election.”  The presentation explored Latino voting trends, how they are influenced, and - what everybody is wondering about - its potential impact on Tuesday’s election.  The following is a summary of dialogue that ensued.

In Figure 1 we can observe that while a majority of Latinos have long tended towards the Democratic candidate, there has never been a strong, persistent pattern. Rather, the percentage of Latino voters leaning a certain way has always swayed depending on each election’s candidates and issues.  We see a large divide in President Obama’s 2012 election, but just eight years earlier with the race between George W. Bush and John Kerry the gap was nearly closed between the two parties. 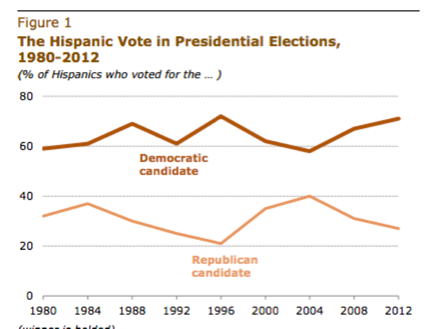 Above graph taken from a slide from the following:

Professor Morgenstern followed this data with the inference that Latinos “do not fit comfortably in either party.”  This means that Latinos often hold opposing viewpoints, and thus they do not fit comfortably in either of the parties.  For example, in the social realm Professor Morgenstern noted that many oppose abortion rights, a viewpoint generally held by Republicans, but are also in favor of social and welfare programs, a characteristic often associated with Democrats.  Furthermore, many are young (Democrats) but also have limited education (Republicans).  Further, their countries of origin (or that of their parents and grandparents) -Mexico, Puerto Rico, Cuba, etc--also have conservative and liberal parties.  All of this leads to an important conclusion: Latinos can be swayed.

This becomes especially important when focusing on turnout rates.  As the following figure from the presentation shows, in 2012 only 11.2 million Latinos voted out of the potential 23.3 million.  Compared with the turnout of black and white voters (which is over 60%), Latinos only have a relatively low 48% turnout rate.  As this number of eligible voters is projected to continue increasing in this and future elections, candidates have a great (but difficult) opportunity to mobilize these voters.  And while the concentration of Latino voters is largely in non-battleground states, there is big potential for their impact in states such as Texas, Arizona, and Florida the coming years.  They can also have important impact in state and local elections in California and other non-swing states. 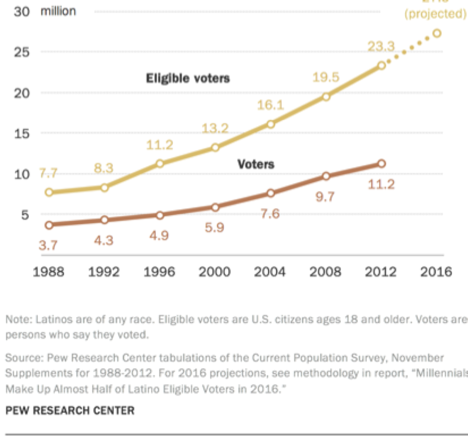 The Latino population is growing quickly in the United States – right now it represents 18% of the electorate.  Of these, 65% and counting were born in the U.S.  Their impact is growing in Texas, Arizona, and Nevada, and the face of these voters is quickly changing as there are less and less anti-Castro voters in Florida and fewer identifying as Catholics.

So while Latino voters have stakes in both parties and can be pulled towards either side, the Republican party has faltered a bit when trying to reach this demographic; in earlier elections the majority of stumbles occurred over immigration reform.  In fact, anti-immigration bills in California moved Latinos from being equally split between parties to heavily Democratic.  Using polls done during the primaries, Professor Morgenstern noted that in this year’s election, Donald Trump was the Republican candidate who enjoyed the least Latino support, with 17% behind his campaign and 72% backing Hillary Clinton.  His opponent Jeb Bush actually wielded 32% of this Latino vote in that poll, reducing Clinton’s majority to 60%.

Today, Professor Morgenstern explained, while Latinos are as concerned with immigration reform, surveys suggest that they are more concerned with education, jobs, and health care.  Figure 3 shows, only about one-third of Latinos were disappointed or angered by Obama’s decision to delay executive action for unauthorized immigrants. 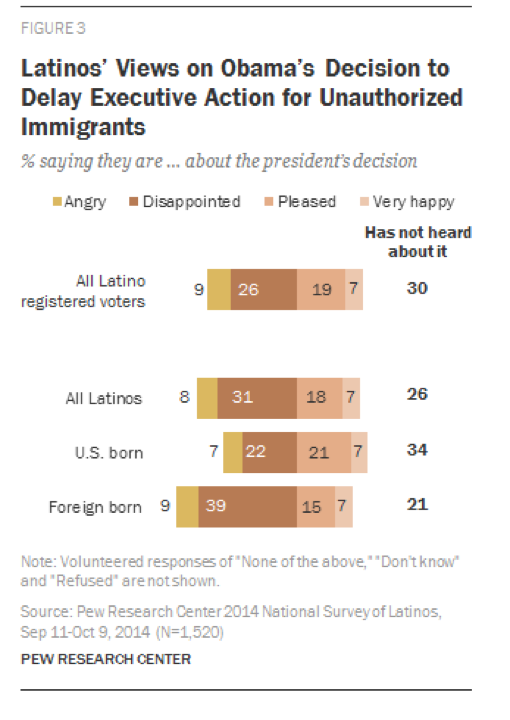 It is important to note as well the differences amongst Latinos; the percentages displayed in the slide show a strong female preference towards Clinton and Democrats, as well as a tendency for older voters and those with less than a high school education to vote similarly.  Republicans were more likely to grab the vote of males, those under thirty years old, and Latinos holding at least a college degree. 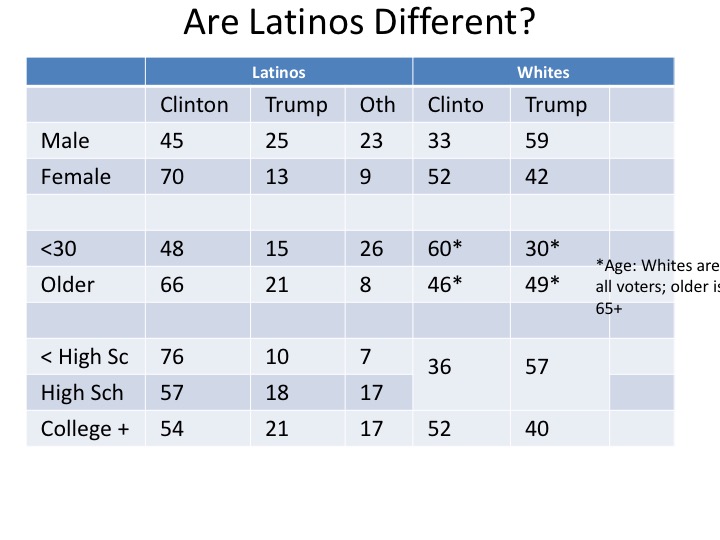 Data in the above chart compiled from information from the following sources:

Kirk, Ashley and Scott, Patrick. 2016. “US election: How age, race and education are deciding factors in the race for President.” 2 November. The Telegraph. Available here: http://www.telegraph.co.uk/news/0/us-election-how-age-race-and-education...

Professor Morgenstern reiterated that while Latinos are an incredibly diverse group of people, they are more unified this year, and because of their inclination to be policy voters the majority of them are leaning towards the Democratic party. However, many are falling through the cracks, as is evident in their poor turnout, and it will be interesting to see how they are fought over and the extent of their impact in the coming years.