Keiko Fujimori released from prison in times of Covid-19 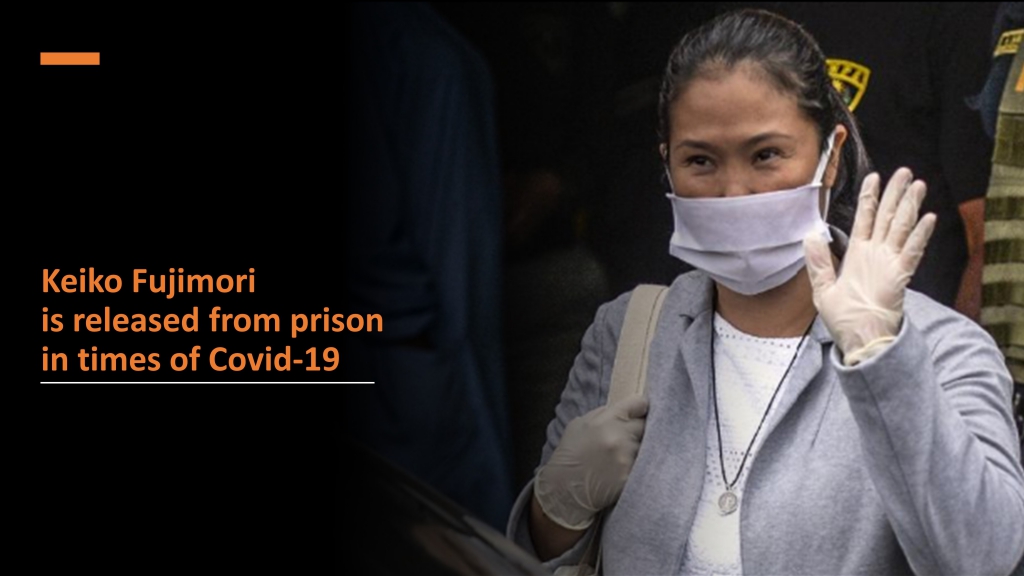 In 2018, Keiko Sofia Fujimori Higuchi, also known as Mrs. K, the former Peruvian President’s daughter, was convicted to 36 months of preventive prison due to “serious suspicions” of money laundering in the financing of her presidential electoral campaign back in 2011. In a statement, the judge of the First National Preparatory Investigation Court, Richard Concepción Carhuancho, states that “Fujimori led a criminal organization concealed in Fuerza Popular, that captured illicit money to gain political power and repay it with acts of corruption.” At the time, Carhuancho also stated that Fujimori, who was accused of aggravated money laundering, could be at least ten years in prison (La Vanguardia, 2018).

Keiko Fujimori, a leader of Fuerza Popular, is investigated for being the head of a criminal organization dedicated to money laundering related to the case Odebrecht and other companies (La Republica, 2020). Fujimori is accused of accepting $1.2 million in funding from Odebrecht that concealed in Fuerza Popular and used to finance her presidential electoral campaigns in 2011 and 2016. It is estimated that Odebrecht paid at least $29 million to Peruvian officials, including former Presidents Ollanta Humala, Toledo, Kuczynski, and Garcia (France 24, 2020). The allegations against Fujimori also include obstruction of justice and bribery from large Peruvian companies such as the Banco de Crédito del Perú (BCP). Due to these charges, Fujimori has been in jail since last January when the judge, Víctor Zúñiga ordered Fujimori’s detention as part of the investigation process.

However, on April 30, the National Superior Court of Specialized Criminal Justice, led by the judges Rómulo Carcausto, Sonia Torre, and Edgar Medina, revoked the order of 15 months of preventive detention that weighed against Fujimori. Instead, they ordered a restricted release for Keiko Fujimori subject to payment of a bail of 70,000 Peruvian soles or approximately $ 20,500 and subject to less severe restrictions (El Comercio, 2020).

Thus, under restricted release, Keiko Fujimori must register her fingerprint every 30 days in the Office of Registration and Biometric Control and show in court to report and justify her activities. Also, she must appear to the authorities of the Judiciary or the Public Ministry when necessary. Moreover, she is prohibited from communicating with co-defendants, witnesses, or other bodies of evidence, either personally or through third parties, or by using any technological form until the process concludes (El Comercio, 2020). This last restriction includes her husband, Mark Vito Villanella, who also is under investigation for the same crime. “A restriction observed by Fujimori’s lawyer and that she declared will ask the Judiciary for clarification, since both share the same home” (RPP, 2020)

The arguments used by the court in the case Fujimori states that the preventive detention of Fujimori did not guarantee to stop the accused from using third parties to threaten or induce witnesses or collaborators; however, the prohibition under penalty of revoking the measure may achieve better results. The court also stated that the evidence provided by the prosecution against Fujimori is not sufficient by itself to dictate preventive detention, more considering that the organ in charge of criminal prosecution does not show the due diligence to bring Fujimori to trial in the shortest possible time. Moreover, after a certain period, the seriousness of the crime and the eventual severity of the sentence is not sufficient for Fujimori to continue in preventive detention since the danger of concealment or leakage decreases as the duration of the measure increases (El Comercio, 2020). In other words, Fujimori does not present the risk of escape or justice obstruction. (La Republica, 2020).

However, Fujimori’s lawyers are now leveraging COVID-19 to relax prison restrictions. Giulliana Loza, the Fujimori’s lawyer, presented a request alleging Fujimori’s risk of contagion of COVID-19. She states that Fujimori was a member of the group of vulnerable people from suffering coronavirus since Keiko is hypertensive and suffers from arrhythmia while emphasizing the high-risk of virus contagion due to the prison terms. The court also considered the recommendation of the Inter-American Commission on Human Rights on reviewing and adopting measures to deal with jail’s overcrowding; thus, judges reevaluate cases of preventive prison, including Fujimori’s case (La Republica, 2020).

The release of Keiko Fujimori raised reactions in favor of and against it. To the prosecutor José Domingo Pérez, “the release of Fujimori was an arbitrary decision because Fujimori has been imposed the obligation to pay a bail of 70,000 Peruvian soles or $ 20,500 without taking into account that in the investigation it was proven that she received millions in cash from Dionisio Romero (BCP Chairman) and other businessmen. Also, the judges of the Appeals Chamber have not disputed that Fujimori has stopped obstructing the prosecution’s investigation” (El Comercio, 2020). On the other hand, former minister associated with the Fuerza Popular party like Luisa Maria Cuculiza emphasizes that “it is time to put hate aside and act humanely,” referring to Fujimori’s release in times of pandemic.

Keiko first was condemned to preventive detention in November 2018; after a polemic decision of the Constitutional court, she was released in November 2019, but after two months, the justice ordered Fujimori’s return to jail (ABC International, 2020). On May 4, Keiko Fujimori left the Chorrillos Women’s Annex prison, wearing a face mask and gloves. She said that before meeting with her family, she would take a COVID-19 test to avoid the risk of contagion. In national media, it was shown that a person from a private laboratory was waiting outside Fujimori’s home to test her for Coronavirus.

In Peru, the SARS-CoV-2 is being used by lawyers to release or relax imprisonment of previously indicted political players; together with Fujimori, also two former mayors of Lima, one investigated for an alleged crime of money laundering Suzana Villarán and another investigated for the case Odebrecht Luis Castañeda Lossio have revoked their preventive detention and imposed house arrest (RPP, 2020). While the COVID-19 pandemic is drawing the world’s attention, the media is letting what would previously be considered a scandal to slip its fingers. We should remember that while the pandemic is a serious health threat, we must keep the safeguards of justice and political institutions.