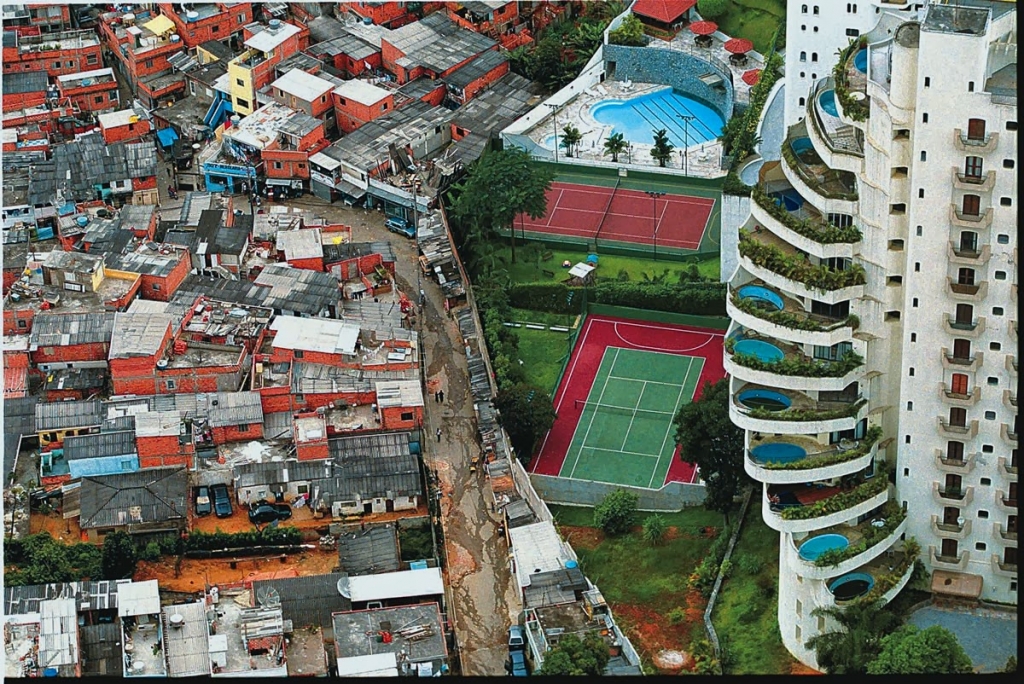 Since 1980, the poverty rate in Latin America has fallen 30%, a third of the decline due to progressive shifts in the income distribution.1 In 2000, a quarter of the region (25 in every 100 Latin Americans) lived on less than $2.50 a day. Today, fewer than 14 in every 100 do.2 Since roughly 2002, falling income inequality is visible in the entirety of the heterogeneous region: among commodity driven economies such as Peru and manufacturing dominant ones such as Mexico. How can one explain the common outcome given the diversity of the region’s makeup? The Economist has called the experience of an expanding middle class in Latin America a rare combination of faster economic growth, low unemployment and falling income inequality.3

Improved external conditions as well as endogenous changes have together promoted falling income inequality in Latin America. The period of the late 1990s to early 2000s was one of boosted export-led growth and increasing terms of trade in the region catalyzing boosted incomes, employment and government.4 Domestically, activity rates of the poor have risen, as has both enrollment and completion of secondary education. The education gap is shrinking. This greatly explains the falling skill premium. In other words, the return to education began to decrease. As union power resumed and wage bargaining grew, minimum wages were raised, even further closing the wage gap between skilled and unskilled laborers.4 Poverty and inequality rates began to fall as GDP continued to spike.

When many reforms were instituted around 2002, Latin American revealed an income Gini coefficient of over .53. By 2008, the region as a whole became more equal, dropping to under .51.5 Although it is evident the fall in income inequality experienced in Latin America post-Washington Consensus has been proven statistically significant and robust, the region still remains among the world’s most unequal: 8 Gini points higher than Asia, 18 higher than Eastern Europe and 20 higher than the average developed nation.5 Governments typically redistribute relatively little through taxation and as a whole, government spending is rather neutral in its redistribution.

Significant shares of the distributional improvements were caused by benign external forces influencing demand for export commodities, influencing labor demand and initial shifts in the distribution of skills instated by access to education. Gasparini, Cruces and Tornarolli duly noted, “While there are signs of decreasing inequality in the region, these falls are still relatively small, and so far not clearly related to substantial policy changes nor to permanent modifications in the fundamentals.” In my opinion, and also of scholarly work I have encountered, current social and fiscal policy coupled with today’s economic reality in Latin America does not create an environment for sustainable falling income inequality. However, there are recommended areas of focus and aims for policy change that could promote sustainable shrinking of the income gap in Latin America.

Collection of personal income and wealth taxes are relatively low on world averages.5 Though the role of the income tax was re-implemented in the 2000s and many exemptions were withdrawn, fiscal policy in Latin America has yet to demonstrate progressive redistribution. Tax revenue/GDP rose 3.5 percentage points between 2003 and 2008 and barely dropped during the Great Recession, fiscal reform is necessary to promote further growth of the middle class in Latin America.4 Taxation and social expenditure should shape an income distribution with a lean welfare state that still avoids the high costs of the western model, but still promotes equality over the long term.4

As the middle class grows, governments must seek to squeeze what are now unnecessary middle class entitlements to boost revenue that can be spent not only on CCTs, but other beneficial social spending to continue the escalation of human capital and economic growth.1 However, governments must proceed with caution when reforming tax policy that affects this recently risen middle class; they must be reassured that government expenditure will be spent efficiently in similar programs and processes that alleviated poverty in the previous decades.

As of 2008, less than 20% of the retired Latin American population received pension income. Many do not receive pensions due to years working in informal employment sectors, but an overwhelming majority is due to lacking coverage by government programs.2 Those with pensions represent the “old” middle and upper classes, having occupied high paid, stable positions during their working years. The current system of pensions adversely affects women; the overwhelming majority of Latin American working-age females did not join the labor force until the 1980s. So for those without pensions, vulnerability of elderly poverty is high, particularly for women.

Many countries are beginning to debate non-contributory pensions to combat this issue, such as Argentina, Brazil, Bolivia and Chile.2 Not only will this alleviate the social ill of elderly poverty in the future, but it will necessarily reduce the burden of government spending on this group, especially as their need for public health care increases.9

A commodity price boom granted Latin America the highest period of sustained growth since the mid 20th century. However, this period was transient, and economies dependent on primary products are particularly vulnerable to macroeconomic shocks.  Inflation has also proven worrisome in the recent past for nations such as Argentina and Venezuela, which have shown double-digit inflation.8 In the short term, Birdsall, Lustig and McLeod argue that the inflation tax is ultimately regressive, undermining fiscal efforts to redistribute. In the long term, high inflation and too much domestic credit growth could cause currency appreciation and foreign capital flight.

Giovanni Cornia of the University of Florence Department of Economics explains his foreseen obstacles to overcoming the inherent structural biases of the Latin American economy; “the lack of an explicit industrial policy, low savings and the related dependence on foreign capitals, continued pressures towards a real appreciation and commodity dependence [all] threaten the possibility of shifting to an equitable and sustainable long-term growth path.”4

He worries that without changes in these areas, it is unlikely that the region will be able to tackle its structural inequality by diversifying the economy into new labor skills intensive sectors. Governments, although mostly leftward leaning and aligned with organized labor, must resist nominal wage hikes unless they are backed with productivity growth.4 Dependence on foreign capital is high and domestic savings very low. Now that more Latin Americans have disposable income, macroeconomic policy must begin to promote domestic savings and investment, reducing dependence on foreign credit and lending.

Conditional cash transfer programs, though clearly effective in reducing poverty, are overwhelmingly maternalistic in nature. Sociologist Maxine Molyneux made some valid connections, taking a feminist angle in critiquing social policy. She argues many CCTs, particularly Latin American ones, have negative consequences for women, forcing them to incur opportunity costs for engaging in paid work. Molyneux calls this the “feminization” of responsibility and obligation for managing poverty while she maintains the conditions of her family’s respective aid program.

“The Oportunidades program creates a dependency on a subsidy which confirms mothering as women’s primary social role, one which may enhance their social status and self-respect, but nonetheless, in doing little to secure sustainable livelihoods, puts them at risk of remaining in poverty for the rest of their lives.”6 She argues the heart of these policies should be economic regeneration of the entire family, not subsidizing “good motherhood.” In evolving social policy, Latin American governments must move away from the traditional models of male breadwinning, promoting women in paid work and equal shares of household management by both parents.10

Democracy has stabilized and consolidated in most of Latin America, the majority being left and left-of-center regimes. Intensification of progressive policies might face opposition from the new middle class; In Bolivia, Honduras and Argentina, interest groups have stalled several attempts at redistribution.4 Francis Fukuyama of Stanford sees a solution to this problem, “for a true middle-class democratic consensus to emerge, this group needs to constitute a clear majority of the population.”3 If not, they could ally with the rich and block reforms. What are the political implications of the growing middle class? Will they represent a new proletariat? Will they support statism?

Latin American governments must work to continue to grow the middle class through moderately progressive taxation tagged with efficient and “popular” social spending that new middle class citizens can back in full support of future growth.

Latin America’s shift in relative labor supply stemmed from education spending. Public primary and secondary schools have come far and higher education is expanding, but there is a large gap between the quality of public establishments and their private counterparts, the latter filled with students of upper-middle and upper class origin. Student loans are more common now than ever, but the burden and fear of student debt has many middle class high school graduates on the fence of pursuing higher education.3

Now that secondary education is almost universal, focus should be shifted to better these institutions and attempt to equalize them with private schools. Going beyond the high school level, supporting endeavors for higher education by creating lower interest student loan programs and improving tertiary education for those that are qualified and wish to seek it. Only through a more educated workforce can Latin America hope to advance its economies from primary and secondary pushing into tertiary sectors.

Finally, in order to continue the path toward more equitable societies, public spending in general must be continually aimed at alleviating poverty and improving general public services. Rural education and health care can still be improved where poverty is still plaguing generation after generation.5

The World Bank has calculated that over 50 million Latin Americans joined the middle class between 2003 and 2009.11 In a 2010 working paper, the OECD qualified just under half of Latin America to be middle class as defined by their standards.3 Income inequality in the region has fallen from a Gini coefficient of over .53 in 2002 to just below .50 in 2010.1 Though on the global scale Latin America has far to come in terms of equality, studying the decomposition in its recent fall in income inequality has important implications for policy strides to achieve socioeconomically just and socio-politically stable future growth.

2) Gasparini, Leonardo, and Guillermo Cruces. "Poverty and Inequality in Latin America: A Story of Two Decades." Journal of International Affairs 66.2 (2013): 51.

5) Gasparini, Leonardo, and Nora Lustig. "The rise and fall of income inequality in Latin America." The Oxford Handbook of Latin American Economics (2011): 691-714.

7) Stallings, Barbara, and Wilson Peres. Growth, employment, and equity: The impact of the economic reforms in Latin America and the Caribbean. Brookings Institution Press, 2010.