Family of 4 killed in crossfire of military shootout: The reality of Mexico's security problem 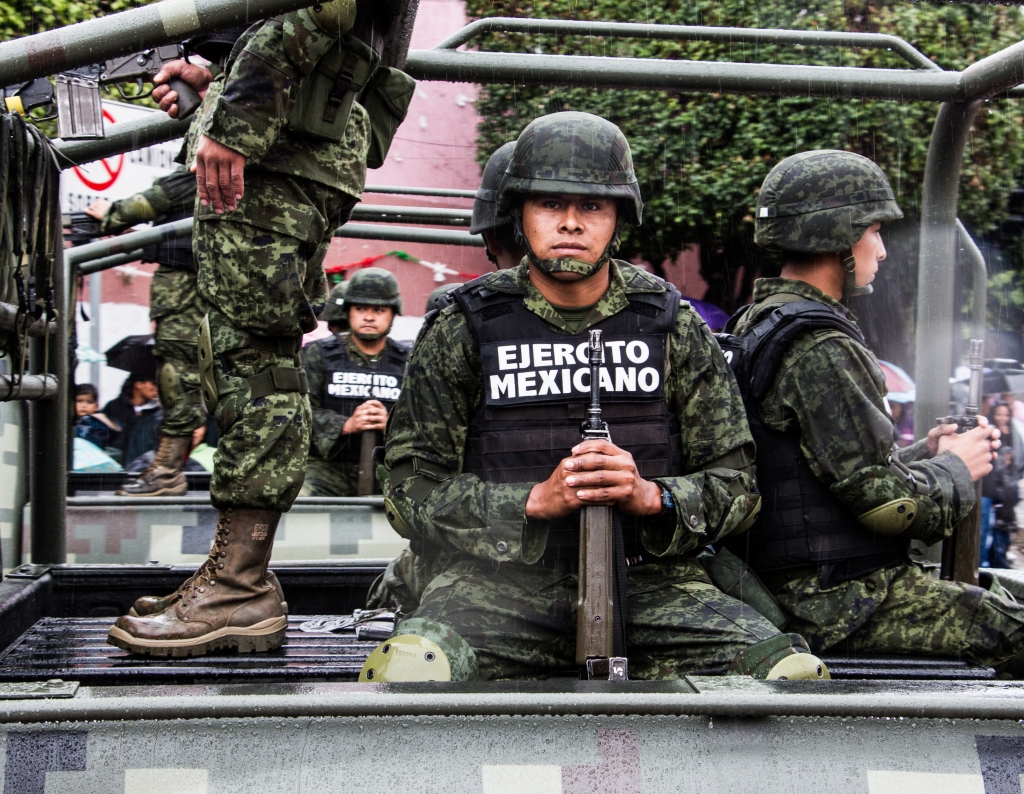 Just past 2 a.m. on Sunday, March 25, a family was caught in the crossfire of a shootout between gang members and Mexican marines in the border town of Nuevo Laredo, Mexico. In what has been described by the marines as a series of ambushes by the criminal group, a total of nine people were brutally killed, and 13 injured. Included in these numbers were a mother, father, and their two young daughters, aged 4 and 6 (Univision).

The Ruiz family was traveling home from the airport late at night after visiting family when they were caught in the middle of a brutal shootout between marine forces and drug cartel members. The mother, 28, and her two children, Kenia Azul Rojas Ruiz, 4, and Chelsea Abril Rojas Ruiz, 6, died almost instantly from bullet wounds. The father, Efrain Rojas Santos, 25, was severely wounded and was prevented from reaching the medical services that he needed to survive. The couple’s young niece, Leslie, 12, was injured from the gunfire but was able to emerge from the car and flag down the military helicopter to get medical attention (El Mañana).

The shootout that killed the Ruiz family was the final of three that occurred that same night. According to Marine reports, the altercations first began when people in moving cars began firing at members of the marine force, or SEMAR, who were patrolling.

A few hours later, when another group of marines was exiting the military base to provide medical aid to the first group that was attacked, they were ambushed themselves in a similar manner only 600 meters from the base, killing one marine and injuring 6 others (Univision). The third attack occurred in the same way when a third group of the armed forces was shot at by men in moving vehicles, presumed to be members of a drug cartel. In this final altercation, a military helicopter was sent to aid the marines in combating the criminals.

It was in this third attack that the Ruiz family found themselves caught in the crossfire of the deadly shootout. However, the specific details of how these civilians were killed, and who fired the shots, remains a point of contention between civilian eyewitnesses and the marines.

According to eyewitness accounts, the shots that took the lives of four members of the Ruiz family came not from the cartel members that reportedly started the confrontation, but from the Mexican military helicopter. The helicopter reportedly fired bullets and grenades at the family’s car, presumably confusing their car with that of the cartel members (El Pais). Upon realizing that civilians had been injured, the helicopter descended and landed in the street to provide aid—then blocking the path of the ambulance to the wounded father, making it impossible for him to get the medical attention needed in time (Univision). Other eyewitnesses claim that an ambulance was never actually called and that the marines directly denied the family medical attention. These claims have not been confirmed (El Mañana).

While the initial marine report detailed the deaths of their own, it did not make note of its role in the deaths of the family members—in fact, the initial report did not even mention any civilian injuries or deaths whatsoever. The Mexican Attorney General later made a statement confirming the deaths of the parents and children; however, this statement denied allegations that the marine helicopter was responsible for the civilian deaths, instead claiming that the shots that killed the family came from the members of the drug cartel. The Attorney General’s statement also asserted that the marines, upon realizing that civilians had been injured, took immediate action to provide them with the proper medical attention (El Pais).

This sort of violence—and this inconsistency between witness and military accounts—is not alien to northern Mexico. As a result of drug violence in Mexico and subsequent aggressive anti-drug military initiatives, the Mexican states along the border with the U.S. are especially prone to violence. Due to drug trafficking into the U.S., the Mexican cities along the border such as Ciudad Juarez and Tijuana are among those with the highest rates of violent crime in the world (Mexico News Daily).

Nuevo Laredo, where the Ruiz family was killed, is right along the Mexico-Texas border, in the center of the territory of the Zetas cartel—one of the largest in the country. Therefore, the geography of the city alone makes it particularly vulnerable to violent crime related to gangs and drug trafficking.

In 2006, then-President of Mexico Felipe Calderón, with the support of the U.S., began sending military troops into violent regions in support of the ‘War on Drugs’. When Enrique Peña Nieto took office in 2012, he expanded this military initiative. The military operated in six of Mexico’s 32 states when Peña Nieto took office five years ago; it now operates in 27 (New York Times).

However, it appears that the use of military force has only served to exacerbate the problem rather than resolve it. By ordering soldiers into more states, Peña Nieto has only helped gangs to fragment and expand into other states, further spreading their influence and overwhelming local authorities. Rather than combat the violence provoked by cartel activity, this military action has actually added to the violence, making the past few years some of the most violent in Mexico’s modern history.

In 2017, Mexico recorded over 29,000 homicides, giving it one of the highest rates of violent crime in the world (NPR). Since Calderón began his anti-drug military initiative in 2006, over 200,000 people have been killed and 31,000 gone missing as a result of the drug war (New York Times). And it appears that violence, human rights violations, and lack of accountability by the military itself has only contributed to these numbers.

Given this systemic lack of accountability by Mexico’s military forces—and the marine’s unwillingness to accept blame for the way that the family of four was killed last week—a future of justice for the Ruiz family appears grim. More often than not, the word of the military is taken as gospel in spite of any contradicting eyewitness accounts, making it dangerously easy for officers to commit human rights abuses without punishment.

In late 2017, President Peña Nieto’s government passed the Interior Security Law, further expanding the role of Mexico’s armed forces in the fight against violent crime. This new law (of questionable legality) has been met with widespread criticism, with citizens arguing that the military’s presence only worsens the country’s violence and puts innocent civilians in greater danger than before (Al Jazeera).

Rather than expanding the military’s role into a seemingly endless war against the increasingly powerful cartels, critics argue that the country’s violent cities need a long-term solution to the security problem. They claim that the evidence of the past 11 years is proof enough that the military strategy does not reduce violence, but increases human rights violations and makes it more difficult to hold military officers accountable for their actions.

The issue of gang violence—and the failure of the military to solve the security problem—has not been kind to Peña Nieto’s approval ratings and is likely to come into play this July when Mexicans head to the polls to elect their next president. And, considering recent opinion polls, it appears unlikely that the people elect a leader from the same party with the same strong-headed stance against the drug trade. One can only hope that the next president has a legitimate long-term security plan to reduce the military presence throughout the country, to combat drug violence, and to keep innocent Mexican civilians safe.