By Javier Vázquez-D'Elía and Erin Barton 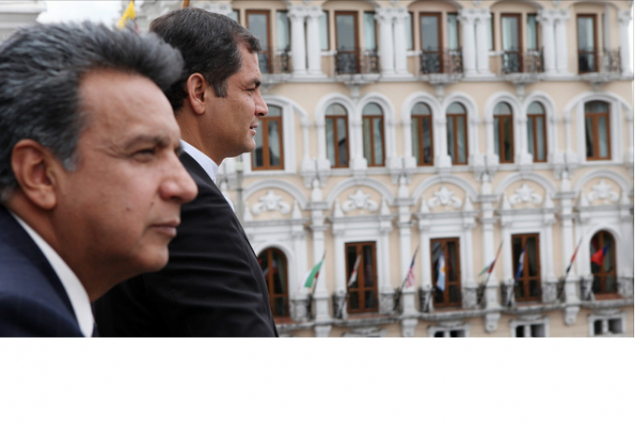 Lenin Moreno’s inauguration as President of Ecuador took place at the national assembly, through a ceremony through an important extent marked by the salience of exiting president Rafael Correa’s participation. After a pause while Correa abandoned the building in the middle of farewell honors, the new president delivered a speech that repeatedly emphasized the need for respect, tolerance, and dialogue. “I am everybody’s president, I owe everyone, I respect everyone,” he said. The big question, that will remain open for a while, is about Moreno’s estimation of the balance between what he owes to everybody and his debt with his predecessor.

Charismatic political leaders tend not be particularly good at picking successor. Throughout Latin American history, the task has proved especially challenging for incumbents cultivating certain leadership styles. Things are usually more complicated for those having ruled based on some combination of concentration of power, personalization of the exercise of authority, regular mobilization of public opinion through a style of permanent confrontation with opposition forces, and no marked aversion for institutional manipulation. Of course, the concrete type of political risk entailed by these decisions vary from case to case, depending on the specific political circumstances and the goals pursued by the decider, but the ambiguity of scenarios is considerable regardless of the hypothesis entertained. For the sake of illustration, let us consider some possibilities. If the successor is supposed to “keep the chair warm,” providing an interregnum without surprises between two non-consecutive tenures of the respective mentor, the temptation of an independent accumulation of political capital by the former becomes the main concern for the latter. An opaque character seems to be the wise choice. However, apart from the unavoidable risk of mistaking discretion for opaqueness, there is the possibility of dovetailing opaqueness and sheer incompetence. In this case, the amount of damage resulting from incompetence is crucial: moderate deterioration of the general situation of the republic may result in a favorable scenario for a comeback as a savior. However, deterioration may present enough of a challenge to end devouring the political capital of the returning leader –especially if it affects the economy.

Things are different if the godfather’s main goal is the consolidation of a legacy through a “routinization of charisma” leading to progressive institutionalization. Once again, we have in first place the threat of a dauphin willing to make a distinctive contribution, thus prolonging the legacy but also modifying it –perhaps too freely for the taste of her predecessor. But let us accept a demanding assumption, and imagine a successor that is both competent and loyal, lacking any interest in posterity. This type of enterprise would be unlikely to go too far without a more inclusive political game and a more consensual ruling style, which in turn entails building trust between government and opposition –goals impossible to achieve without political costs for the exiting president. On the one hand, earning a favorable disposition from previously excluded actors would be contingent on the evaporation of any suspicion of the godfather remaining a power behind the throne. On the other hand, a credible opening to more inclusiveness, political bargaining and negotiation would require acceptance of the quintessential uncertainties of any fully democratic game –and of the resulting possibility of changes in policies and institutions. In other word, any effective consolidation of the legacy through solid institutionalization demands the price of some degree of watering-down. Even counting on a former president willing to pay that price, a similar disposition is not necessarily to be expected from the main beneficiaries of his legacy –actually, one should expected to be very unlikely with a legacy generating intense polarization.

It is obviously too soon to tell whether the Ecuadorian conjuncture fits any of the hypothetical scenarios sketched here –and even sooner to predict an eventual outcome. So far, we know that, statements of intentions aside, Moreno became president with barely 51,6% of the vote, after an election whose transparency was severely questioned by opposition candidate Guillermo Lasso. Regardless of the accuracy of the verdict that validated the result in spite of accusations of fraud, the episode clearly reinforced the political fracture among Ecuadoreans. The new president, supported by a very narrow legislative majority, takes off with a severely diminished legitimacy.

Moreno clearly meant to send a strong signal of rupture in terms of presidential style with the discontinuation of the weekly shows implemented under Correa to defend the presidential performance. “We will find another way of keeping the citizenry informed about governmental actions. I prefer those European systems, where the president remains unnoticed,” he added. An important part of his speech focused on the delicate economic situation, including promises of fiscal austerity and a commitment to the dollarization of the Ecuadorian economy. Toda una vida, an ambitious project to provide comprehensive healthcare, also received special attention –but provided no specifics about projected sources of funding. Also discontinued was Plan Familia, a controversial family planning initiative launched by the previous administration. Moreno also remarked his commitment to fight corruption –a promise that met the skepticism of the opposition, given the accusations of dishonest management of Petroecuador, the state-owned oil company, pending on vice-president Jorge Glas. The composition of the presidential cabinet can also be read as sending signals of a consensual approach to relations with opposition parties and social forces. In spite of retaining 8 of the 32 members of Correa’s cabinet, Moreno placed Ivan Espinel, a former competitor for the presidency, in charge of anti-corruption initiatives, and mixed technocrats and representatives of social forces among the 23 ministers and 12 secretaries he appointed.