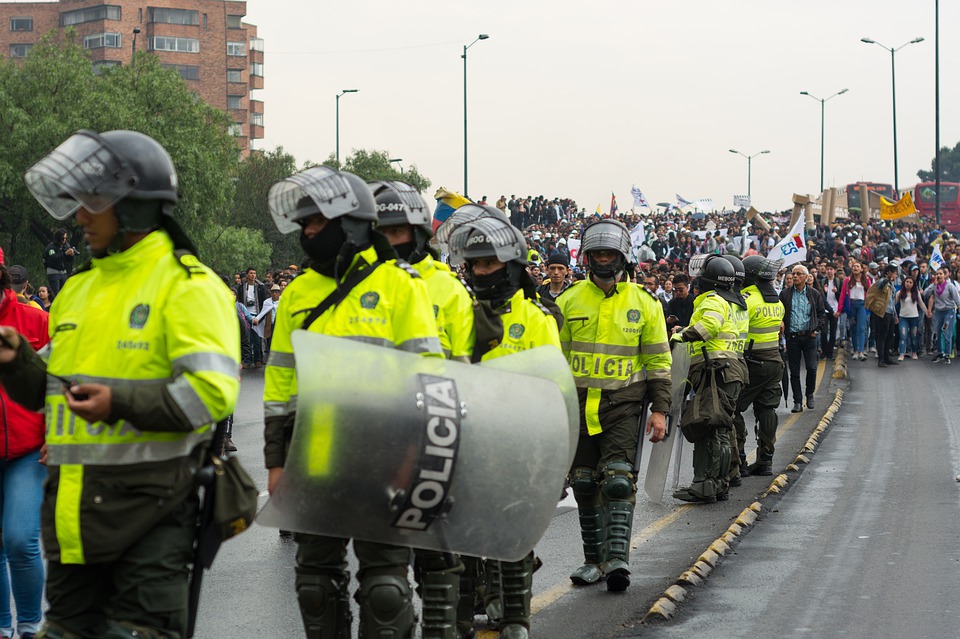 Colombia’s President Iván Duque has been involved in a fair share of controversy since before his election late in 2018. Prior to his election, his strong opposition to the articles in the 2016 FARC-Colombia peace deal, overseen by his predecessor, Juan Manuel Santos, illustrated to the international community Duque’s hard-line political views. A few years later, a polarized slight majority of Colombians felt that Duque’s unwavering conservative values would be the best for the Colombian people, winning him the seat of the presidency. In late fall of 2019, those same voters either changed their minds about Duque’s efficacy and intentions as President or stayed silent while Duque’s critics took to the streets in protests over whispers of potential labor reforms and pension cuts from the Presidential palace. What began in October with labor unions protesting Duque’s potential reforms turned into one of the largest and longest protests Colombia has experienced in decades as University students called for a strike to protest corruption and cuts in public education. Since the prior few months to the protest, there has been a significant increase in violence against indigenous leaders and activists, which some blame on Duque’s slowing of the 2016 peace deal. Colombians of all backgrounds joined the labor unions and students adding concerns about the poor healthcare system, inadequate pensions, violence, inequality, corruption, and other issues to their list of complaints. Arlene Tickner, a political scientist at Bogota's Rosario University, explained to Al Jazeera that “social protest in Colombia is not as customary as in other Latin American countries and this has been like a slow cooker waiting to explode for some time,” (Grattan, 2019). As Latin America has been experiencing waves of unrest, protests largely led by everyday people, and transitioning administrations, political tensions are high in the Western Hemisphere.

While the Colombian protests undeniably show a common motivation and unification on that Colombians can achieve, the protests are largely unorganized, lacking any real leadership. The protesters’ demands are many without detailed proposals for solutions. A majority of protesters want radical reform to the 2016 Peace Deal for a stronger implementation of the articles addressed in the deal or Duque’s resignation. In addition to the chaos of the protests, Duque’s administration handled the matter rather poorly. To start, he denied any preparation of the rumored bill that angered labor unions and claimed that the organizers of the protest were involved with international radical leftists. The night before the first scheduled protests in Colombia, police searched the offices of “dozens of alternative media outlets and art collectives,” though it is unclear exactly what they were searching for. The public saw these actions as a form of media censorship, and even more, Colombians showed up to the scheduled rally. Police violence in the protests has also been a unifying cause for the Colombian protests as a student protester was killed by a police officer and others were beaten and left for dead in the street, according to the testimonies of other students (Botero & Otero Bahamón, 2019 ). To cope with the protests and strikes, Duque offered to hold a national dialogue, but to many, this was taken as an empty promise.

The first meetings between Duque’s administration and representatives of the protests were unsuccessful in quelling the demonstrations, though more meetings were organized, none were enough to quell the dissatisfaction of Colombians. Representatives of the protesters demanded that Duque’s administration “fully meet its obligations under the terms of the peace process signed with the left-wing rebels of the Farc in 2016 and that it does more to prevent the killings of social activists and former rebels” (BBC Latin American & Caribbean, 2019). Although Duque denies the existence of certain potential legislation, the representatives also require that there will be no raise to the pension age and that the minimum wage will not be cut. Another demand is the dismantling of the Colombian riot force, who are responsible for the death of the University student protester (BBC Latin American & Caribbean, 2019). Even if Duque were to try to meet the many demands of the Colombian people, the logistics are rather complicated.

Sergio Guzman, director of the Colombia Risk Analysis, explained that a lot of the peoples’ demands go against Duque’s party’s beliefs. By trying to meet the protesters' demands, there is the potential that by severing party ideals, there would be even more divisions between the right and left. Among the most challenging demands for Duque to address without offending party members are the few listed above, certainly not a good sign for these activists.

The protests grew extreme, as one action by either side of the conflict retaliated in an escalating manner continuously. Protesters, angered by Duque’s administration held peaceful rallies to voice their oppositions. In turn, Duque denied the perceived threat of said protesters and used police force to monitor and spy on media outlets, which led activists to feel threatened by media censorship. Attempts to control the public have backfired, whether or not these attempts were genuinely aimed to initiate a dialogue or if they were to suffocate the spark of unrest. Duque initiated a curfew, which Colombians defied in the thousands. The cycle of opposition is adding to already growing unrest in the country; however, the power of the Colombian peoples’ unity cannot be underestimated. Then again, neither can the current administration’s stubbornness. Although the suffering of the protesters grows, Tickner believes that “until some form of meaningful political, economic and social reform is enacted, the peace process is advanced more forcefully, and Duque takes popular demands more seriously, social protest will continue” (Grattin, 2019).