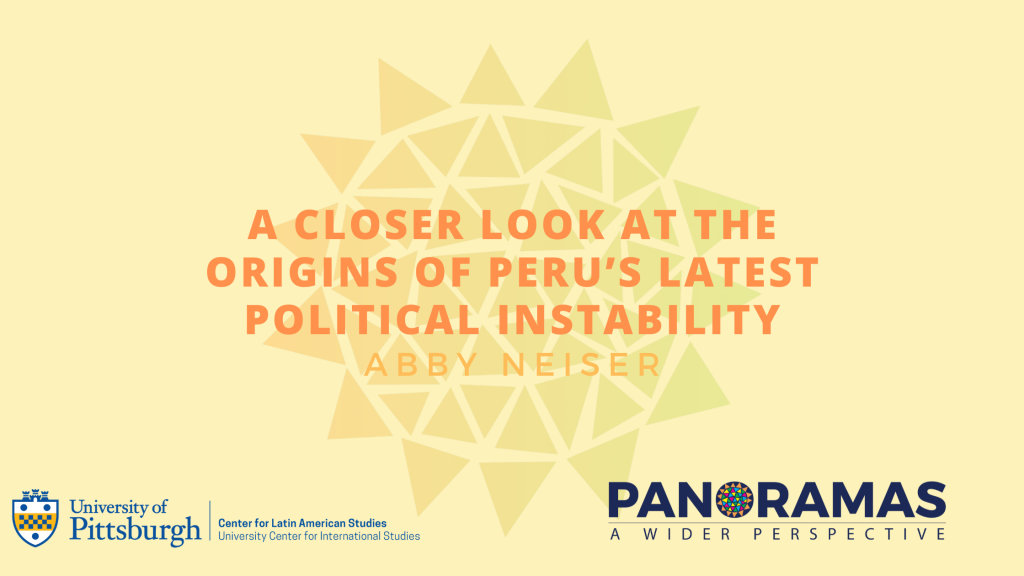 Last November, over the course of less than a week, Peru went through three different presidents.  The first, Martín Vizcarra, was impeached and removed over allegations of corruption (Dube, 2020).  Vizcarra was accused of taking $630,000 in bribes from construction companies during his time as governor of Moquegua (Goldenberg, 2021; The Associated Press, 2020).  As of now, the only evidence for these allegations is two individual testimonies, a far cry from a thorough investigation (Angelo, 2020).  Following Vizcarra’s removal, legislator Manuel Merino was appointed the new president (The Associated Press, 2020).  Interesting, Merino himself has been accused of improperly using state funds to help his family (The Associated Press, 2020).  The choice of Merino as Vizcarra’s predecessor was extremely unpopular and provoked large protests (Dube, 2020).  These protests resulted the use of rubber bullets and tear gas as well as the deaths of two protesters (Angelo, 2020).  People took to the streets in part because Vizcarra was remarkably popular, especially given how little Peruvians tend to trust politicians.  Approval polls regularly showed over half the population supporting him, and that number even skyrocketed to over 90 percent during the height of the COVID-19 pandemic (Angelo, 2020).  Just days after Vizcarra’s removal, Francisco Sagasti, another lawmaker was installed as Merino’s successor (Rebaza, 2020).  Sagasti’s appointment has calmed the storm for now, though ongoing elections could change this.  Nonetheless, November’s events are a symptom of underlying problems in Peru’s democracy, and addressing these root causes is the only way to create true stability and accurate representation.

Corruption is endemic in Peruvian politics.  All living former presidents have either been investigated or charged for corruption (The Associated Press, 2020).  According to Transparency International, widely considered to be the gold standard for measuring corruption, Peru ranks 101 out of 198 countries for corruption, in which the number one spot on the list is the least corrupt country (Rebaza, 2020).  68 out of 130 lawmakers—over half of the legislature—are under investigation for criminal charges, many of which are corruption charges (Goldenberg, 2021).  But why are so many Peruvian politicians corrupt?  One main reason is parliamentary immunity.  While holding office, lawmakers are, by and large, shielded from standing trial and being punished (The Associated Press, 2020).  Though getting an exemption from this is technically possible, between 2006 and 2019, only six out of forty requests to the Supreme Court to make an exception to this rule were granted (The Associated Press, 2020).

All of this information about corruption and parliamentary immunity boils down to two critical implications.  First, so long as someone stays in office, they will not—with few exceptions—be punished for any crimes they committed.  Second, if someone has a pending investigation, they can buy themselves time from facing the consequences of it by running for office, thereby incentivizing criminals to run for office (The Associated Press, 2020).  This combination is toxic to the health of Peruvian democracy.  Interestingly, one of the last actions Vizcarra took as president was to try to end parliamentary immunity (The Associated Press, 2020).

Democracies with just as much, if not more corruption than Peru do not always experience the same sorts of crises, indicating that this is only one piece of the puzzle.  Another problem plaguing the Peruvian political system is the lack of strong political parties.  Experts consider parties to be a fundamental part of functioning democracy.  New York University political scientist Adam Przeworski even goes as far as to define democracy as “systems where parties lose elections” (Navia, 2020).  Parties help both politicians and voters by streamlining resources and information, and without well-functioning parties, accountability and organization become difficult (Navia, 2020).  Peru used to have a strong party system until the 1980s, when economic turmoil and the rise of Shining Path, a Maoist terrorist organization, contributed to its breakdown, which culminated in the election of Alberto Fujimori (Dube, 2020).  Since then, the situation has only gotten worse.  Every victorious presidential candidate since 2001 has come from a party that was either nonexistent or a fringe party up until that election (Navia, 2020).  No party in the Peruvian Congress holds so much as 20 percent of the seats in the legislature (Albertus, 2020).  Because there are so many parties that form and disintegrate so rapidly, deciphering what each party actually stands for is next to impossible (Dube, 2020).  The importance of strong parties for political stability is evident throughout Latin America.  Brazil and Venezuela, for example, both have similarly weak party systems and have also suffered political turmoil, while Uruguay has experienced a remarkable degree of stability in part because of its strong party system (Dube, 2020).

The final issue at hand is the need for constitutional reform.  The current Peruvian constitution was adopted in 1993 under Alberto Fujimori, an autocrat (Albertus, 2020).  This is analogous to issues raised recently with the Chilean constitution, which was written during the reign of Augusto Pinochet (Albertus, 2020).  As a result, the constitution is wrought with antidemocratic components.  Among these problems are the lack of an independent judiciary, not being able to hold the legislature accountable, and a lack of representation for Indigenous groups (Albertus, 2020).  Further, Article 113, which was used to impeach Vizcarra, is seen by many as problematic because it sets a low bar for what is an impeachable offense (Angelo, 2020).  As a result, many of the protesters in November were calling for a new constitution (Reuters, 2020).

Peru’s latest political instability is the culmination of the perfect storm of flawed political institutions.  Deep, structural change will need to be made to permanently fix these problems.  First, the parliamentary immunity rules either need to be overhauled or removed entirely to stop Congress from being a safe haven for avoiding criminal prosecution.  Second, active efforts must be made to strengthen the party system.  This could be done through a combination of different reforms, such as changing the way that representatives are elected or creating barriers for forming new parties.  Peru, like most other multiparty systems, has a proportional representation system, meaning that the number of seats in a voting district is allocated to parties and candidates according to the percentage of the vote they get.  One measure that could decrease the number of parties and increase the strength the remaining parties would be to increase the threshold needed to earn representation.  If parties and candidates needed to reach a certain threshold of votes, this would decrease the incentive to vote for smaller “fringe” parties for fear of “wasting” a vote.  Such a policy could create power in numbers and encourage politicians with similar interests to band together under one party to get the largest vote share possible so that they can be guaranteed representation.  Implementing a vote threshold could also increase ideological coherence and discernability among parties.  All of the aforementioned changes could be in enshrined in a new constitution, which should additionally seek to strengthen the judiciary and ensure representation to the Indigenous population.  These reforms combined could help to establish institutions that facilitate democratic stability.

Addressing Peru’s political problems structurally is an urgent issue.  Beyond good institutions, political stability requires faith in the system, and Peru is suffering from a crisis in confidence.  Less than half of the country supports democracy, and less than a tenth of the country approves of Congress (Azpuru, 2021; Dube, 2020).  The president that most Peruvians supported was impeached and removed on a weak accusation of a crime for which most legislators are under investigation, likely decreasing faith and confidence in the political system even more.  Beyond that, Peruvians need a political system that works for them.  Peru is one of the Latin American countries hardest hit by COVID-19, largely due to infrastructure issues (Angelo, 2020).  The International Monetary Fund expects that Peruvian economy will contract by 14 percent in 2020, and economic relief and recovery will be critical (Dube, 2020).  The problems Peruvians face require a competent government that can be held accountable, and swift action must be taken to make this happen.

Navia, P. (2020, November 16). Peru’s Problem Is Bigger Than Not Having a President. Americas Quarterly. https://americasquarterly.org/article/perus-problem-is-bigger-than-not-h...