The Case of Vanessa Guillén: Military Crimes in the United States 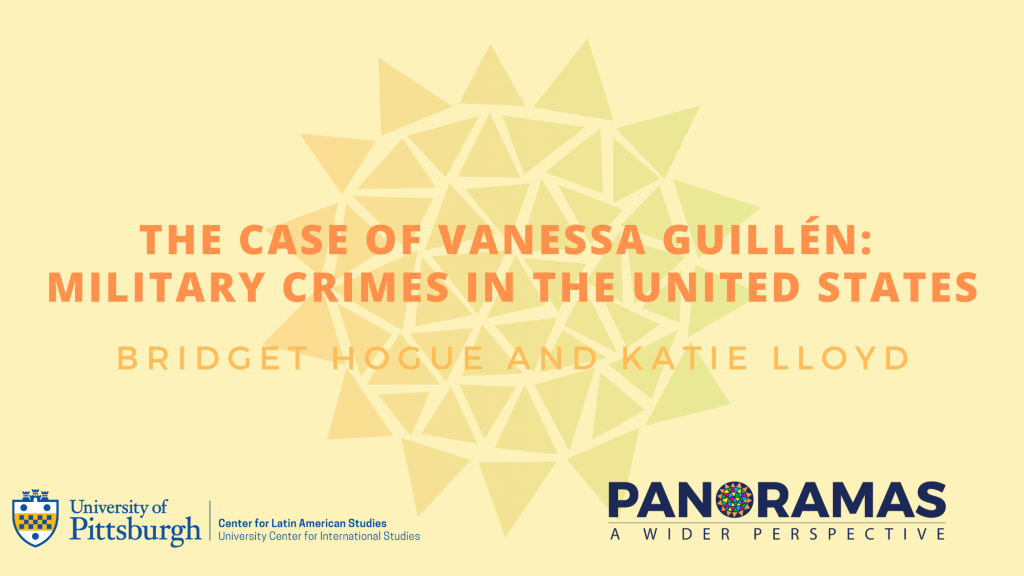 By Bridget Hogue and Katie Lloyd

Vanessa Guillén enlisted in the U.S. Army shortly after graduating high school, fulfilling a dream that she had since childhood (Carrega & Martinez, 2020). Vanessa enjoyed lifting weights, playing soccer, and listening to Bad Bunny (Diaz et al, 2020 & ABC 11, 2020) Originally from Houston, Texas, she would become a small arms repair soldier and be posted at Fort Hood, the largest active duty armored military base in the United States (Yang et al, 2020 & Carrega & Martinez, 2020 & U.S. Department of Defense, n.d). It was from here that Guillén would disappear.

She was first noticed as missing the evening of April 22, 2020 by her regiment (Carrega & Martinez, 2020). The first action they took was to call her family to ask if they had heard from her. The next day, when Vanessa was not found in her barracks and all attempts to contact her failed, she was officially reported as a missing person and an investigation was opened (U.S. Army, n.d.).

Human remains were found on June 30, 2020, 68 days after she was reported missing, and they were identified as Vanessa Guillén on July 6th (U.S. Army, n.d.). The 20-year-old was last seen alive in the parking lot of her barracks on April 22nd around 1p.m. Aaron Robinson, who Vanessa’s family states sexually harassed Vanessa, allegedly struck her in the head multiple times with a hammer in the armor room (Jones & Sanchez, 2020). Robinson then placed her body into a large box and was witnessed wheeling it out to his car. He called his girlfriend, Cecily Aguilar — an estranged wife of another Fort Hood soldier, — who met Robinson to dismember the body and attempt to burn it. When this was not successful, they placed her body into concrete and buried it (Patton, 2020).

Within the three months of Vanessa’s disappearance and the discovery of her remains, a lot of information, and lack thereof, came to light. Celebrities, like Salma Hayek and Houston rapper Baby Bash, used their social media to help raise awareness. Baby Bash even pledged five thousand dollars for information leading to her discovery. The Guillén Family spoke to the press multiple times, expressing frustration at the investigators for not giving the family any updates or concrete answers (ABC 11, 2020). They were finally updated, along with Texas Representatives, on June 23rd (Carrega & Martinez, 2020).

Robinson, her alleged killer, was interviewed by investigators six days after her disappearance. Aguilar was interviewed twice on June 19th, where she lied to investigators, and June 30th, where she admitted to assisting Robinson in the disposal of Vanessa’s body (Carrega & Martinez, 2020). That same day, Robinson fled the base and died the next morning by suicide after being confronted by police officers and federal marshals (Cruz et al, 2020). Aguilar is charged with felony alteration and mutilation to impede an investigation. She faces twenty years in prison and a fine of $250,000 (ABC 13, 2021).

Vanessa Guillén’s family might not get their questions answered. Whether she was murdered because she knew about Robinson’s relationship with Aguilar or because she was going to report him for sexual harassment will never be known (Carrega & Martinez, 2020 & Cruz et al, 2020). Because of his death, Robinson will never face trial. Aguilar and her lawyers are hoping to get her confession thrown out, claiming that her Miranda rights were not read to her (ABC 13, 2021). An investigation into the leadership at Fort Hood and how they handled her sexual harassment claims, disappearance, and death lead by Army General John Murray resulted in the firing or suspension of fourteen Fort Hood Army officials for major flaws in their leadership (Diaz et al, 2020).

Sexual assault or violence are crimes that often go unreported. According to Vanessa’s sister, Vanessa was sexually assaulted during her time at Fort Hood but did not want to report the incident out of fear of repercussions (Mulcahy & Platoff, 2020). In the United States, nearly 1 in 5 women and 1 in 71 men have been raped at some point in their lives (National Sexual Violence Resource Center, 2021). Victims are more commonly assaulted by close friends or acquaintances than by a stranger. Following a sexual assault, mental health issues such as posttraumatic stress disorder, depression, anxiety and social phobias are commonly experienced. Survivors are also reported to often develop alcohol or substance abuse disorders, suicidal behaviors, and self-harming behaviors (Psychological Health Center of Excellence, 2021). Mental health likely suffers as a result of these crimes because of low reporting and the fear of unpacking such vulnerable experiences with others.

However, victims of sexual assault represent something much greater than mere statistics. Many claim that their experience was a result of command culture, which refers to how military officers are educated, and the style of training enforced on military bases. In the book Command Culture, author Jörg Muth highlights the irony of the United States supposedly being the most democratic country in the world, yet its officers receive an outdated military education which limits both creativity and initiative in their line of duty (Texas A&M University Press, 2018). Martha McSally, a former U.S. Senator who served in the Air Force, told her story of military rape several years after the fact. She was pursued and raped by a superior, and she explained her sentiments of wanting to leave her vocational calling because of the assault. “I almost separated from the Air Force at 18 years over my despair. Like many victims, I felt the system was raping me all over again” (Torres, 2020). McSally’s story is one instance of what has happened to so many women, some of whom cannot be named survivors today.

Between 2014 and 2019, an average of 129 felonies were committed annually at Fort Hood, including murder, kidnapping, and sexual assault (Mulcahy & Platoff, 2020). Following Vanessa’s death, the investigation which led to the firing or suspension of 14 U.S. Army officials was not the only action made at the Fort Hood base. The Secretary of the Army Ryan D. McCarthy ordered another investigation into the resourcing, policies, and procedures of the 6th Military Police Group—the division of the Criminal Investigation Command responsible for conducting felony-level criminal charges at Fort Hood (Mulcahy & Platoff, 2020). Both investigations led to the creation of the People First Task Force: a new group established to investigate problems discovered at Fort Hood and reevaluate the Army policy. Further, a new policy on missing soldiers’ pledges to take immediate action to find missing persons. Secretary McCarthy claims that the investigation and reforms will bring productive change throughout the U.S. Army (Mulcahy & Platoff, 2020).

In addition to sexual assault in the military, it is important to consider how Hispanic women are treated and perceived in the United States when discussing the case of Vanessa Guillén. On average, Hispanic women in the U.S. earn the least when compared to other races and male counterparts. Specifically, the full-time median weekly earning for Hispanic women in 2020 was $706—lower than Hispanic men as well as Asian, White, and Black men and women (U.S. Bureau of Labor Statistics, 2020). This number is a result of Hispanic women facing both gender discrimination and ethnic or racial discrimination within the U.S. labor market. Research has also found that the wage gap for Hispanic women is greater than the “aggregation of the absolute ethnic and gender effects” (Bahn & McGrew, 2019). In other words, the intersectionality of being a Hispanic woman opens more opportunities for discrimination that the baseline levels which stem from solely gender and ethnicity. There are also many structural barriers in the U.S. for working Hispanic women. They are subjugated to lower paying occupations and must grapple with disparities in the access to education and skills training (Bahn & McGrew, 2019). Keeping Hispanic women at the bottom of U.S earnings not only creates worse outcomes for the family but allows the U.S. economy to lose out on overall profits as well (Bahn & McGrew, 2019). The lack of justice for Vanessa’s murder is representative of how Latina women and many racial and ethnic minorities are treated in the U.S.

Media often portrays white women as the only victims of sexual assault, despite the fact that individuals of all races and ethnicities face the equal possibility of being sexually assaulted. White feminism has sidelined other communities from crimes which predominantly target women and gender minorities of all backgrounds. Women of color are often mistakenly portrayed as incapable of feeling pain, or undeserving of the same respect given to white women. What does it signify that the case of Vanessa Guillén was amplified to a national level? How might have the stereotypes of Latina women affected her experience at Fort Hood?

The violent death of Vanessa Guillén may have acted as the tipping point for what thousands of sexual assault victims have experienced. It remains unclear whether a new task force and policy change at Fort Hood will be enough to prevent a similar tragedy in the future. Widespread reform throughout all branches of the U.S. military could alter the command culture and lead to less instances of sexual violence. Military officers who perpetrate sexual assault, harassment, and violence should be held accountable and recognized as criminals. The civilian population must also work to hold the military accountable for all crimes to ensure the safety of all Americans, no matter their ethnicity, race, or gender. Those like Vanessa with a life-long passion for serving their country should never experience such terrible violence but should at least see justice served.