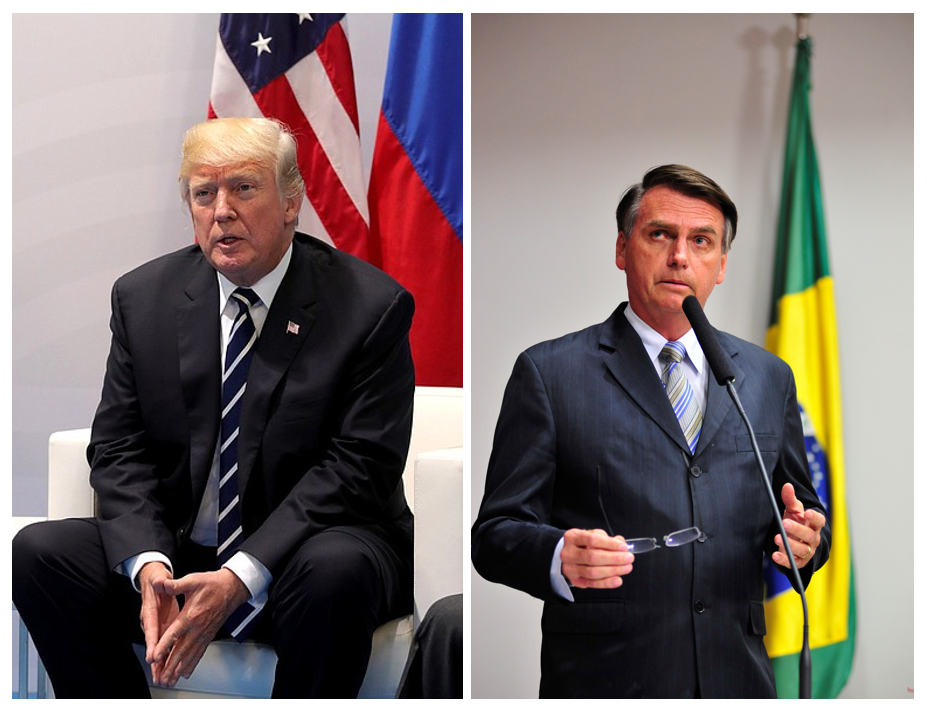 On Tuesday, March 19, President Donald Trump met his match as his Brazilian counterpart, recently-elected Jair Bolsonaro, arrived for a meeting at the White House to conclude his highly-anticipated trip to the United States. In this meeting, regarded as a ‘historic opportunity’ by U.S. National Security Advisor John Bolton, the two populists discussed critical foreign policy issues including trade, military alliances, new satellite operations, and the crisis in Venezuela. After their private meeting, the presidents disclosed some of the details of their discussion and shared praise for one another and their newfound diplomatic relationship.

Since Bolsonaro’s rise to prominence in his campaign and subsequent election in October 2018, he has oft been compared to Donald Trump due to various similarities in policy, style, and personality traits. Bolsonaro, often referred to as the ‘Trump of the Tropics,’ exhibits similar tendencies of tweeting at all hours of the night, branding all negative media coverage as ‘fake news,’ and making controversial statements regarding marginalized groups. Bolsonaro has been harshly criticized for his distasteful rhetoric towards Brazil’s LGBTQ+ community, misogynistic comments towards women, and his encouragement of extrajudicial killing by the police. Throughout his campaign, he praised Trump for his unique approach to leadership and renunciation of the notion of political correctness. Trump has shown appreciation for this praise, and has expressed his admiration of Bolsonaro in return.

Jair Bolsonaro’s visit to the White House was highly anticipated by leaders in both countries, as it signifies a strengthening of ties between the two largest economies in the Americas. As Brazil has been one of the U.S.’s key allies in its deliverance of humanitarian aid to Venezuela, this meeting was expected to provide some clarity as to the next steps in a potential joint military strategy. Trump and Bolsonaro are two of Venezuelan President Maduro’s largest ideological opponents, and they were among the first leaders to declare their support for opposition leader Juan Guaidó in January.

Bolsonaro’s visit to the U.S., his first official trip to another country since his inauguration, began on Sunday, March 17 with a dinner shared between various authorities and ‘opinion formers’ in the Brazilian ambassador’s residence in Washington. Former Trump strategist Steve Bannon was in attendance at this dinner, along with Olavo de Carvalho and other far-right ideologues. On Monday, President Bolsonaro attended different economic forums to discuss the future of Brazil-U.S. economic relations. Finally, on Tuesday, Bolsonaro held a private meeting with Donald Trump in the Oval Office, which was followed by a larger lunch and meeting, and a tour of the White House’s Rose Garden (La Tercera).

By the end of Bolsonaro’s visit, both leaders appeared pleased as they boasted a newfound relationship and several economic and political alliances. One of the most significant developments from the meeting was Trump’s decision to designate Brazil as a Major Non-NATO Ally, a title afforded to other key military allies including Israel, South Korea, and Japan (White House). This new alliance indicates a closer military relationship with Brazil, which could cultivate future defense contracts, cooperation in intelligence sharing, and the facilitated exchange of military technology.

Another highly anticipated outcome was the signing of a Technology Safeguards Agreement that would allow U.S. companies to conduct commercial space launches out of a base in northeast Brazil (WH). Many companies have expressed interest in such a deal, since it would reduce fuel costs associated with satellite launches (Americas Quarterly). Trump and Bolsonaro also orchestrated a deal between their respective space agencies (NASA and the Brazilian Space Agency) to jointly develop a satellite and launch it from this base in the future.

The two leaders also coordinated various trade deals, including a plan to create a ‘Prosperity Partnership’ which would reduce barriers to trade and investment between the two countries. They announced the intention to facilitate the trade of wheat from the U.S. at a zero tariff rate, and to resume the import of beef from Brazil (WH). Bolsonaro also announced that he would exempt U.S. citizens from tourist visa requirements in a bid to push the U.S. to loosen similar visa requirements for Brazilian tourists. In exchange, Trump agreed to enable Brazil to participate in the Trusted Traveler Global Entry Program, managed by the Department of Homeland Security (WH).

Another critical issue discussed during this visit, as expected, was the ongoing political crisis in Venezuela. To date, the U.S. has issued harsh sanctions on Venezuela in an attempt to pressure President Maduro to step down, and Trump administration leaders have expressed a keen interest in military intervention. Brazilian officials, on the other hand, have been much more hesitant to jump to military action, as they have expressed the desire to encourage a peaceful transition of power in Venezuela (La Tercera). Though Bolsonaro himself has been extremely critical of Maduro in recent months, his top foreign policy advisors have maintained their position against military action (AQ). However, if any decision was reached between Bolsonaro and Trump regarding Venezuela, it has not been announced to the public; according to a joint statement from both leaders issued by the White House, they maintain their alliance with Venezuela’s self-declared Interim President Juan Guaidó (WH).

The newfound alliance between the United States and Brazil, undeniably expedited by the similar leadership styles of Trump and Bolsonaro, marks a shift in foreign policy between the two nations. Past leaders in Brazil have been rather skeptical of establishing a strong relationship with the United States, in part due to historically controversial U.S. foreign policy objectives in the region. The last Brazilian president to visit the U.S. was Dilma Rousseff in 2015; however, this meeting was not quite as cordial as that between Bolsonaro and Donald Trump, as it came just two years after Rousseff had cancelled a similar trip to the U.S. after it was revealed that the NSA had been spying on her (The Guardian).

While many countries in Latin America are adopting more hostile stances towards the U.S., and as Chinese President Xi Jinping continues to expand his own influence over the region, the new friendship between Bolsonaro and Trump is an interesting development. As tensions between the U.S. and China continue to escalate in an ongoing trade war, each country’s decision to form alliances with one hegemon versus the other is a precarious and strategic one.

This is particularly true for the case of Brazil. China happens to be Brazil’s #1 trading partner, and Chinese corporations have invested over $120 billion in Brazil since 2004, with most of this investment going to the energy sector (South China Morning Post). Because of this strategic economic alliance with China, Bolsonaro’s decision to edge closer to the United States in political rhetoric and economic policy may complicate relationships with Chinese corporations and investors.

Aside from choosing to make his first official foreign visit to the U.S., Bolsonaro has made some other questionable statements and decisions with regard to China that have investors and foreign policy strategists concerned. When he was still a candidate for the presidency, for example, he once accused China of ‘buying Brazil,’ and then made the controversial decision to visit Taiwan (The Guardian).

Despite these puzzling political moves during his campaign, and a newfound solidarity between Bolsonaro and Trump, for the time being experts do not consider Chinese-Brazilian relations to be at serious risk. Though Bolsonaro took his first foreign trip to the U.S., he plans to meet with Chinese President Xi Jinping on two separate occasions in the summer of 2019. He will meet with Xi for the first time at the G20 Summit in Japan in June, then again when the Chinese president attends a summit with BRIC countries in Brazil shortly after. Additionally, Bolsonaro has confirmed that he will formally visit Xi Jinping in China at some point in the second half of 2019 (SCMP).

So, for the time being, it does not appear that relations between Brazil and China is in any serious danger. However, recent alliances made between the U.S. and Brazil, and the blossoming friendship between Jair Bolsonaro and Donald Trump, is certain to agitate investors in China. President Bolsonaro will find himself in a precarious situation as China and the U.S. continue to clash over major foreign policy issues and an ongoing trade war. In the coming months, as Bolsonaro is forced to side with one global superpower over the other on major geopolitical issues, his true allegiances will certainly be put to the test.