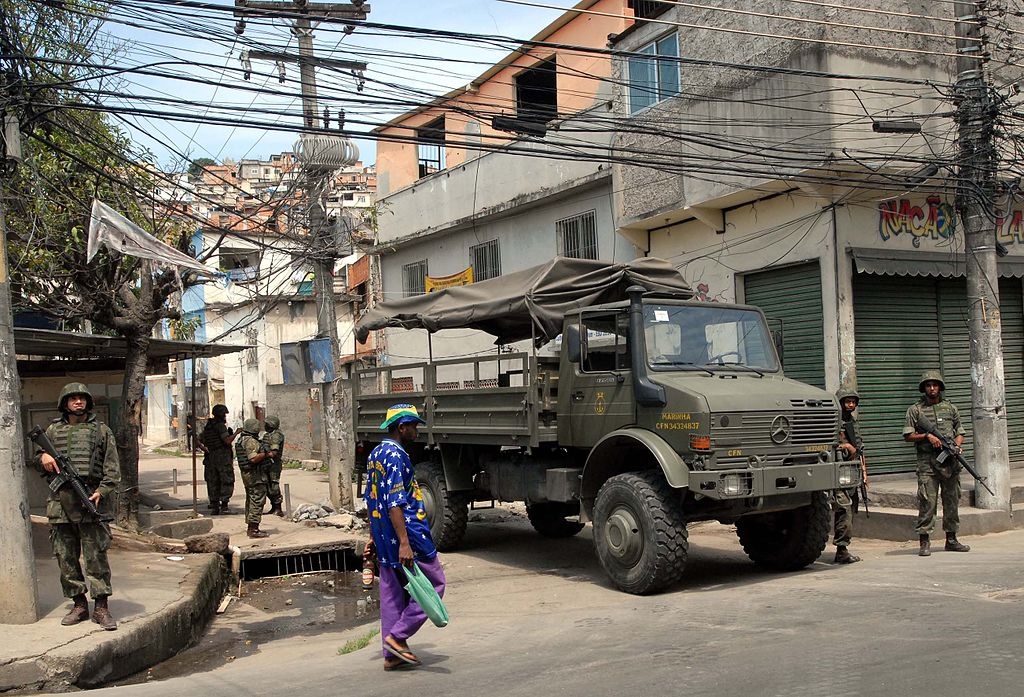 What role do civil society and social movements play in controlling violence in Latin America and the Caribbean?  Over the past forty years the region has experienced elevated levels of criminal and police violence.  Governments, international aid agencies, scholars, and foundations have all looked at this problem and sought to develop solutions.  Much of the writing, funding, and policy strategies to reduce violence have focused on the role of governments in these efforts.  On the whole, civic actors and social mobilization have received less attention.
There is some cause for this lack of attention.  On many levels real, long-term solutions to criminal and police violence depend on consistent and adaptive state responses.  Nonetheless, civic action can play important roles in containing violence on its own.  The role of civic groups is particularly important in changing state behavior and promoting police efficacy in a context in which government agencies are inconsistent in the application of the rule of law and, often, corrupt and abusive.
The article that I published in this issue of the Latin American Research Review takes up just this issue (here).  Using data from field research that I have undertaken since the mid-1990s in Brazil, Colombia, and Jamaica, the article examines the dynamics under which civic mobilization seeks to address violence.  Particular types of challenges with crime and policing lead to different civic strategies to control bloodshed.  Some types of civic response have relatively low bars to activation while other have very high bars.  Responses are also strongly context dependent with particular types of mobilization occurring in some countries and under some violence dynamics.
The article builds this analysis on three critical observed differences in forms of civic action.  The first is the distinction between short-term and long-term responses.  A great deal of the civic mobilization in response to violence are short-term protests that emerge at particular moments.  These actions may be part of wider and more systematic civic organizing that only becomes apparent at a particular moment.  Many of these mobilizations, however, are spontaneous and in response to particularly egregious acts of police violence.  The danger of staging protests against criminal organizations and the ability to use public opinion to pressure government officials means that most of these forms of action are directed at police and not gangs.
The second distinction made in this article, and addressed briefly above, is whether actions are directed at police or criminal violence.  These two types of violence are deeply intertwined with criminal organizations at times acting as extensions of police and vice versa.  A good deal of the violence by both actors is also embedded in the dynamics of corruption that govern a great deal of criminal justice activity in the region.  Nonetheless, efforts to contain the behavior of police and criminals require very different responses.  Police, for all their flaws, are ultimately responsible to state officials.  Under the democratic regimes that govern much of the region, that means that there is at least a formal rule of law that occasionally functions and higher-level elected officials that are at times responsive to popular demands for police reforms (on this issue see Gonzalez 2019).  Civic action can also contain criminals but carries very different risks.
The final distinction focuses on whether civic groups constructively engage with violent actors or seek to undermine and repudiate them.  Different types of violence require different types of responses.  In some cases, civic actors may seek to engage in more combative efforts to constrain violent actors by pressing cases in court or by working with groups that can bring those actors to justice.   Alternately civic actors may choose to work constructively with violent actors to convince them to diminish violence.
One important variable that describes the paths to civic response is micro-level armed regimes.  I developed this concept in my 2017 book Criminal Enterprises and Governance in Latin America and the Caribbean (Arias 2017) where I argued that different conditions of criminal organization and the relationships between those criminals and the state generates different types of neighborhood-level governance patterns.  These governance dynamics shape the types of violence control actions that civic groups pursue.  Thus, in an environment in which the police have strong relationships with criminals, there will be different types of responses by civic groups than in conditions where criminals and police are involved in ongoing confrontations.
I argue that there are four basic illicit governance patterns.  The first is criminal disorder which exists when criminals are disorganized and the government makes little effort to intervene in criminal conflict.  In these environments there is a great deal of public violence but the weak criminal groups that operate in this context have little power over civic groups or the state.  The second is divided governance in which criminals are well organized but they compete with the state.  Here criminals and the state often violently divide governance responsibilities.  So, the state may provide education and some social services but the criminals will resolve disputes and provide other types of social assistance.  Here, criminal organizations control some civic groups.  The third type of micro-level armed regime is collaborative governance.  This emerges where criminals are well organized and have positive relations with the state.  Under these circumstances, criminal groups exercise governing authority on behalf of the state in the areas they control. Criminal groups have strong control of civic actors and social mobilization.  The fourth type of criminal governance is tiered or layered governance.  This emerges where criminals are disorganized but the state negotiates with criminals to control conflict.  Here, the state uses criminals in their governance efforts.  Civic groups are independent but need to secure support from criminal groups in their efforts to change policy.
These three variables yield six different cases outlined in table 1.
Table 1:  Civic Responses to Violence 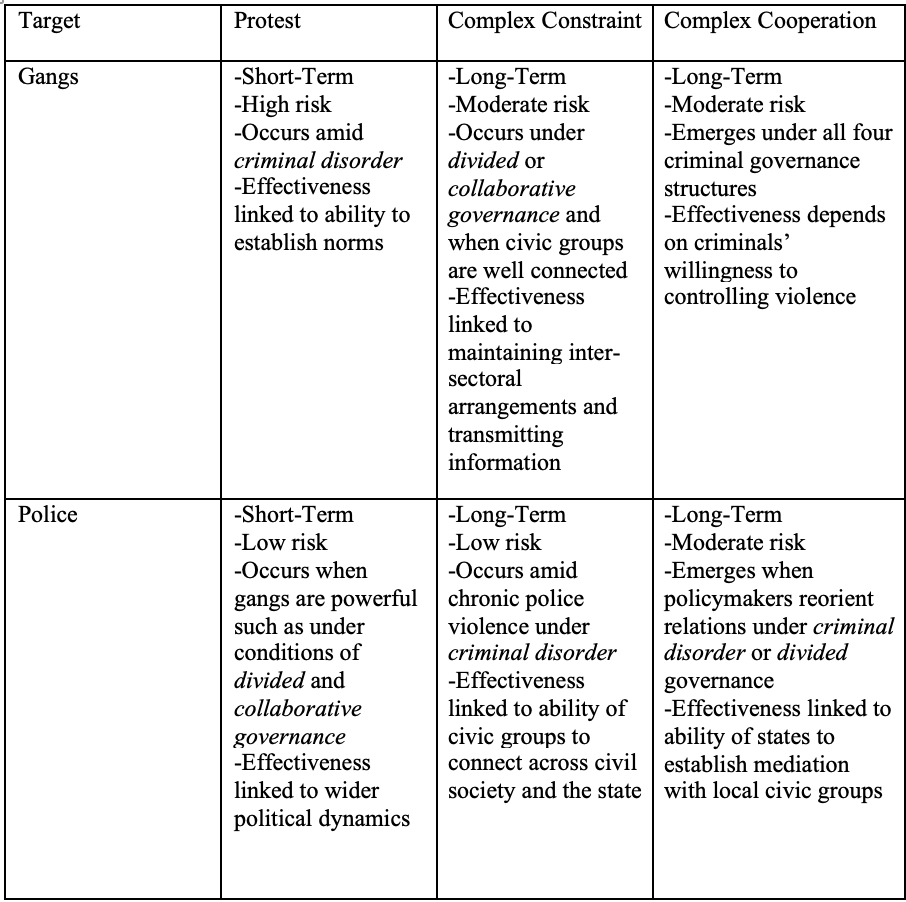 As the Table 1 shows, civic groups’ choice of action is often driven by the type micro-level armed regime they confront.  Protests against gangs occur when those gangs are divided and fighting against each other.  Alternately, protests of police emerge when police engage in violence against ordinary residents of communities especially as a result of confrontations between gangs and police that occur often when criminals are well organized.  The article details under what conditions these forms of civic response emerge.
The article also discusses particular geographic and political dynamics that lead to different types of civic response.  On the whole, there was substantial evidence that in the Brazilian cases civic groups focused more on responding to police violence than criminal violence.  In Colombia, on the other hand, there was significant evidence of efforts to work constructively with state actors to constrain gang behavior.  Jamaica showed evidence of some limited protest against gangs and the police.  On the whole, protests against police and active cooperation with gangs to reduce gang violence were seen in all cases and were the most common responses found in the research.   Generally speaking there is extensive evidence of civic leaders’ reluctance to work with police to control gang or police violence perhaps because of a fear of retaliation by gangs or violent police.
This article shows the complex ways that civic actors can seek to reduce violence, perhaps the most pressing policy issue facing Latin America today.  Understanding the ways that micro-level armed regimes and other local and national dynamics create pathways for certain types of civic actions can provide a framework for developing strategies to promote more successful civic action to reduce police and criminal violence.  A close analysis of these patterns can aid civic, state, and international actors.
Picture: https://commons.wikimedia.org/wiki/File:Marinha_no_Rio.jpg
References:
Arias, Enrique Desmond.  2017.  Criminal Enterprises and Governance in Latin America and the Caribbean.  New York:  Cambridge University Press.
González, Yanilda.  2019.  “The Social Origins of Institutional Weakness and Change:  Preferences, Power, and Police Reform in Latin America.”  World Politics 71 (1):  44-87. 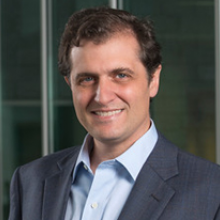 Enrique Desmond Arias
Enrique Desmond Arias is the Marxe Chair in Western Hemisphere Affairs in the Marxe School of Public and International Affairs at Baruch College, City University of New York. He is the author of Criminal Enterprises and Governance in Latin America and the Caribbean (Cambridge University Press, 2017) and Drugs and Democracy in Rio de Janeiro: Trafficking, Social Networks, and Public Security (University of North Carolina Press, 2006) and co-editor of Violent Democracies in Latin America (Duke University Press, 2010).