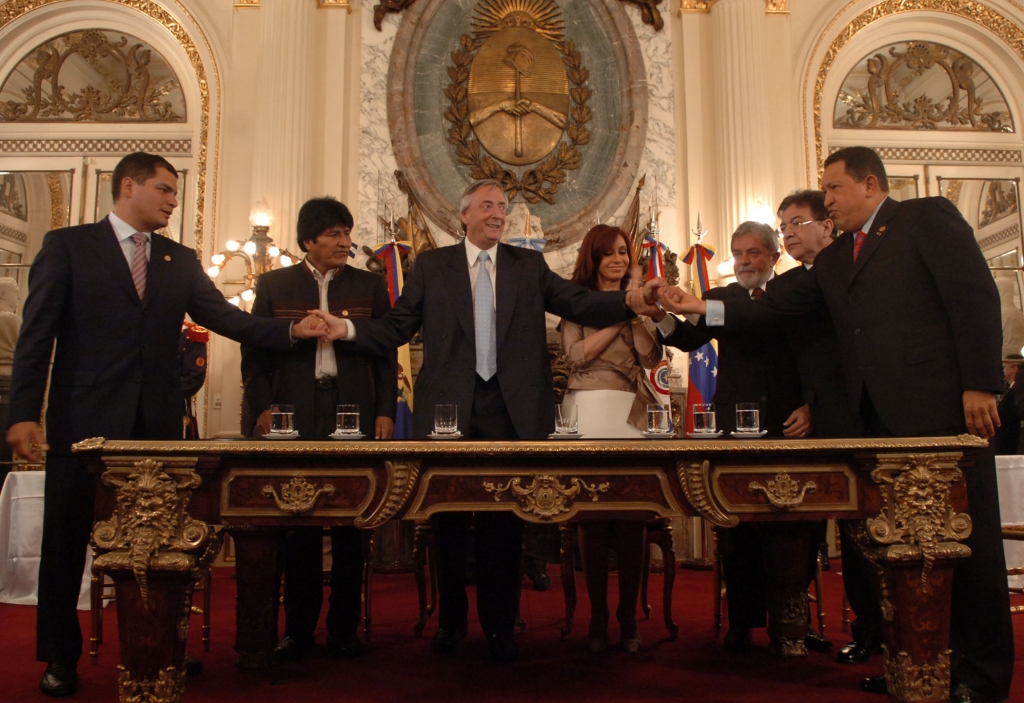 The "Pink tide" that swept across Latin America in the early part of the 21st century motivated political economists to develop a litany of theories to explain economic policy decisions under leftist governments in Latin America. And for the past fifteen years or so, these theories have done a fairly good job of driving scholarship on Latin America. However, the tides of Latin American politics appear to be changing, and we have already seen what some call a "return to the right." In Argentina, the election of right-wing President Mauricio Macri, has, for some, sounded the swan song of the neo-developmentalism of Kirchnerismo, and foreshadowed the return of more neoliberal policies in Argentina. Similarly, we have the return of Sebastian Piñera and the right in Chile. The rise of Acción Democrática, as part of an opposition electoral coalition, and its resounding victory over Partido Socialista Unido de Venezuela in the parliamentary election in December 2015, suggest that left-wing parties may fall in Venezuela if free and fair elections are held. Even in Brazil, Latin Americas largest economy, the conviction of Luiz Inácio Lula da Silva on charges of money-laundering and corruption has led some to believe that the center-right may make dramatic gains in the 2018 election. 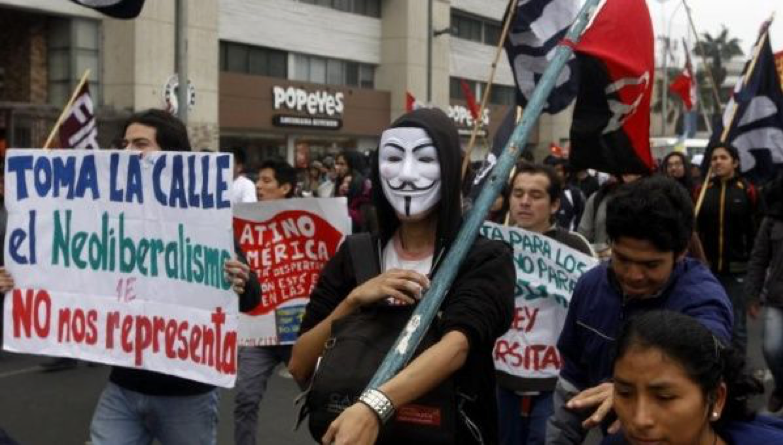 The research focus on economic policy decisions under leftist governments has resulted in little scholarly work on decision making under rightist governments, a concern given the inroads of rightist politicians in Latin America. We build on the few studies that investigate economic policy decisions under rightist governments and attempt to solve a puzzle in the literature. Although some rightist governments have adhered to a strict neoliberal model, others have shown less doctrinaire attachment to market reforms, which is puzzling since rightists have traditionally favored minimal government intervention in the economy. We contend that policies of this kind are fairly unpopular. Right parties need to support the interests of their constituents, many of whom question the benefits of most orthodox neoliberal policies. Survey data conducted by the polling service Latinobarómetro between 2002 and 2009 indicate fairly strong public disapproval for most market policies in all Latin American countries. In a question about satisfaction with the functioning of the market economy, on average, less than 27% expressed satisfaction with the operation of the market while more than 73% responded not very satisfied or not at all satisfied.

Given their preference for market reforms, many would expect rightist leaders to back neoliberal policies. However, we argue that because of the clarity of responsibility that arises when they gain increasing electoral margins, rightist presidents experience cross pressures that often make them less likely to uphold the most strict market policies as compared to governments who win closer elections. Clarity of responsibility works like this: when a government wins an election by a small margin, blame attribution for unpopular policies is more difficult, as compared to when governments win by large margins and hold a political mandate, since policymakers have a greater ability to blame unpopular policies on their competitors. Instead of emphasizing neoliberal economic policies, rightist leaders with political mandates will call greater attention to more popular measures that reflect its party's strengths including managing public order and security, pledging support for conservative social policies, and promoting government programs serving the very poor, all as means to win elections and stay in office.
We find that initial increases in the presidential margin of victory, which produces greater clarity of responsibility, results in an expected decrease in the likelihood that right presidents will promote the strictest market-oriented reforms. However, this effect is not continuous across the entire spectrum of margin of victory. We find that once the presidential margin of victory surpasses about 25%, increasing presidential margins produce greater likelihood of the implementation of the most orthodox market-oriented reforms, as at this point leaders have become increasing less vulnerable to electoral challenge. Our primary finding is this: clarity of responsibility will reduce the likelihood of implementation of unpopular policies insofar as presidents face electoral vulnerability. Once a president's electoral advantage becomes large enough to produce a safe electoral position, the negative effects of clarity of responsibility on the implementation of preferred policy dissipates. Rightist governments thus enact greater neoliberal market reforms, when such reforms are fairly unpopular, under two conditions; when the election is close enough to cloud the clarity of responsibility, and when the margin of victory is so great that the executives are seemingly impervious to political challenges. 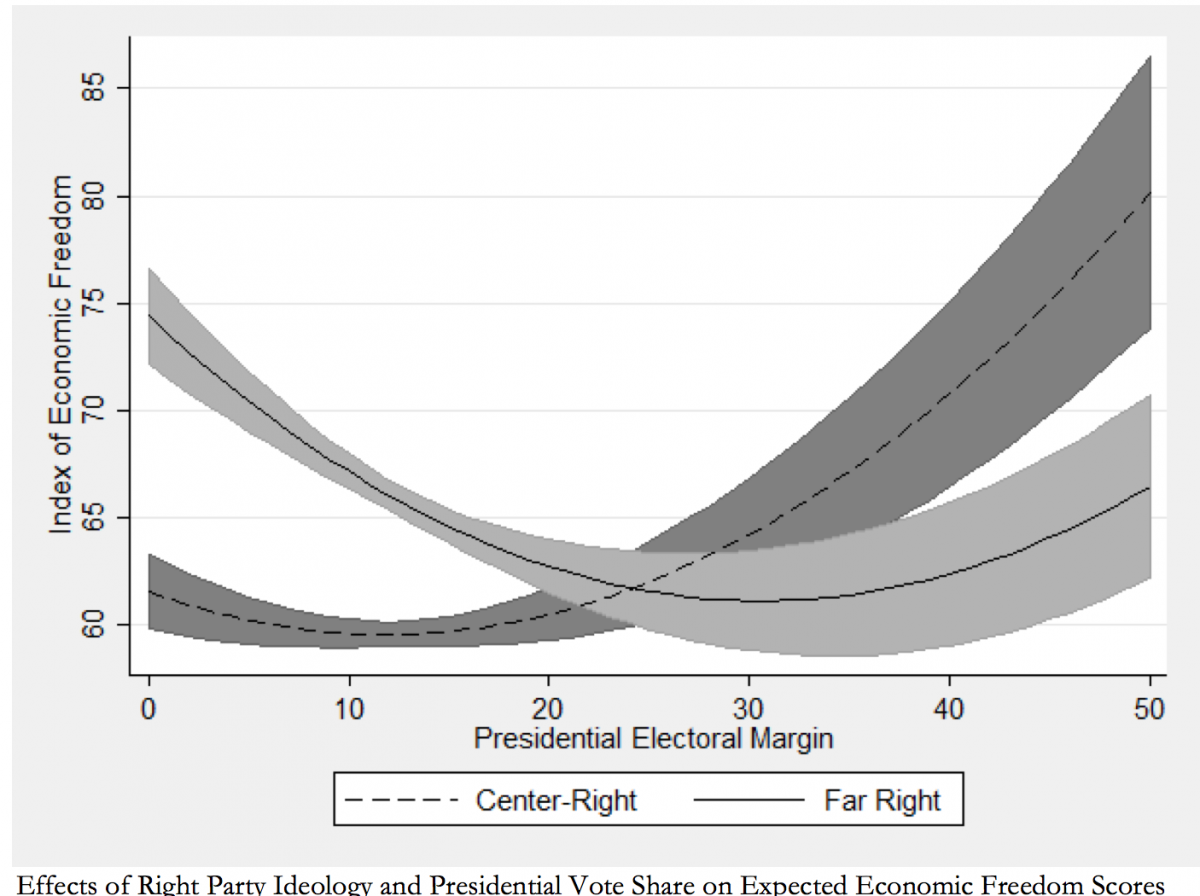 The experience of Colombian President Álvaro Uribe shows how a mandate affects policies under rightist rule. For more than forty years, Colombia has faced security issues and armed conflict with guerrillas, particularly with the Marxist-Leninist Revolutionary Armed Forces of Colombia (FARC). In 2002, Uribe presented himself as a political outsider, who would address problems the two long-standing political parties in Colombia, the Liberal Party and Conservative Party, could not seem to solve, namely, to root out and end armed conflict with the FARC. Security concerns took precedent in both of Uribe’s terms, 2002-2006 and 2006-2010. Indeed, the budget for the military and police force increased from 2% of GDP in 1990 to 6.35% in 2008. A milder form of neoliberalism also emerged under Uribe. Although Uribe encouraged foreign direct investment, private ownership, and negotiated free trade agreements, part and parcel of the neoliberal model, he recognized that not all Colombians favored market policies. Uribe responded by backing government-financed social development policies in education, health, and public services, as part of a strategy to encourage more equal income distribution. Uribe also instituted assistentialist policies, such as Families in Action, providing state relief to the most vulnerable families. The assistance programs increased the total number of beneficiaries from 83,726 in 2001 to 1,559,369 in 2007. Thus, Uribe enhanced security, promoted more equitable income distribution, and implemented more targeted spending programs for the poor, all apparently as measures for helping to achieve his electoral goals. 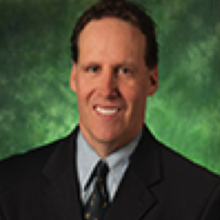 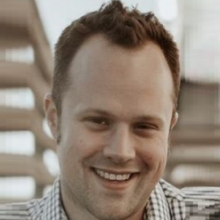 Ronald J. McGauvran
Ronald J. McGauvran is a PhD Candidate at the University of North Texas, with research interests in economic inequality and political behavior. His dissertation, The Middle Matters: Political Responses to Income Inequality in an American State examines the participatory effects of income inequality at the community level.