Politicization and the Institutional Legitimacy of the Venezuelan Armed Forces 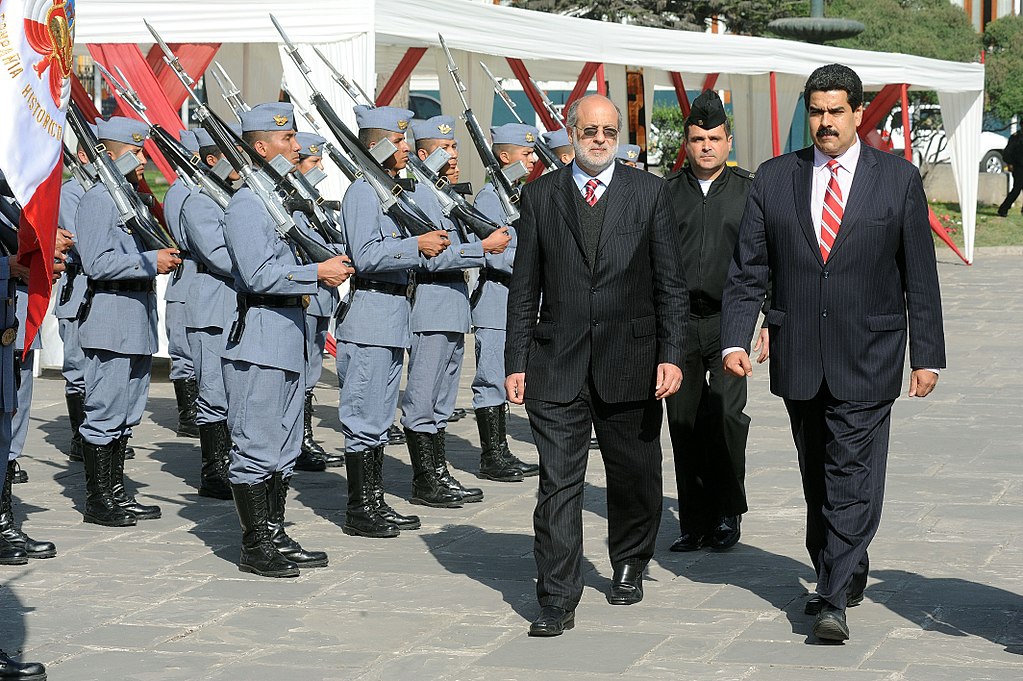 The Venezuelan National Bolivarian Armed Forces (Fuerzas Armadas Nacionales Bolivarianas, FANB) are among the most politicized in the Americas. While this has helped maintain President Nicolás Maduro in power, it is damaging for both the military and citizens. Specifically, while politicization helps bolster the government’s permanence it undermines the military’s institutional legitimacy.

Using Latin American Public Opinion Project (LAPOP) survey data, I show in a recently published article in the Latin American Research Review that respondents sympathetic to Maduro are more likely to have a favorable view of the military while those identifying as opposition are more likely to have a negative view, regardless of the military’s actual actions. This suggests that politicization of public agencies impose an upper limit on public support regardless of institutional performance, undermine their representativeness and legitimacy, and weaken their mandates. With specific regards to Venezuela, it also indicates that re-professionalizing state institutions is imperative to improving their legitimacy.

Who supports the military: the argument
Part of the scholarly literature argues that demographic characteristics and interpersonal trust drive public opinion of the military, and bureaucratic agencies in general. For example, studies show that men tend to have greater confidence in the armed forces than women, and, in the United States, that minority groups tend to have greater trust in the institution than the majority group does (Leal 2005). Other theories posit that public opinion is shaped by individual evaluations of agency performance, like military effectiveness (Malešič and Garb 2018).

However, many of these studies are from the developed world and draw from neutral (i.e. unpoliticized) militaries. I argue that this is different for a politicized agency—one in which politicians have substituted political criteria for merit-based criteria in selection, retention, and promotion, and that exercises loyalty to a single political party and/or advocates for and defends partisan political positions and fortunes. I believe that politicization activates voters’ partisan attachments, inducing individuals to judge the agency (e.g. the military) on the basis of their ties to the governing party or leader.

Because—as a great deal of academic literature has shown—partisan commitments play such a large role in shaping attitudes toward political objects, politicization should lead individuals to identify agencies as a partisan extension of the administration. Under bureaucratically neutral conditions, demographic factors, levels of interpersonal trust, the nature of interpersonal contact, and agency performance should all help determine public opinion toward the armed forces, as the scholarly literature indicates. However, as neutrality erodes, partisan attachments to the government should become a much more salient structuring factor.

In Venezuela’s case, this suggests that regardless of demographics or the military’s performance, an individual’s view of the government is the most important factor at determining their opinion of the military: supporters should trust it, and members of the opposition should not.

Venezuela’s FANB has become increasingly politicized since 1999, when ex president Hugo Chávez (1999-2013) sought to transform the military into a socialist revolutionary partner (Norden 2008). In this renovation of civil-military relations, the president justified his participation in a 1992 military coup as legal, relied on active-duty and retired officers to perform political and administrative functions, and directly intervened in officer promotions and assignments (Trinkunas 2005, 210). He also reoriented the military’s role from national defense to internal security and national development, even using the 1999 Constitution to create a legal justification for the sudden centrality of the armed forces to domestic politics.

Reliance on the military to carry out domestic task implementation increased substantially after a 2002 coup that temporarily removed Chávez and led him to identify and penalize coup perpetrators. The fallout from this event led the administration to tighten its circle of trusted supporters and give influential government positions and lucrative contract opportunities to loyalists within the military.  Since that time, the government has punished perceived support for the political opposition from senior officers by removing them from office. Significant purges have continued since, even against officers who had been prominent government allies.

The government has also attempted to indoctrinate and dictate the political beliefs of the officer corps. A 2007 reform demanded soldiers to salute with the phrase “¡Patria, socialismo o muerte! ¡Venceremos!” (“Fatherland, socialism or death. We will prevail!”), and a 2008 organic law changed the name of the military from the “National Armed Forces” to the “Bolivarian National Armed Forces”, specifically invoking the defense of the president’s political project. This has deepened under President Nicolás Maduro (2013-present). A recent report from Reuters explains how a military overhaul blurred commands, politicized the ranks and drafted troops into partisan activities.

Data and findings
To test my theory that partisan cues are responsible for shaping public opinion toward a politicized agency, I use data from five waves of surveys from the Latin American Public Opinion Project (LAPOP). Each wave consists of 1,500 randomly sampled individuals from across Venezuela. To operationalize the dependent variable, trust in the FANB, I use the closely related variable confidence in the armed forces, a seven-point ordinal response gathered during all survey waves.

To capture the opinion of the government and partisan cues, I include measures of: presidential approval; whether the respondent voted for Chávez (2006, 2008, 2010, 2012) or Maduro (2014); whether the respondent identifies as Chavista; the frequency with which the respondent attends government-run Communal Council meetings; and the left-right ideological self-placement of the respondent. I also control for alternative explanations by including a host of demographics and agency performance variables.

Figure 1. Confidence in the FANB by approval of presidential performance 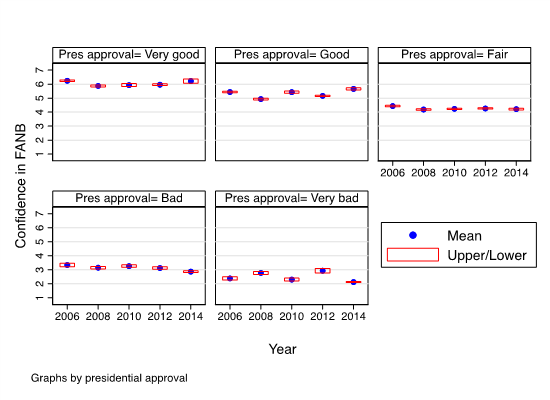 A series of ordered logit regression analysis reinforces these findings, revealing a strong statistical and substantive relationship between partisanship and confidence in the armed forces. Presidential approval and the series of proxies for government support are positive and significant across all specifications. The variable retains its sign and significance while controlling for citizen perception of military effectiveness in the form of military training, the FANB’s response to natural disasters, and perceptions of the military’s respect for human rights. Moreover, the same relationship exists between all sorts of other proxy variables of government support: presidential vote, party ID, attendance at pro-government meetings, and ideological self-placement.

Although exogenous determinants of demographics and interpersonal trust are statistically significant to varying degrees and under different specifications, their substantive impacts pale in comparison to the effect of political leanings and perceptions of FANB performance.

To illustrate the substantive effects that partisanship has on the politicized military, I calculate the predicted probabilities of different levels of confidence in the FANB across views of presidential performance (all other variables held at their means). Figure 2 shows that as a respondent’s evaluation of the president moves from very bad to very good, the percentage of respondents with no confidence in the FANB falls fifteen percentage points from 18 percent to 3 percent, whereas the percentage with “full confidence” rises twenty-four percentage points from 7 percent to 31 percent.

Figure 2. Predicted probabilities of confidence in FANB by presidential approval 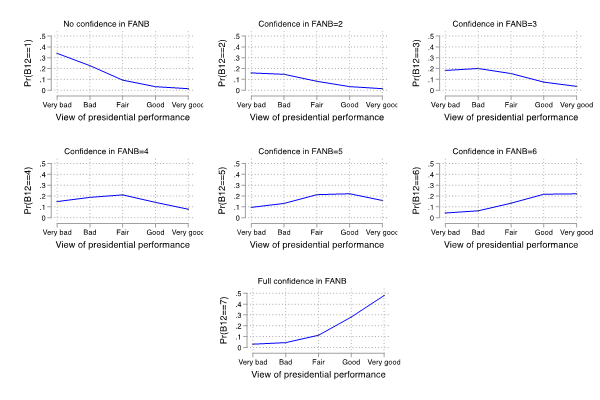 What all of this means
These findings matter for a lot of reasons. Beyond how they may inform scholarly debates, they have direct real-life implications for Venezuela.

Politicized agencies should be more vulnerable to rapid turnover than neutral agencies. One risk for Venezuela is that when Maduro or his party finally leave power, the military and other state bodies may experience something akin to Iraq’s de-Baathification—let’s call it “de-Chavezation”. This would mean a loss of expertise, a reduction in agency capacity, and pose further risks to Venezuelan security.

The results matter for other institutions. If similar survey data existed, one would expect to see comparable polarization of public opinion toward other Venezuelan public agencies, such as the National Electoral Council, the Supreme Court, and the Public Ombudsman.  Similarly, if politicization and polarization are necessary conditions for structuring attitudes, then there should be similar patterns in other countries with divided politics and similarly politicized public agencies, like in Ortega's Nicaragua.

In short, politicization of public agencies matters for organizational legitimacy and is likely to hurt agency capacity and performance. Among the many challenges facing Nicolás Maduro's successor, re-professionalizing the military and the state should be at the top of the list. 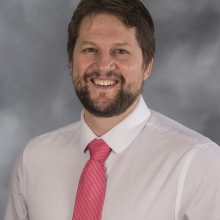 John Polga-Hecimovich
John Polga-Hecimovich is an assistant professor of political science at the United States Naval Academy. His research is broadly focused on the effects of political institutions on democratic stability, policymaking, and governance, with a focus on Latin America. He has published peer-reviewed research in The Journal of Politics, Democratization, Political Science Quarterly, and Latin American Politics and Society, among others. He has also been quoted about the Venezuelan military in The New York Times, The Wall Street Journal, National Public Radio, and Venezuela’s El Nacional. The Chigüire Bipolar follows his twitter feed (@jpolga).