Inside the Cuban Embargo 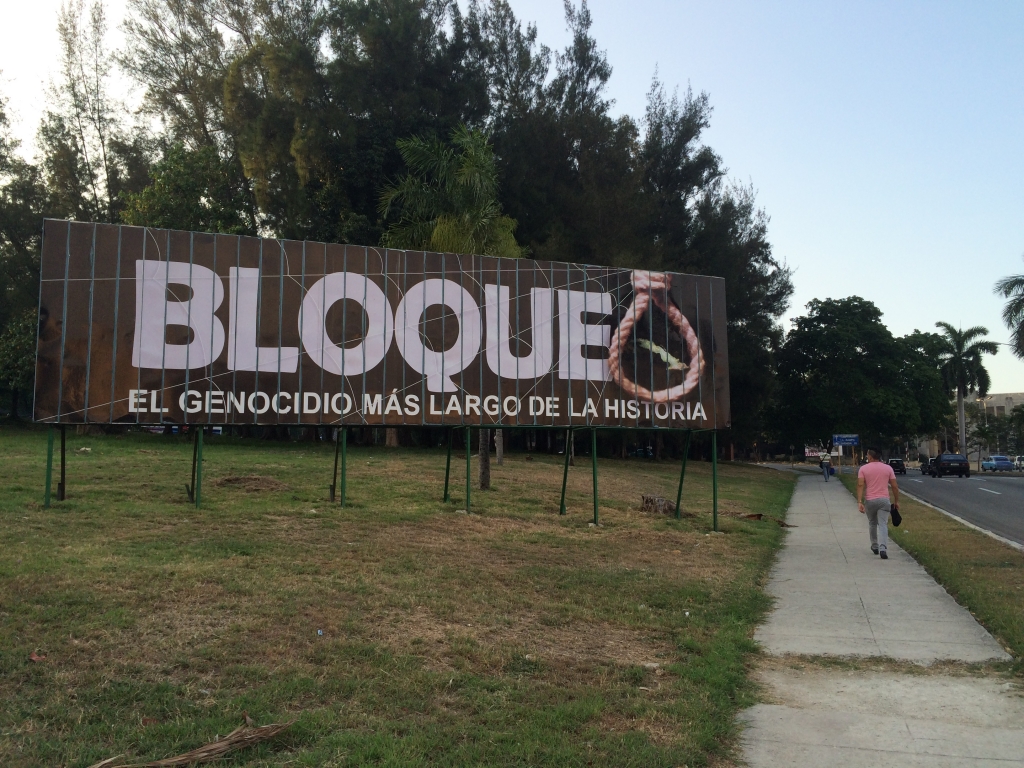 In Havana, Cubans have a saying: When something goes wrong; when food takes a long time to come out at a restaurant; when all the taxis passing by are full; when someone trips over a bump in the sidewalk—they say, “Es el bloqueo.” This translates to: It’s the blockade (the embargo). It means that all the problems ever to have occurred in Cuba, big or small, are the fault of the embargo that the United States placed on all trade with the small Caribbean island over half a century ago.

The phrase is usually used as a joke. However, the reality of the embargo is taken extremely seriously. A common piece of government propaganda is a billboard that appears next to many highways around Havana and other cities, which declares, “Bloqueo: el genocidio mas largo de la historia,” or Blockade: the longest genocide in history. A noose forms the second O in the word.

Sure, “genocide” is dramatic, but that’s the style of the Cuban government. The idea is to draw attention to how the U.S. embargo has hurt the Cuban people. While there’s of course no way to tell how many deaths could have been avoided if the embargo didn’t exist, it is true that there have been many. Cuba says that the embargo has cost them $USD 117 billion over the years, a figure which when adjusted for the depreciation of the dollar translates to $USD 1.1 trillion today.1 This number in itself is staggering, especially for such a tiny nation. But beyond the money it cost, the embargo has prevented foods and medicinal products from being imported to Cuba. Setting aside the dearth of consumer goods that exists (which for an American like me was a shock to the system in itself), I was dismayed at the low food variety in Cuba—for example, from January to June it’s nearly impossible to find fruits besides plantains, pineapples, mangoes, guavas and papayas at local markets in Havana. U.S. restrictions on food imports has contributed to widespread malnutrition in Cuba, especially for women and children. Water purifying equipment and chemicals have been barred from entering Cuba resulting in water quality issues. Further, the embargo blocks some medicines and health equipment, such as antiretroviral HIV drugs and vaccines for children.

A 1997 study by the American Association for World Health (AAWH) said that “few other embargos have so restricted medical commerce as to deny the availability of life-saving medicines to ordinary citizens. Such an embargo appears to violate the most basic international charters and conventions governing human rights.” The study concluded that “a humanitarian catastrophe has been averted only because the Cuban government has maintained a high level of budgetary support for a healthcare system designed to deliver primary and preventive healthcare to all of its citizens.”2

The U.S. embargo has been unpopular in the international community for decades. Within Cuba, the “blockade” is considered absurd at this point. When I asked Cubans for their thoughts on the embargo, the first reaction was often a shrug or a laugh and something along the lines of “They should have gotten rid of it a long time ago.” A friend and I spoke with a 79-year-old man from Morón who brought up the embargo. When I told him, “We don’t want the blockade,” he looked up at me as if startled. “Of course you don’t,” he said. “No humane person wants the blockade.”

Cubans openly acknowledge that their little island nation can’t survive on its own, without trade or aid from outside. A historian at the University of Havana told me, “If they get rid of the blockade, then Cuba has to demonstrate that it can develop economically by itself. Which it hasn’t been able to demonstrate up to now.” Cubans face a sort of catch-22: With the blockade, their economy is strangled; without the blockade, they fear becoming dependent on foreign trade, investment, and industries such as tourism.  Former president Fidel Castro, in a letter to U.S. president Obama published in a national newspaper, argued that Cuba is fine on its own: “I warn, furthermore, that we are capable of producing the food and material resources that we need, with the efforts and intelligence of our people.” A blogger on Havana Times, an online newspaper written by Cubans but edited and published in Nicaragua to avoid government prosecution, reacted, “Could it be that the Comandante, now a devoted agricultural researcher, has a miracle in store for us?”3

Most Cubans also recognize that, “of course, the blockade isn’t totally to blame 100%,” as the historian from the university told me. People do not actually believe that all of Cuba’s problems are the fault of the U.S. One woman I met, from Camaguey, told me that the blockade is not the problem here at all. The problem is Fidel. He, not the United States, screwed up Cuba, she believes, and it is his fault that so many young Cubans are trying to leave the country. “You’re young enough to be my child,” she said. “If I’m your mother, and I can’t give you chicken, and I can’t give you medicine, and I can’t give you freedom of the press, then what do you do? You leave.” All the smart, talented young people want to leave Cuba to find opportunities to use those talents, she explained. If they go, then no one remains to push the country forward as today’s older generations age.

She isn’t wrong that everyone wants to leave. When asked what he thought of the United States, a 20-year-old dancer told me, “Well, I want to go there, like all Cubans.” Few I spoke to disagreed with him. Famously, young Cubans who cannot legally travel outside the country often try to reach the United States by illegally crossing the 90 miles of ocean between Havana and Florida on a homemade raft, a trend that has diminished in recent years but is still highly relevant in Cuba’s cultural imagination. One 24-year-old man I met, a carpenter from Cienfuegos, told me that he has tried to cross the Straits of Florida twice in the past two years, and that both times he was caught. Why? According to a middle-aged university professor, people may leave to escape “the misery, the need, the poverty” created in part by the blockade. But for some, it is not so much a matter of economic opportunity as political liberty—specifically, in the case of the young carpenter, the ability to exercise free speech.

In my experience, Cubans always emphasized the fact that they themselves are not the only ones hurt by the blockade. The people of the United States, Cubans pointed out, face disadvantages too: They cannot travel nor invest in a normal manner in Cuba, among other things, preventing intellectual, cultural, and scholastic exchange as well as economic. “It limits all type of interchange—you know it as well as I do,” one man said to me. “This policy of the blockade doesn’t only hurt Cubans, it also hurts North Americans very much.”

For Cubans, whether or not the blockade is withdrawn is a matter of humanity, because, as the elderly man from Morón said, “We all belong to the same race: human beings.” Almost all Cubans seem to share this feeling of comradery with the people of the U.S., purely because we’re people. This, I believe, is an example of the characteristic big-heartedness of Cuban culture. “In the end, we are all brothers,” a 28-year-old dancer from Havana told me. “I want to tell Americans to love much among themselves, and to love all peoples, and to always feel proud to be American, as we feel proud to be Cubans.”