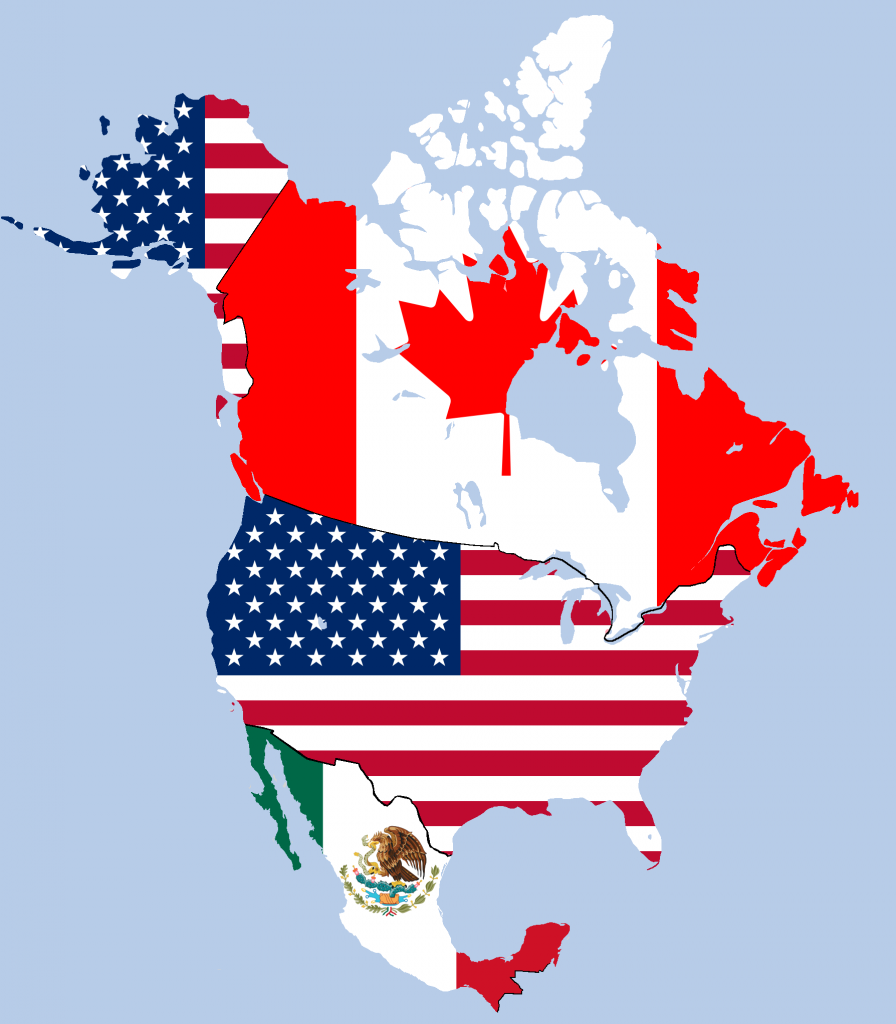 The North American Free Trade Agreement, or NAFTA, has been a controversial piece of legislation since its conception in 1994. This controversy has been reignited since Donald Trump, now the president of the United States, has repeatedly referred to NAFTA as ‘the worst trade deal ever signed’, and a threat to U.S. manufacturing jobs (New York Times). During his election campaign, one of the largest proposals of his platform was to withdraw from the agreement, an idea on which he has flip-flopped quite a bit since his 2017 inauguration.

This week, on Tuesday, January 23, Donald Trump’s threats will be put to the test as leaders from the U.S., Canada, and Mexico meet for the 6th and penultimate round of negotiations in Montreal.

In the most recent negotiations, President Trump demanded a few highly controversial proposals, and threatened to terminate the deal if the demands are not met. One of the most problematic of these includes a rule that would set minimum levels of U.S. content for automobile production. This demand is part of a ‘sunset clause’ which would require a renegotiation of NAFTA every five years. This rule is based in Trump’s claims that the trade deal inherently hurts American workers, and that new provisions must be established to encourage U.S. jobs and industry.

It is unclear whether this ‘sunset clause’ would actually benefit American automobile industries. Many, such as General Motors, hold manufacturing facilities in Mexico, meaning that the cost of their production would skyrocket if NAFTA were to be terminated or subject to stricter provisions such as this.

What has NAFTA done?

NAFTA came into effect in the 1990s in an effort to improve relations between the U.S. and Mexico, two countries that have had quite a contentious economic and political relationship since their formations. Since its conception in 1994, NAFTA has undoubtedly transformed political and trade relations between Canada, the U.S., and Mexico, with drastic liberalization and almost a complete elimination of tariffs between the three countries (The Hill).

Part of this liberalization has meant heightened foreign investment in Mexico and an integration of industries across national borders. This means that production by American, Canadian and Mexican companies has become more efficient and more competitive in the global economic landscape.

A major concern with NAFTA’s conception has been that it would only cause U.S. and Canadian industries to move production across the border and into Mexico where labor is cheaper. Because of this concern, the trade agreement includes legal provisions on labor rights to ensure that Mexican workers would maintain a livable income.

It is difficult to find a direct link between the implementation of NAFTA and economic growth. However, it is undeniable that GDP has increased and that unemployment has decreased in both the U.S. and Mexico since 1993, with an expected hiatus in growth during the 2008 recession (Investopedia). The industries that appear to have been the most dramatically affected by NAFTA are those that were most directly impacted by the removal of tariffs, such as the textile, apparel, automotive and agricultural industries.

U.S. manufacturing jobs have decreased by around 30% between 1993 and 2016—however it is difficult to definitively say that this was a direct result of changes associated with NAFTA. It is often said that those in the U.S. most negatively affected by the agreement have been the automobile and textile industries, as many American workers have lost their jobs in these industries as production has moved across the border to Mexico.

Many economists argue that these industries may have actually been hit harder had NAFTA not been passed, as rival industries in Asia likely would have made competition too strong for North American companies to survive at all during this time.

Another argument for the passage of NAFTA in the 1990s was that it would reduce illegal immigration from Mexico into the U.S. This was based in the logic that, as the Mexican economy improved, so would living standards, thus reducing motives for Mexican immigrants to cross the border. However, this has not played out as expected, as the number of immigrants actually doubled between 1990 and 2000. Interestingly, this trend changed in the late 2000s, as more Mexicans began to leave the U.S. than enter it.

Why has it been so heavily criticized?

NAFTA began to be heavily criticized before it even came into effect—in 1992, then-Presidential candidate Ross Perot famously warned that, if the agreement were to be passed, it would create a ‘giant sucking sound’ from U.S. factories moving to Mexico to take advantage of cheap labor (Investopedia).

This claim—although dramatized by Perot’s campaign rhetoric—has proven, in many ways, to be valid. It is undoubtedly true that many American corporations have moved across the border into Mexico where the labor is cheaper, and that many Mexican maquiladoras workers have been exploited. Because of this shift, many have asserted that NAFTA’s existing labor and wage standards are not high enough.

Since Trump has been elected President, many of these decades-old criticisms have been reignited. He has repeatedly claimed that NAFTA is the worst trade deal that the U.S. has ever signed, and that it has caused a significant reduction in U.S. manufacturing jobs. He has stated that the trade agreement is ‘killing’ American jobs, as many American corporations have moved production to Mexico where labor is cheaper (New York Times).

The other main criticism that President Trump has made is of the ever-growing trade deficit between the U.S. and Mexico. While Mexico and the U.S. had a relatively balanced trade account before the passage of NAFTA, the trade deficit between the two countries is now the highest that it has ever been (Fortune). However, economists disagree over the direct causes of this deficit, and whether it really is a good or bad thing for America.

What can we expect in the upcoming negotiations?

It is undeniable that the North American Free Trade Agreement is a controversial piece of legislation, and that it has had both positive and negative outcomes for all three countries involved. With the penultimate round of renegotiations coming up this week, it is important to step back and see where each country stands.

As mentioned before, U.S. President Donald Trump has not been shy about his disapproval of NAFTA. His pro-American stance that has made him so popular with low-income workers in the United States is a predictor of how Trump may act in the upcoming negotiations. According to his claims that NAFTA is responsible for giving U.S. manufacturing jobs to Mexicans across the border, it may be in America’s immediate interest to withdraw from the agreement and support his voter base.

However, it is unclear whether Trump’s idea to ‘tear up’ the agreement (Investopedia) would actually be beneficial for the American workers that loyally support him—especially those with jobs in manufacturing or agriculture. Regardless of who NAFTA hurts or helps—which is a seemingly endless debate—U.S. lawmakers, Democrats and Republicans alike, have warned President Trump against terminating the agreement.

In the most recent round of negotiations, Trump proposed a series of provisions that many Mexican and Canadian lawmakers find extremely unrealistic; but many are fearful that, if Canada and Mexico do not agree to these provisions, that Trump will walk away.

According to NAFTA’s Article 2205, it would actually be quite easy for the U.S. to withdraw from the agreement. This article requires that any country interested in withdrawing from the agreement must give a 6-month notice—then, at the end of this 6 months, the country is more or less free to leave NAFTA, but not necessarily obligated to do so (Vox).

It is difficult to forecast what the U.S. President will do this week. Given his constantly changing stance towards NAFTA, and his naturally unpredictable character, we will simply have to wait and see which way Donald Trump decides to lean come Tuesday.

For Mexico, there is a lot at stake when it comes to NAFTA. Not only has the trade deal been responsible for tremendous economic growth in the country, but it has resulted in a new sort of economic and political dependency on the United States. If the U.S. were to withdraw, it would have dramatic effects on the Mexican economy—including unemployment rates, inflation rates, and the exchange rate between the two countries.

Additionally, the outcome of the upcoming presidential and regional elections in Mexico are very much dependent on the state of Mexico’s relations with the United States. Many predict that, if the negotiations do not go in Mexico’s favor, these elections will even be postponed.

In August 2017, Mexican Foreign Minister Luis Videgaray said that Mexico would leave the negotiating table altogether if Trump follows through on his threats to withdraw (Reuters). This stubborn stance comes from strong opposition to Trump’s proclaimed idea to insert into the negotiations his plan for Mexico to pay for a border wall.

Unlike Mexico, Canadian leaders have stated that, if Trump does announce a plan for the United States to withdraw, they would still stay at the table for negotiations to continue at a lower level (Reuters). Canadian officials are preparing for several scenarios, but appear increasingly convinced that Trump will threaten to pull out of the deal as a strategy to win concessions from Mexico and Canada.

In early January, Canada filed an official complaint against the U.S. over the way that it handles border taxes. This move is expected to inflame existing tensions over the NAFTA renegotiations.