Xenophobia and the American Immigration Debate: The way we view Latino immigrants 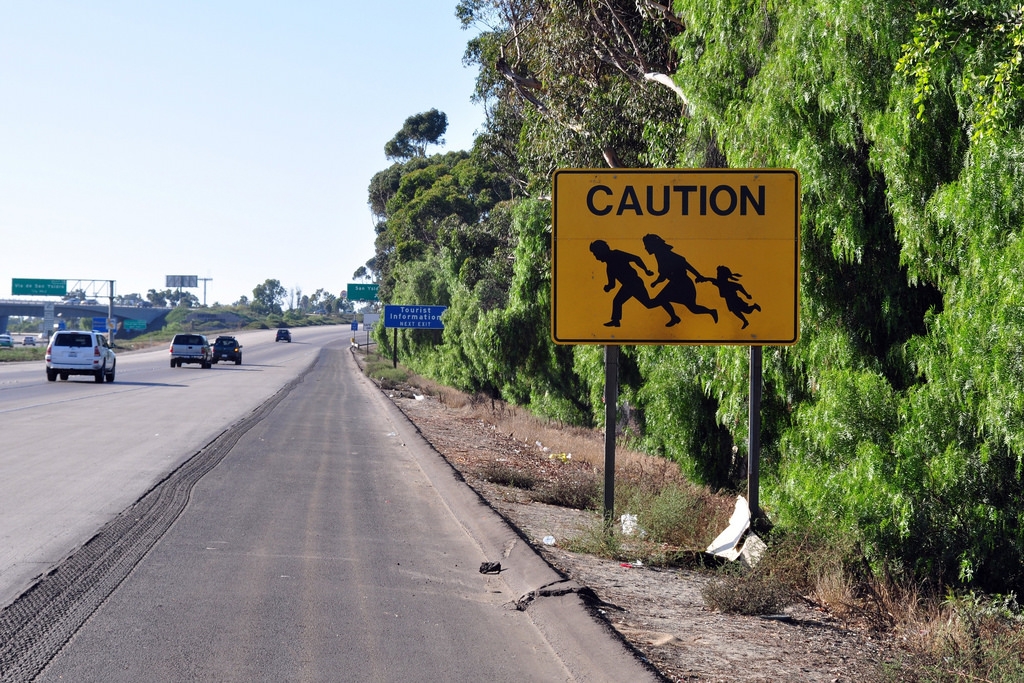 In the past few years, there has been a particularly prevalent and polarizing dialogue surrounding the role and the place of Hispanic and Latino immigrants in our country. In many ways, this is linked to the rise of Donald Trump to the presidency, inciting excitement in some and fear in others with his strong anti-immigration stance and particularly negative rhetoric towards immigrants—or, at least, towards immigrants from certain countries.

Trump’s ascent to power has inspired many conservative Americans, who may have felt less empowered under less radical leaders, to organize against existing policies that have made the United States a safe haven for immigrants and refugees to settle in. And, while a little bit of partisan conflict and debate is healthy in a democracy, the particular way that immigrants from certain countries—and Latinos in particular—have been singled out as a threat to American society has had an alarmingly xenophobic flare, and has made many U.S. citizens fear for their safety and security.

In recent years, the number and frequency of hate crimes against Latinos has skyrocketed, with clear links to Trump’s spreading influence and eventual victory in November 2016. A study conducted earlier this year reported that, in the first two weeks following Trump’s election, there was a 176% increase in the number of anti-Latino hate crimes in America’s largest cities (Center for Public Integrity). In California alone, reported hate crimes against Latinos have increased by 50% since 2016 (NPR). These hate crimes can include verbal harassment, physical assault, or worse.

The rhetoric spread by President Trump throughout his presidential campaign and since his election has worked to reinforce existing racial stereotypes against Latinos, and to describe America’s immigration situation as an issue of national security rather than of altruism. He famously described illegal immigrants from Mexico as ‘rapists’ and ‘bad hombres’ during the campaign process, and made dramatic claims that illegal immigrants from Latin America are ‘pouring in’ to our country across the border. He associated violence by aggressive gangs such as MS-13 with a lack of border security and lenient immigration policies, convincing his supporters that widespread reactive and exclusionary immigration reform is the only viable way to keep natural-born American citizens safe.

This aggressive anti-immigration stance has slowly been incorporated into nearly every aspect of the administration. For example, the United States Citizenship and Immigration Services (USCIS) has historically identified with the notion that America, a ‘nation of immigrants’, welcomes immigrants and the positive economic and cultural change that they bring. However, in March of this year, the mission statement on the USCIS website switched tones, no longer referring to America as a nation of immigrants, but focusing on the ‘protection of Americans’, ‘securing the homeland’, and accommodating requests for immigrant benefits (The Guardian).

Though a seemingly minor change, this new mission statement is largely symbolic of the idea that America will no longer serve to embrace immigrants, but to protect its own citizens in the face of the threats and burdens that immigration brings.

Many take issue with these newfound changes in American foreign policy towards immigrants, not only because it largely disregards the humanitarian aspect of welcoming migrants and refugees, but also because it has been very specific to target Spanish-speaking immigrants as the problem. As can be seen in Trump’s rhetoric and in the actions of many of his more extreme supporters, the problem is not necessarily that the United States has too many immigrants—but rather, that the United States has too many immigrants of certain racial and ethnic backgrounds.

In Trump’s own rhetoric, he tends to focus less on the number or type of immigrants, and more on the country of origin. His political platform has predominantly targeted immigrants from Muslim-majority countries, and from Spanish-speaking developing countries in Central and South America (The Atlantic). Such can be seen in comments that the president made last year in reference to American immigration policy, asking why the U.S. is accepting so many people from “sh*thole countries”—specifically referring to countries such as Haiti, El Salvador, and various African countries. This was then directly followed by the President’s own suggestion that the U.S. should instead be attracting more people from countries such as Norway. These statements, undeniably racially charged, offered a stark glimpse into what guides American policy towards immigrants and refugees.

In the face of a rise in anti-Latino rhetoric in American politics, and an increase in hate-fueled criminal acts against Latinos in the United States, we are often left with a few questions: Where do these ideas come from? Is there any validity to this? And, how can we collectively become more educated on the reality of Latino-U.S. immigration?

Much of Donald Trump’s anti-immigration rhetoric has identified the problem as one of national security, heavily implying that these specific members of our society pose a threat to the rest. He has amplified stereotypical images of Latinos (and especially Mexicans) as uneducated, violent, and heavily involved in gangs. By doing so, he has associated many Americans’ greatest fears—economic decline, violence, and the erosion of cultural values—with a seemingly never-ending influx of Hispanic immigrants (Yakushko).

This kind of rhetoric, especially coming from a respected elite who largely encompasses the ideal image of the American dream, has the effect of intensifying negative stereotypes, greatly exaggerating their validity, and fostering an environment of resentment. And so, although the number of Mexican immigrants has actually declined over the past decade, those who listen to the sitting president’s speeches are inclined to believe that Latino immigrants are, as Trump says, ‘pouring across the border’, and are as great a threat as ever to American society.

Similarly, due in part to conservative anti-immigration rhetoric, many Americans hold the perception that most, or all, Latinos are immigrants—when the reality is that around 2/3 of Hispanics in the U.S. were actually born here. Many conservative Americans also believe that large proportions of Latino immigrants are involved with crime and are bringing their illicit activities to the U.S., when the overwhelming majority of these immigrants have no criminal record and are migrating to the U.S. to escape from often heinous conditions in their home countries (Center for Public Integrity).

The impact of the current administration’s anti-immigrant stance is extensive, and is palpable in the daily interactions of many Spanish-speakers in the U.S. whether they are actually immigrants, or whether they are actually ‘legal’, or not. This can be seen in recent increases in the number of Latino immigrants who have fallen victim to hate crimes and racially-charged aggressions, and in the declining number of Latinos willing to even report such hate crimes due to fear of making themselves more of a target (Center for Public Integrity).

There are various theories for what exactly it is about Latinos that makes them such a target for animosity from anti-immigrant enthusiasts. After all, this sort of rhetoric and treatment of immigrants based solely on their origin is precisely the definition of xenophobia, which can be a dangerous ingredient in any democracy.

Some scientists and psychologists have attempted to explain xenophobia by understanding its roots in human nature and psychology. According to such studies, xenophobia—the dislike or fear of people from other countries or backgrounds—is often linked to a combination of ethnocentrism and perceived threat (Yakushko). Or, in other words, xenophobic behavior may arise when one (1) holds the attitude that his/her own group or culture is inherently superior to others, and (2) believes that they, or their system, is under threat. In the case of Latino immigrants, ethnocentrism is often paired with a perceived threat of things such as unemployment or gang violence—things which are stereotypically associated with Latinos—to cause people to believe that Latinos are the threat.

It is worth noting that those who hold xenophobic or ethnocentric beliefs are not inherently bad people, and they don’t necessarily have malicious intentions. For many who were raised in the United States (myself included), we are taught from a Western perspective to understand that we are culturally, ideologically, and often ethnically superior to those who appear or act differently from us. It is not unnatural or evil to evade things and people that are unfamiliar to us; however, this tendency becomes problematic when we find ourselves focusing too much on stereotypes and perceived differences that alienate other groups, and not enough on the similarities that we share with those who look, or act, or speak a little bit differently.

Some have also associated the rise of xenophobic anti-immigration rhetoric with recent studies that suggest that, as early as 2043, the U.S. may become a minority-majority nation (EFE). This study, based on data from the 2010 U.S. Census, implies that as immigration from Asia and Latin America increases, and as fertility rates among Caucasian citizens decreases, white Americans will no longer hold a majority status in the U.S.

This notion has led to anxiety among white Americans, who have enjoyed the comfort of racial hegemony in the United States for centuries. Studies have shown that large portions of white Americans, Democrats and Republicans alike, express anxiousness and/or anger at the idea of a white minority in the U.S. (New York Times). Some associate this prediction with the dilution of American nationality, or with an increasingly confusing definition of what it means to be ‘white’.

However, the idea of America as a majority-minority nation is a natural reality of the multiethnic society, or ‘melting pot’, that the United States claims to be.

The United States taking an aggressive stance against immigration is not new, and is certainly not unique to Donald Trump. Past presidents have used the same tactics to portray a certain immigrant group as a threat in efforts to alienate and exclude them from our society. And it is not just Latino immigrants that have been victimized by these strategies. In the late 1800s and early 1900s, American leaders banned Chinese nationals from gaining citizenship in the country.

During the Second World War, President Roosevelt sent 100,000 Japanese Americans into prison camps without any charges (Al Jazeera). In early American history, Italian, Greek, Syrian, and Jewish immigrants were targeted. In all of these cases, U.S. leaders used existing stereotypes to single out immigrants of a specific origin and portray them in some way as a threat to the American system.

These cases show that xenophobia and anti-immigrant rhetoric is nothing new to the United States, and is not unique to the sitting administration. However, it is important to recognize that his ascent to the presidency has inspired a new movement of antagonistic behavior and beliefs towards Latinos and Spanish-speaking immigrants. Since he became president, his rhetoric has misled Americans to believe in exaggerated stereotypes and numbers of immigrants coming into the country, inciting widespread support for questionable policies. In the context of today’s anti-immigration debate, it is necessary that we take a step back to understand some of the roots of our anti-immigrant beliefs, and to learn from our past mistakes of denying entire groups of people based in racially-charged presumptions of who they are.