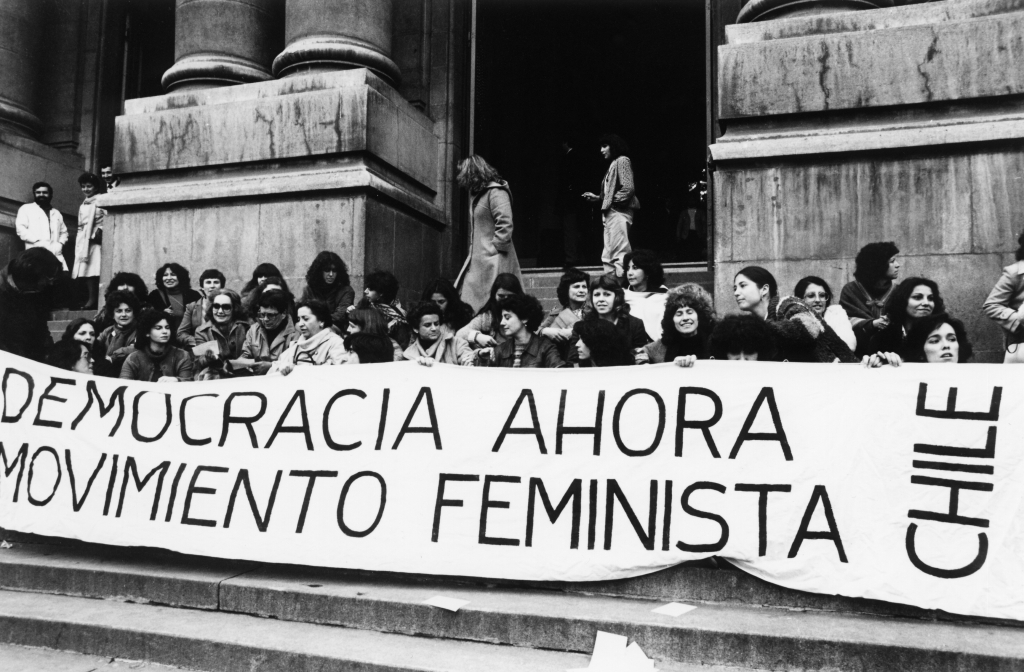 In her first presidential speech in 2005, Michelle Bachelet remarked, “Who would have said…15 years ago that a woman would be elected president?”1 Yet many countries, such as the United States, have not been able to celebrate the election of a woman as head-of-state. Worldwide, representation of women in politics remains low: as of January 2015, only 22 percent of all national legislators were women. Compared to other regions, Latin America boasts much higher levels of women in politics, and even surpasses Europe: while women make up 24.6 percent of European legislators,2 women make up 25 percent of Latin American legislators.3Political scientists and historians also point out that military dictatorships throughout Latin America from the late ’60s through the ’80s played a role in politicizing women, which led to the formation of women’s organizations that sought to extend human and citizens’ rights, such as the Mothers of the Plaza de Mayo in Argentina. In Chile, there is no doubt Bachelet’s presidential victories represent a move towards gender equality; however Bachelet and other women leaders of Latin America still face gender inequality in politics. Despite the region’s international leadership in political gender equality, Latin America is still not removed from the machismo culture that permeates many parts of the region and stymies the growth of feminism.

“Aggressive masculinity;” “male chauvinism;” “a strong or exaggerated sense of the right to dominate;” all of these definitions point to one word: machismo. The definitions vary, but they all converge around the idea that masculinity dominates femininity. (Some scholars believe that these negative definitions of machismo are too limited in scope. I leave that for a separate discussion. For now we will focus on the “traditional machismo” as defined by G. Miguel Arciniega, Thomas C. Anderson, Zoila G. Toavar-Blank, and Terence J.G. Tracey in their study “Toward A Fuller Conception of Machismo.”)4

A term from Mexico, “machismo” consists of the Spanish word “macho,” meaning “male,” and the suffix –ismo, meaning “-ism.” It reflects male power and female subservience. Machismo exists in more spaces than the romantic space; it exists in (some, but not all) businesses, homes, and governments throughout Latin America. In 2006, Bachelet went further than her predecessor Ricardo Lagos in promoting gender and appointed an equal number of men and women to her cabinet. (Many people protested her appointments, commenting that many of the newly appointed women “lacked experience” necessary to do their job. Perhaps this just means women have not been given the same consideration as men when filling governmental positions.)

To help solve the problem of gender inequality, 12 Latin American countries have implemented a form of quota system in order to increase the number of women in government positions. A form of affirmative action, quota systems vary in purpose and power. There are two different types of quotas: a percentage that must be met when presenting candidates for a government position; and a percentage of seats that must be filled by women. Some constitutions (those of Argentina, Colombia, Ecuador, and Nicaragua) mention equality of men and women; Argentina, Colombia, and Ecuador have all implemented a quota system, but the minimum quota in each country is 30 percent––in other words, not even close to equal.

Quotas based on candidacy can be less impactful: Even if the minimum quotas were raised, the quota would not necessarily translate to 30% of government officials. As long as women are presented as at least 30% of candidates for a position––not matter how far down the list––the quota will be “filled.” As Mexican sociologist Jacqueline Peschard explains, “Experience shows that the provision can be respected without respecting its spirit, since women are placed at the bottom of lists of principal candidates, or as alternates, where they have little if any possibility of getting elected…If there is no express provision for nominating women candidates, the objective of having quotas tends to get diluted, as it is left either in the hands of the political party leaders, who for the most part are men, or the voting public.”5

Despite this, the fact that 16 Latin American countries have implemented gender quotas has undeniably helped raise the number of women in elected positions throughout the region. Before the appearance of quotas in Latin America, barely 9 percent of their legislatures were made up of women. In 1991, Argentina was the first to implement quota laws.3 As of 2014, six of the 16 countries have mandated minimum requirements for female legislative candidates.3

Another important point that Peschard brings to the forefront (and what can inhibit the effectiveness of quotas) is the function of party politics: in order for a woman to gain political momentum, she must work within political parties and develop a political support system. Men still make up more than half of politicians in Latin America, including high-level party officials; so unless party leaders are willing to include women and women’s agendas in their party’s platform, it remains difficult for female politicians to gain traction.

From varyingly-effective quota laws to women politicians limited by party politics to the cultural influence of machismo, the position of women in Latin American politics is anything but black and white. While the region leads in representation of women in politics, more work needs to be done to even the gender playing field.