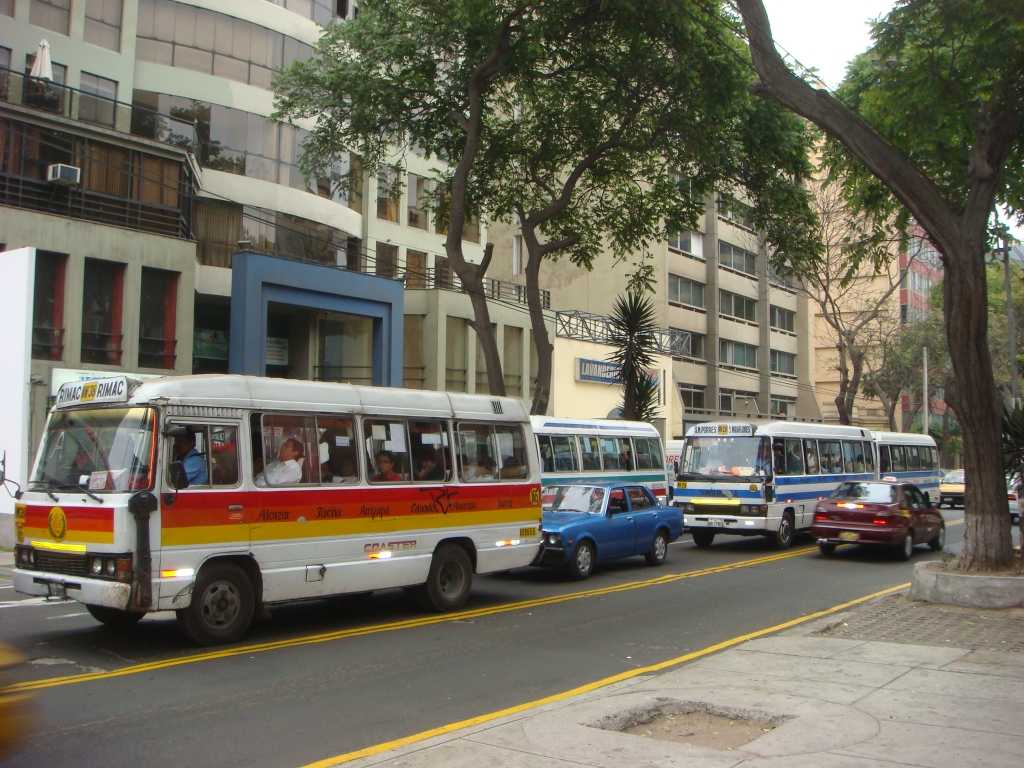 When I first arrived in Lima, one of the aspects of living in this hectic city that most frightened me was attempting to navigate the seemingly convoluted public transportation system. After a few days here, I quickly learned the correct terminology for each possible carro (vehicle) that could take me to my destination.

Perhaps the most abundant form of vehicles, combis describe the multicolored vans that whip around the city. These vehicles have the names of their destinations neatly hand-painted on their sides and cobradores (collectors) hanging out the windows yelling the names of their routes at passerby. The microbuses are small buses, slightly larger than combis and occasionally sans collectors. I also heard a few refer to the Metropolitano, (which are most often named according to their color, for example the corredor azul) and are the only buses that seem to follow the rules of the road. After I realized that the best way to get to know the city is to get lost in it, I fearlessly began riding the buses and vans every day. As I adjusted to taking public transportation around the city, I quickly adjusted to the chaos of the limeño streets.

The eclectic mix of public transportation that one encounters in Lima seems to be a palimpsest reflecting the current changes that are occurring throughout the city. As Lima attempts to reform its public transportation system, combis are vanishing from their past routes and shiny new Metropolitanos are taking their place. While one used to be able to flag down a car at any point in traffic, Peruvians now must wait at designated paraderos (bus stops) for their buses. What the government has been advertising as a "modernizing" move into the future has been generating complaints among many locals.

As an American living in Lima, I have come to appreciate the slight disorganization of the public transportation here, finding it a refreshing change in comparison to the stringently organized bus systems in the United States. Those who have been living here all their lives, however, do not experience the same novelty factors that I do.

The combis and micros that populate the city streets have many disadvantages. Primarily, they create a large amount of pollution; not only do the fumes emitted from the vehicles pollute the air, but they also throw litter into the streets. Noise pollution from horns and shouting cobradores can be heard from many buildings throughout the city. Additionally, many of the smaller cars ignore traffic laws, stopping where and when they please therefore creating traffic jams, accidents, and potential danger for other drivers and pedestrians. As a result, many people have been glad to notice the gradual disappearance of combis.

The Metropolitano buses are larger, cleaner vehicles, similar to the type of buses that one might find in most American cities. These new buses are the product of recent transportation reforms that have been implemented by mayor Susana Villarán. As any new system, however, the Metropolitano has also received many complaints.

These new buses make fewer stops, and refuse to let passengers off or on anywhere other than at a designated stop. Although the city has attempted to eliminate possible confusion by placing informational posters at bus stops, a lack of clear differentiation among the bus routes does little to help new passengers. With the absence of collectors on the Metropolitano, passengers must now memorize the bus numbers and routes. Since the majority of existing public transportation does not operate in this manner, many Peruvians are not accustomed to the new system.

Additionally, authorities organize the passengers into a single line at each stop, which causes long waits and makes little sense once multiple buses with different destinations arrive at the stop. This system is also more expensive than past bus fares. Due to the fact that the new routes interfere with old ones, many city dwellers must now take multiple carros instead of one single vehicle, increasing travel time and costs.

Although these statistics seem to show some support to the reforms to improve the bus system, 43% of those surveyed think that the transport in Lima has worsened.1

In a debate published by the newspaper El Comercio, Alberto Valenzuela and Augusto Rey argue in favor of and against the new system. Valenzuela, limeño councilman of the Popular Christian Party (PPC) claims that the new system only continues to promote chaos rather than eliminate it.2Others who argue against this viewpoint, such as the candidate for deputy mayor of neighbor dialogue Augusto Rey, defend the reform as a long, difficult process. As Rey states, “the transportation system is improving each day... it has constructed the foundation for a new Lima”.2

Tensions surrounding the system have continued to grow as the municipal elections of tomorrow draw near. The current mayor of Lima, Susana Villarán faces criticism for her reform measures. According to recent opinion polls issued by CPI, GfK, and Iposos, the leading opposing candidate, Luis Castañeda currently holds a 40% advantage over Villarán.3 Castañeda, the ex-mayor of Lima, has been accused of falsifying information on his resume as well as stealing money from the city. In a recent speech, Villarán stated that in her four years as mayor, she has completed "double the construction that the previous mayor had in eight years."4 She concluded this speech by stating, "Lima's money is for the limeños and limeñas. Dare to mark number 1, which means double the construction, in half the time, without stealing a sol."4

As reforms are executed, controversy over the new system and its implementation is sure to continue. Perhaps in the future, however, Lima may be able to say goodbye to its old, chaotic system and welcome the changes of the transportation reform.