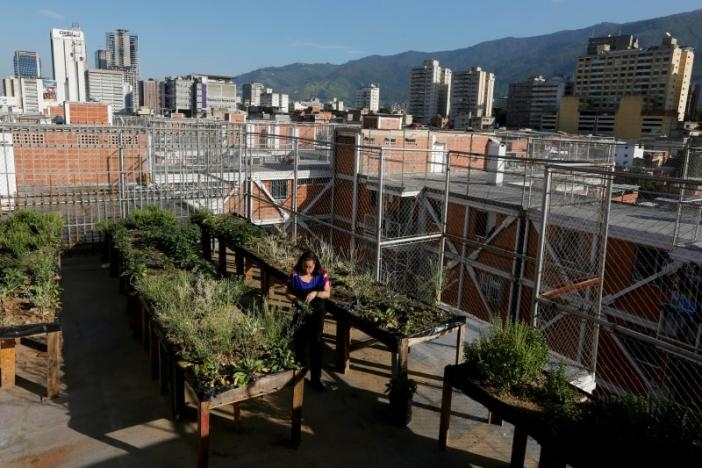 As the world’s population continues to grow exponentially, areas are increasingly becoming more urbanized and crowded. In 1950, 50 percent of the Latin American 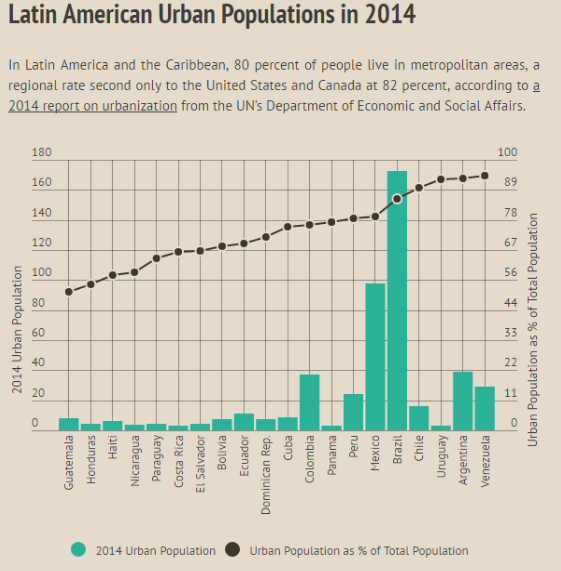 and Caribbean population was living in urban settings. In 1990 it was 70 percent, and by 2014 it had grown to 80 percent1. “It is expected that by 2020, 85% of the poor in Latin America, and about 40-45% of the poor in Africa and Asia will be concentrated in towns and cities2.” The rapid urbanization in the region has led to many challenges such as designing sustainable urban plans that provide water and sanitation services to residents, creating equitable housing, combating urban poverty, and addressing food insecurity.

Food insecurity is more prevalent than ever in Latin American cities, where residents often do not have the means to access fresh, nutritious foods at reasonable prices. This is  a particular concern in places like Venezuela, where there is a national food shortage and the government is unable to import enough food for its citizens. One way that countries in Latin America are learning to combat issues involving food insecurity in cities is through urban agriculture. Many urban residents are taking the situation into their own hands and coming out with rewarding results that provide more economic opportunity and fresh food for their communities.

Venezuelan President Nicolás Maduro presented the  “Great Agro-Venezuela Mission" in early February of 2016--promoting city farming to offset shortages which have led to lootings and riots as the OPEC country undergoes a major economic crisis. The president asked Venezuelan citizens to grow produce anywhere possible, including schools, rooftops, and even jails. As a result of the plan, 135,000 Venezuelans have produced 273 tons of vegetables, fruits and herbs in urban settings3. However, the plan has been criticized for not providing land to grow produce. Rather, the expectation is that all people have access to space to plant food. Critics have asked if it even makes sense for small plots of land to be used in urban areas when Venezuela has plenty of open, fertile farmland as a resource outside of the cities.

In informal housing areas like the favelas in Brazil, the crowded space has made it difficult for residents to access fresh food. Some have seen positive changes after implementing community gardens. One example is the Tijuca favelas north of Rio de Janeiro, specifically a favela named Formiga, which was once an area with high gang rates and was “pacified” through military involvement in the area. In 20084 it initiated a community food garden, which has provided employment for “the unemployed, retirees, ex-offenders, and individuals who have had previous involvement with drug trafficking.4” Not only does it present economic opportunities for those in the community, but it also provides professional skills training, close access to fresh foods, educational programs for youth, and also has reduced the amount of trash dumping on unused land. The Formiga community garden is just one of five in the Tijuca favelas implemented by the Municipal Department for the Environment’s Hortas Cariocas program. Gardens like those in the Tijuca favelas have popped up in other favelas in Brazil like Babilônia/Chapéu Mangueira and Manguinhos. While food insecurity is just one of the issues in the favelas listed above, violence and the lack of sewage services are some of the other challenges that residents still face.  Additional potential obstacles to urban farming include obtaining land rights, finding clean water courses, and implementing a sustainable plan for the gardens.

Venezuela and Brazil are not the only nations in Latin America and the Caribbean that are taking initiatives in urban agriculture: Mexico, Peru, Cuba, Bolivia and Ecuador have been especially active. There is still a lot of potential for growth in the field of urban agriculture as more cities in Latin America continue to increase in size. With all that goes into urban planning, it is difficult to decide where to put relief efforts, yet if national and municipal government policies promote urban agriculture and work alongside community leaders and organizations, there could be a lot of potential for employment, decrease in crime rates, increase in food access, and economic prosperity.