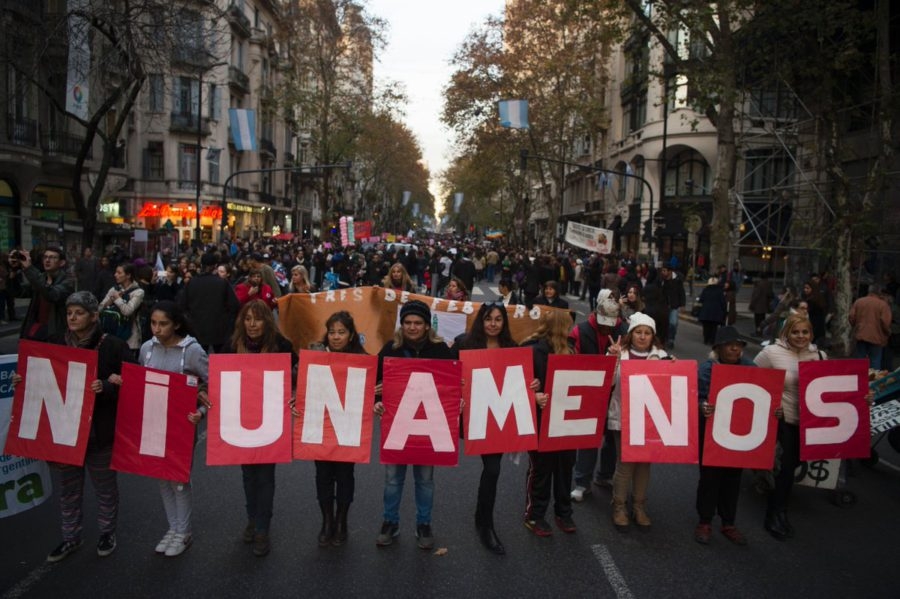 Recent events in countries like Argentina, Brazil, and Venezuela highlight the extent to which social protest often serves as a vital form of political voice in contemporary Latin America. Though certainly protest is not new in the region, and enjoys a long and storied history throughout the American continent, a growing body of evidence suggests that rates of contentious participation have spiked in many countries over the past decade (e.g., Boulding 2014; LAPOP 2008-2012). At the same time, in other countries like Chile, Costa Rica, and El Salvador, levels of protest remain comparatively low, falling below even those found in the U.S. (LAPOP 2008-2012; Figure 1). What is driving surging rates of protest activity in many Latin American regimes? Further, how do we explain such significant variation in contentious participation within a region often mischaracterized as being somewhat homogenous on political, economic, and cultural variables? 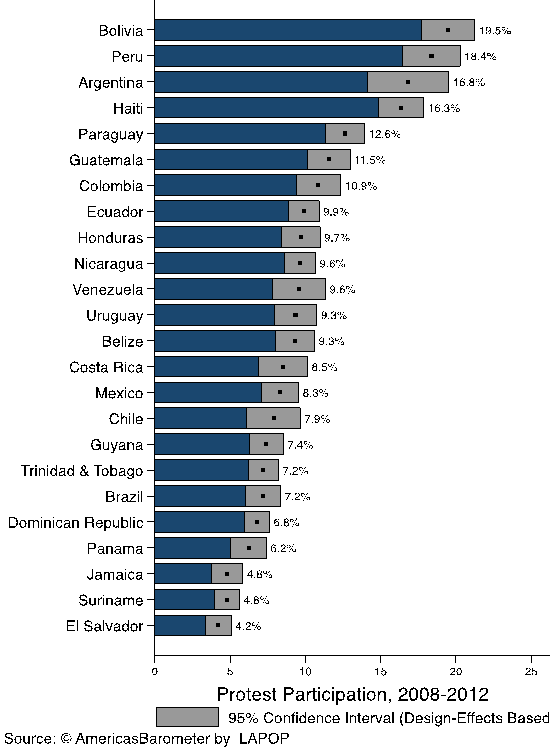 In “Contentious Engagement: Understanding Protest Participation in Latin American Democracies” (Journal of Politics in Latin America 2015 (3): p. 3-48), I argue that the roots of heightened contention lie in trends related to civic engagement and institutional development throughout the region. Specifically, I focus on the interaction between individuals’ membership in community organizations and the extent to which regime institutions fulfill the “democratic promise of representation.” Where high levels of civic engagement combine with low quality political institutions, protest can crystallize as an everyday form of participation, utilized by civic-minded citizens regardless of the nature of their grievances in an effort to influence institutions that fail to adequately respond to their demands.

The rise of civic engagement in Latin America has coincided with impressive economic growth in the first decade of the twenty-first century. From 2003 to 2007, the region experienced an average GDP growth rate of more than 6 percent, marking the most successful five-year period of economic expansion in the post-war era (Ocampo 2008). This export-led progress has paid dividends in the form of a rapidly declining poverty rate and increased access to education in many countries (World Bank 2013). Coupled with surging rates of social media activity (Valenzuela, Arriagada, and Scherman 2012), more Latin Americans than ever are now active in civic organizations, providing an unprecedented foundation for potential collective action. In short, the source of increased civic engagement might lie in part in the improvement of economic conditions throughout the region, which has given rise to a legion of increasingly connected Latin American citizens who have more access to the organizational resources necessary to foment protest activity than ever before (e.g., McCarthy and Zald 1977).

On the other hand, a growing body of literature in political science has documented the extent to which many Latin American democracies have fallen short in constructing strong, high quality political institutions (e.g., Altman and Pérez-Liñan 2002; Diamond and Morlino 2004; Levitsky and Murillo 2009). These problems include rampant clientelism and corruption, susceptibility to strong executives intent on shaping the rules of the game to their advantage, and poor public service provision, among other factors. Shortcomings in terms of the strength and quality of political institutions manifest in public opinion, as a sizeable chunk of citizens in many Latin American regimes lack faith in core political institutions and render negative evaluations of the quality of public services (LAPOP 2008-2014). Yet in other countries, like Chile, Costa Rica, and Uruguay, citizens report far more positive views of the national regime. 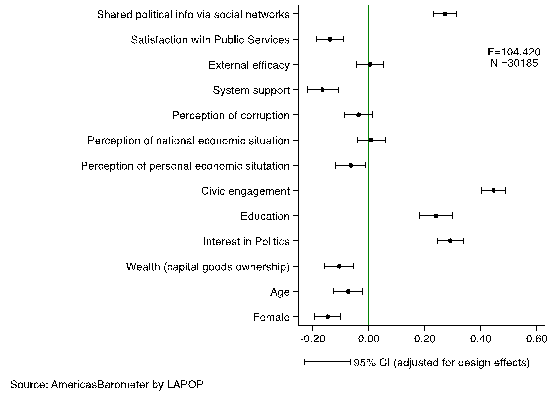 Utilizing survey data from the AmericasBarometer regional survey of Latin America (2008-2012), and the World Bank’s Worldwide Governance Indicators (WGI), I test and find compelling evidence for this interactive theory of protest. On average, individuals who are active in their communities, share political information via social networks, and possess higher levels of education are more likely to have participated in a street march or demonstration in the previous year (Figure 2). However, this is only part of the story, as I also find that these effects are most pronounced in regimes characterized by lower levels of institutional quality, as measured by the WGI. In other words, whereas civic involvement is strongly correlated with protest participation in regimes characterized by low quality institutions (e.g., Peru or Venezuela), it is a much less potent predictor of having demonstrated in countries with high WGI scores (e.g., Chile or Costa Rica). It thus seems that alone, neither civic engagement nor institutional quality fully explain shifting patterns in contentious behavior—rather, only when taken together do we obtain a more complete picture of why rates of protest participation differ across Latin American regimes.

The theoretical framework and supporting evidence presented here suggest we should move beyond grievance-based explanations of contention, and focus more on how organized individuals interact with the political regimes they inhabit (for similar perspectives, see Boulding 2014; Machado et al. 2011). This study also sheds light on, and might even begin to explain, several recent episodes of protest in Latin America. For example, over the past year women’s groups have joined with students and political parties in Argentina to organize demonstrations against femicides and other gender-related violence, creating a movement dubbed Ni Una Menos. A recent article in The Economist noted that while clearly recent violence against women in the country represented an alarming trend, Argentina continues to rank as one of the safest countries for women in Latin America, and women are murdered at a lower rate there than even in the U.S. What has allowed the Ni Una Menos movement to emerge and flourish in Argentina as opposed to other Latin American countries is a dense network of civil society organizations, operating within a political system that has been largely unresponsive to women’s demands.

Social protest can be a crucial tool for democratic representation and political change. In Latin America, is seems to be the outgrowth of two somewhat conflicting processes: the deepening of civil society organization and political activism on the one hand, and the continued malfunction of key regime institutions on the other. What remains to be seen is how Latin American governments respond to heightened mobilization. There are some reasons for optimism, as seen in recent proposed reforms by both the Kirchner and Macri governments in Argentina in response to the Ni Una Menos movement’s persuasive activism. Yet other recent episodes of contention have resulted in what on the surface appear to be less desirable democratic outcomes—e.g., the impeachment of Dilma Rousseff in Brazil. In either case, it seems clear that never before have so many Latin Americans been engaged in democratic politics—it is time that the institutions that represent them reflect that investment.

Valenzuela, Sebastián, Arturo Arriagada, and Andrés Scherman (2012), The Social Media Basis of Youth Protest Behavior: The Case of Chile, in: Journal of Communication, 62, 299–314.

Mason Moseley
Mason Moseley received his Ph.D. in Political Science from Vanderbilt University in 2014, and his undergraduate degree from UNC-Chapel Hill in 2008. Previously, he was the 2014-2015 Postdoctoral Fellow at the University of Pennsylvania’s Program on Democracy, Citizenship and Constitutionalism. His research examines comparative political behavior, and particularly how institutional characteristics and processes shape individual level political attitudes and participation in the Latin American context. His work has been published in Electoral Studies and the Journal of Politics, and has been funded by a grant from the National Science Foundation. He is currently working on a book manuscript entitled “Contentious Democracy: The Rise of the Protest State in Latin America,” which explores the institutional and socioeconomic roots of swelling rates of protest throughout the region. At WVU, Professor Moseley teaches undergraduate courses on comparative politics, Latin American politics, and contentious politics, and a graduate course on comparative political behavior.