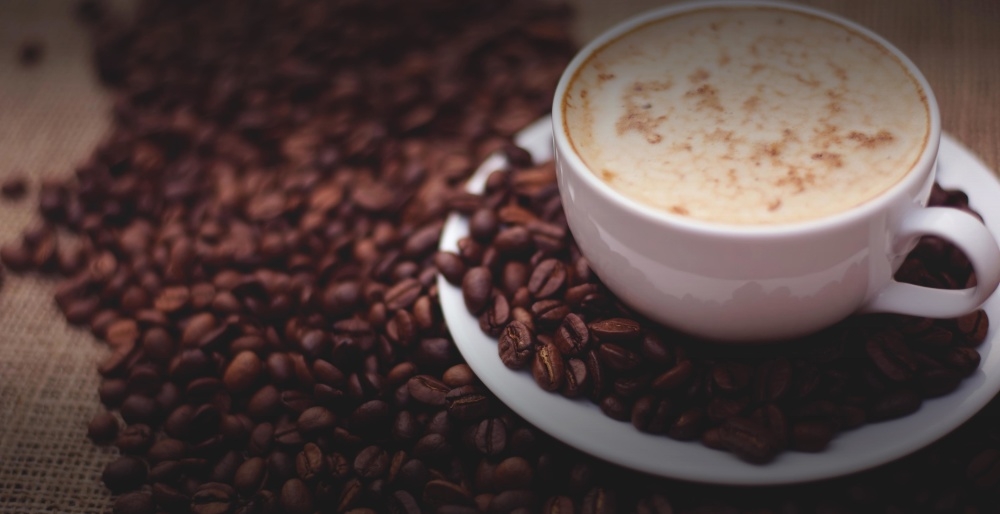 Since the introduction of coffee as a staple in morning routines worldwide, it has become one of the most traded commodities on the planet; in fact, it was second only to oil this year (teleSUR 2018).  The sudden demand for coffee helped to launch Latin America into the industrial age, with countries like Brazil and Costa Rica (which now leads world coffee production at around 45 million 60 kilogram bags per year) setting prices and international standards for the industry.  As the graph below from Financial Times shows, Latin American countries lead in coffee production, with all but two of the top ten coffee producers coming from the area. With demand at an estimated 2.25 billion cups each day and growing, the coffee industry seems poised to enjoy at least another century of success (Fleischner 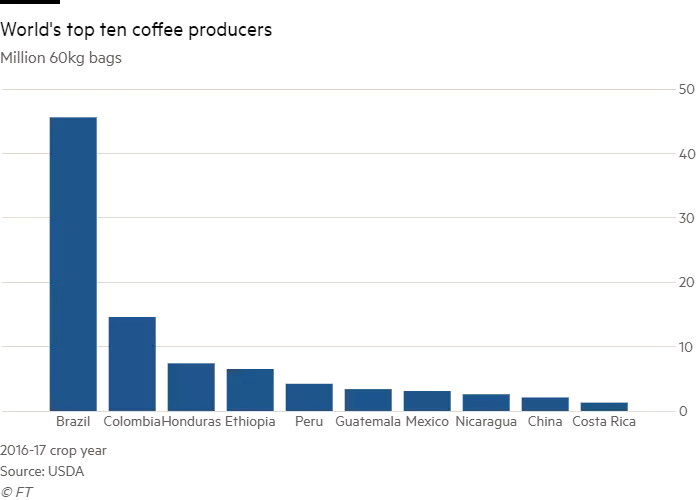 Enter coffee rust disease, an orange-powdery fungus known in the scientific community as Hemileia vastatrix, that turns healthy coffee leaves to yellow before choking off nutrients to the rest of the plant.

The disease has reportedly hit about 70 percent of Arabica plant farms, which has cost the region $3.2 billion USD in damages and stripped 1.7 million people from their jobs.  If left unchecked, the disease could devastate the entire Arabica coffee industry in Latin America, and although researchers have frantically been searching for a remedy, solutions are limited.  Benoît Bertrand, who is a coffee geneticist at an agricultural research center in France, warned that the fungus is evolving and will most likely mutate to render resistant strains that may be developed useless within a few years (teleSUR 2018).

This would not be the first time that coffee rust disease demolished a coffee-producing giant, either.  Sri Lanka, which was previously known as Ceylon, was one of the world’s leaders in coffee production in 1869.  Reports from 1870 (the time coffee rust disease first presented in the area) showed the country’s exports yielding some 118 million pounds of coffee.  About fifteen years later, 90 percent of the land used for coffee growing had been abandoned, and exports had dropped by 80 percent, effectively clearing the crop from the island.  Although the rust was first prevalent in Asia, after having spread to Africa it was quick to reach Latin America. The first known case was reported in Brazil in 1970 (Koehler 2018).

If growers are unable to recover, Latin America’s coffee market may face the same demise as Sri Lanka’s.  While the region currently leads worldwide production, Asia and Oceania have been consistently expanding their growing practices to prepare for the top spot.  Between 2016 and 2017 alone the group increased coffee production by 10.3 percent, jumping from 44,290 thousand 60-kg bags to 48,848 60-kg bags per year. In 2017, South America led Asia and Oceania by just around 30,000 bags, a gap that could be quickly closed if coffee rust affects Latin America as expected (International Coffee Organization 2018).

Coffee rust is not the only worry Latin American coffee producers have; it is, rather, one of the side effects of a much larger plight: climate change.  Coffee Arabica, the species of coffee that constitutes more than 70 percent of global coffee production, is most able to grow in the “Bean Belt,” which encaptures 70 countries between the Tropics of Cancer and Capricorn.  The countries in this belt, many of which are in Latin America, are best suited to grow coffee because of the requirements for proper Arabica growth, like temperatures between 18 and 21 degrees Celsius, particular precipitation, and combinations of shade and sunlight.  Temperatures above 23 degrees Celsius can destroy the crop (Fleischner 2016).

The results of rising temperatures have already begun to play out across Latin America.  Since 1980, rainfall in Mexico, Guatemala and Honduras - which produce more than a combined 10 million 60kg bags of coffee - has decreased by 15 percent.  In the same time period, temperatures have risen by 1 degree Celsius, wreaking havoc on the growing season and creating a breeding ground for coffee rust (Fleischner 2016).

Brazil has had similar circumstances, troubling farmers who are unable to confidently follow seasonal cues from the past.  Guatemala, Honduras and Nicaragua, which count coffee as one of their leading exports, are included in the top 10 countries damaged by climate change since the 1990s (Fleischner 2016).  Guatemala already lost half of its coffee crop in 2012 owing to coffee leaf rust, with some producers losing 85 percent of their crops. Nicaragua is expected to lose the majority of its coffee zone by 2050 (Fleischner 2016).

The Climate Institute reported that climate change will cut the available land for coffee production in half by 2050, a disheartening prediction for the 8.5 million people reliant on the coffee supply chain in Central America and Mexico (Fleischner 2016).

Smallholder farmers, which contribute to the majority of coffee production in Latin America, are especially affected by these environmental issues, as they are unable to “spread out the loss of income” like larger corporations can.  They also face stricter restrictions in renovating farms or varying crops because new coffee trees take three years to produce cherries (Flandreau 2017).

In response, many producers are moving away from coffee, moving frequently towards rubber plantations, or giving up on farming altogether for opportunities in urban areas (Robson 2015).  A shift, which, if one were to focus only on the macro-level pull of supply and demand, would question.

Right now, demand is outpacing coffee supply, with the International Coffee Organization estimating a seven million bag deficit in 2014.  Demand is steadily increasing at 2.5 percent each year, and it does not seem as if it will slow down (Dangerfield 2017). In fact, young people between the ages of 19 and 34 are actually leading all other generations in coffee consumption (Lewis 2016).

The question, of course, is what can Latin America do to maintain the upper hand in the coffee industry?  One possible solution presents itself in the form of Robusta coffee, which, while more bitter than Arabica, is more resistant to diseases like coffee rust and is able to grow in a larger variety of climates.

While Guatemala has already begun to increase Robusta production, with the country’s coffee association ANACAFE buying 20,000 robusta plantlets from Nestle SA and experimenting with the plant in different areas, other Latin American countries are not as open to the change (Nicholson & Menchu 2018).

Costa Rica declared the farming of Robusta illegal in 1988, and farmers in Honduras have collectively chosen to not grow the plant in order to maintain the quality of coffee the country is known for.  Colombian farmers similarly resisted President Juan Manuel Santos’s proposition to grow robusta in the plains, worried about ruining the strong image of Colombian coffee. However, some small planters in the country, sensing an opportunity, have begun to grow the strain (Nicholson & Menchu 2018).

Of course, switching to Robusta plants is not a perfect solution.  It would still take producers years to receive viable beans from new plants, and consumers would have to readjust their taste buds and accept the change.

However, Robusta production could help prevent Arabica farmers from destroying 2.2 million hectares of rainforest - what environmentalists have predicted will be the amount of land necessary to meet the projected demand for coffee in coming years (Robson 2015).