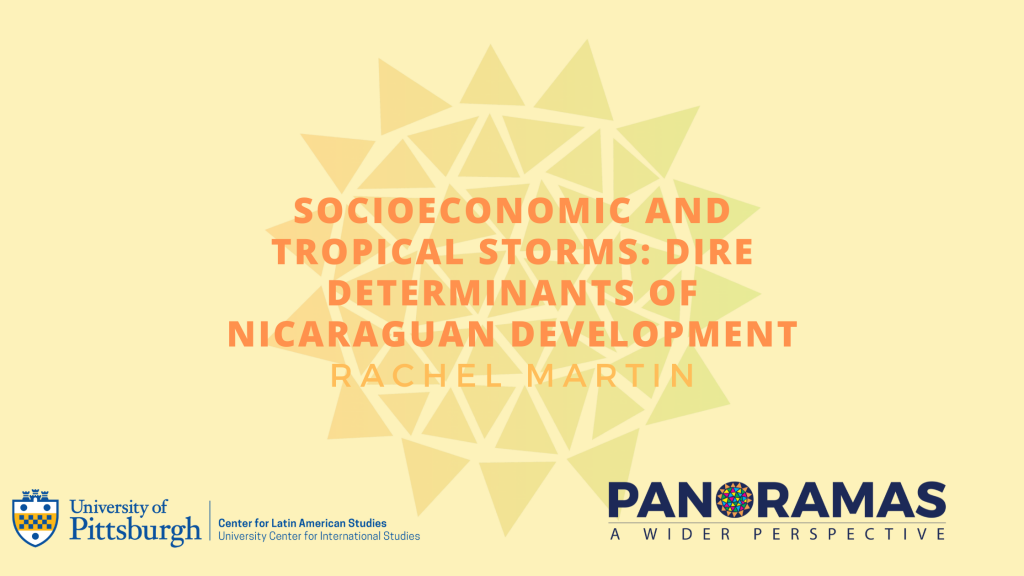 No country can truly prepare for the moment that disaster will strike. In the most volatile of countries, the repercussions of these events will carry further. This is the current reality in Nicaragua. Heading into 2020, political instability and the coronavirus pandemic met to pull the country further into economic decline. These two factors set the stage for the vulnerability that was brought to light following the back-to-back disastrous effects of Hurricanes Eta and Iota that struck in November of 2020. In this paper, I will detail an economic analysis of the events as described within the article “Second Major Hurricane in Two Weeks Slams Central America” from the Wall Street Journal. I will outline weaknesses of the Nicaraguan economy, explain the effects of the hurricane on infrastructure and on GDP, and conclude by discussing how these economic issues can look to be addressed.

It is impossible to comment on the current economic situation in Nicaragua without first considering the historical and political context of a country in turmoil. The history of Nicaragua is rooted in colonization and the influence of larger nations. Spanish colonization led to the spread of infectious disease that led to the death of countless indigenous peoples. The institutions established at this time were rooted in extractive practice and set the basis for the country’s inequality. There is a history of American influence and control including the United States occupation that lasted from 1909 to 1933.1 Sandino was a revolutionary who spoke out against this and would go on to inspire multiple movements in the years to follow. The Somoza dictatorship followed and lasted for the majority of the twentieth century, in turn followed by the Sandinistas who lost power not long after. More recently in 2018, political conflict broke out as current President Ortega proposed to raise taxes and lower social benefits. This led to the rise of calls for Ortega to step down. President Ortega has met his opposition violently and continues to seek control of the nationwide media, creating a dangerous environment for all opposition. Many have fled the country as a result. This corruption and lack of transparency plays into the economic instability that is a factor of such turbulent political standings.

Nicaragua ranks 122 out of 190 globally in terms of GDP and has been seeing a decline in GDP since protests toward the political situation began in 2018.2 It is important to consider that a large amount of Nicaragua’s economy takes place in the informal sector and cannot be explicitly confirmed through the collection of data regarding official transactions. The UNDP reports Nicaragua’s HDI as .660 as of 2019, placing it at 128 out of 189 countries.3 One of the most important pieces of understanding the economic state of Nicaragua as a whole is its high levels of inequality. The World Bank estimates the Gini coefficient to be around 46.22, which is among the highest in the world. This dire sense of inequality causes further concern for how economic shocks will be handled and felt within the nation, since economic shocks most harshly affect the poor.

In addition to continual issues in inequality, an overdependence on agriculture has been a recurring issue that has not allowed Nicaragua to diversify its economy in the ways that are necessary to sustain growth. It is estimated that 30.7% of the population works in agriculture, and that agriculture makes up 15.4% of its GDP.4 This is among the highest in the region. Agriculture is also hindered due to the unpredictable weather through events such as hurricanes. This makes it difficult to rely so heavily on agricultural exports such as coffee and tobacco.

As examined throughout the text The Economics of Contemporary Latin America, geography is a contributing factor to the poor overall economic performance. Nicaragua is located in the tropics, and thus there is a historically higher prevalence of disease which leads to lower overall labor productivity. Due to its location in the tropics, Nicaragua is also located further from core markets and thus experiences higher transport costs in the exportation of its major goods.5 Above all, the most impactful of these implications of geography is the higher chances of unpredictable and destructive weather.

In the year of unprecedented times, November of 2020 broke records for hurricanes.6 For the first time in recorded history of the region, two category four hurricanes hit the country within 15 miles of one another within two weeks. First was Hurricane Eta that landed on November 3rd with winds of over 120 miles per hour, taking over two hundred lives and causing thousands more to be displaced.7 Two weeks later, it was soon followed by Hurricane Iota, the strongest November hurricane ever recorded. Combined, the damages were immense.

The destructive nature of the hurricanes brings necessary concern for the ability of the country in its production of goods and services and subsequent contributions to GDP. Specifically, the destruction of infrastructure such as roads and hospitals inherently causes a sharp decline in any production as it prevents the transportation necessary in order to produce. Insufficient infrastructure is seen time and again as a limitation in terms of the increase of per capita GDP. The decline in public infrastructure and inability of workers to contribute leads to a further decline overall productivity and performance of the economy.

As a result of these economic crises, the IMF has approved and issued financial assistance of over $180 million dollars.8 The pandemic, hurricanes, and recession due to the political crisis have caused lower revenues nationwide as well as a severe tightening in available financing. These funds will be issued in two different kinds of loans, Rapid Credit Facility (RCF) and Rapid Financing Instrument (RFI). Both of these are offered in emergency situations in order to assist with balance of payments needs, following natural disasters, conflict situations, and other emergencies that result amongst fragilities. According to the IMF, the “financing will be used to accommodate urgently needed health related and social spending.” The stimulus provided from these loans will be a necessary catalyst in propelling the nation’s economy forward. The funding towards health-related spending comes at crucial time following the grave consequences of the hurricanes as well. As noted in the Wall Street Journal article, the Vice President of Nicaragua Rosario Murillo explained that as a result of Hurricane Iota, “the roof of an improvised hospital in Puerto Cabezas had blown off, forcing the evacuation of patients, including four in intensive care and two who had just given birth.”7 In the midst of a pandemic as well as following a natural disaster that caused thousands of injuries, these loans from the IMF are absolutely indispensable in repairing the necessary healthcare infrastructure. Improvements in infrastructure as well as in social capital are at the core of the furthering of development within Nicaragua. These loans can cause a recovery in public infrastructure and public investment as they are to be applied to solving the crisis at hand. If applied effectively, this will result in necessary strides toward financial recovery.

Geography itself cannot be blamed for the unstable position that Nicaragua was in leading up to the hurricanes that struck this past November, as “investments in infrastructure, health, and education could have mitigated unfavorable geography.”4 However, in this case it is safe to safe that such destructive hurricanes would have had a devastating effect on any country. The effects of this, however, are certainly felt more strongly in Nicaragua as the political and coronavirus crises were no help in preparing for such an event.

Regarding the emergency loans for Nicaragua, the Deputy Managing and Acting Chair of the IMF stated that “continued commitment to enhance transparency and ensure the good use of emergency financing remains important.”8 Despite the best intentions of the IMF in distributing these loans, there is reason to suspect that the funds may not necessarily be used in the most effective or transparent way possible. Any misallocations will hinder the potential effects of these loans on growth moving forward. The issues at hand in Nicaragua are multidimensional, and there is no simplistic way to ensure recovery. However, it can be shown that investments in infrastructure and social capital remain crucial in alleviating the hindrances of the coronavirus pandemic and the devastating shocks of hurricanes.

Rachel Martin is a double major between Economics and Industrial Engineering. She loves hiking, exploring, and learning about other cultures. Upon graduation this December she plans to spend time backpacking while working in Data Analytics and hopes to eventually pursue a postgraduate degree in Sustainable Development.