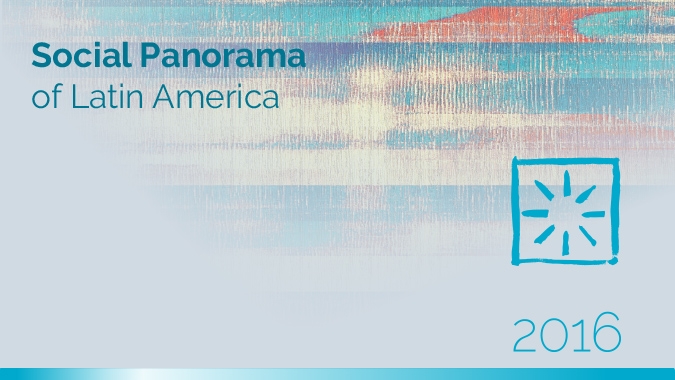 The Economic Commission for Latin America and the Caribbean has released a briefing paper advancing some of the findings of the 2016 “Social Panorama of Latin America,” focused on social inequality from the perspective of the obstacles it presents for the achievement of the goals set in the 2030 Agenda for Sustainable Development.

Regarding levels of inequality in income distribution, ECLAC finds no evidence of significant changes in the regional average between 2014 and 2015. Consideration of the entire period since the 2008 financial crisis shows a reduction in the levels of inequality in the distribution of income. However, the pace of improvement has not been uniform throughout the period -while the average annual reduction of the Gini coefficient between 2008 and 2012 was 1.2%, between 2008 and 2012 it dropped to 0.6% per year. Calculations based on the most recent data result in a 0.469 Gini for the region in 2015.

The report also provides more in-depth analyses, looking at the distribution of income from the perspectives of gender, functional income, and the ownership of physical and financial assets. As for the former, data show that “[w]ithout exception among the countries considered, women are overrepresented in the first two or three income quintiles. In particular, women aged between 20 and 59 are overrepresented in the poorest income quintile by up to 40% compared to men.” Underlying such results is the fact that “women tend to receive lower incomes, as a result of the difficulty of reconciling unpaid work in the home with labor market participation. Moreover, they generally work in typically low-wage occupations and are often overrepresented among the heads of single-parent households.”

Functional disaggregation of income inequalities shows that wages’ share of GDP only increased in five countries out of 13 for which data were available. This suggests that the distributive improvements of the period “were not primarily linked to a more equitable distribution of the returns on capital and on labor.” Variation is important across economic sectors, probably “due to changes in how value added is distributed between labor and capital in the different economic sectors, or to changes in the relative scale of value added among sectors.” Detailed analysis of a sample of eight economies ”reveals shifts in the returns on labor and capital within sectors had stronger effects than changes in the relative size of the different sectors within the economy.”

On average, both central government and public sector social spending in Latin America reached their highest levels in the current century (respectively, 10.5% and 14.5%). Not surprisingly, average levels mask wide variations: while Argentina, Brazil, Colombia and Costa Rica appear at the top of the spectrum with social spending above 20% of GDP, Guatemala and Haiti show at the bottom with less than 8%. Rankings are diverse across the different components of social budgets: while Argentina and Brazil rank at the top of social security spending with more than 13%, Bolivia and Costa Rica are the higher spenders on education (over 7% of GDP); in turn, Argentina and Costa Rica lead in health care (over 6% of GDP). ECLAC experts have made important efforts towards the conceptualization and understanding of inequality in terms of a social inequality matrix structured around the evolution of the life cycle. The basic assumption is that inequality is a multidimensional phenomenon determined by variable interactions of multiple factors operating throughout the life cycle. Each one of these determinants are supposed to be part of different causal configurations and work through different paths at different stages of that cycle. That being the case, we should expect the specific contribution of any variable to the total equation of inequality at a given point in the life of an individual to fluctuate depending on the corresponding stage. “An important part of this approach is that inequality is conceived as the outcome of processes that take place over time, being the cumulative result of decisions, needs, advantages, events and experiences interacting with institutional arrangements and the social and economic context.” This has in turn important methodological implications: “analyzing the relationship between inequality and the life cycle requires drawing a distinction between stratifications over the life cycle, within each of its stages, and between these different stages in different socio-historical contexts. […] Besides inequalities between people at different stages of the life cycle at any given time, there are also large gaps between people at the same stage, particularly in relation to socioeconomic status, gender, ethnic and racial origin and territory.“

The report emphasizes the importance of childhood in general, and early childhood in particular, for the subsequent developmental potential of any individual. In Latin America, “inequality is pervasive from the earliest stages of people’s lives,” poverty in childhood being “particularly critical because of children’s greater dependence, lack of autonomy and vulnerability to the economic and social conditions of their environment and their families. Children are more likely to have unmet needs than people at other stages of the life cycle.” However, we will also find large inequalities within the child population itself “when other axes of social inequality such as socioeconomic status, gender, ethnic and racial origin and territory are considered.” Thus, for example, both access to and the quality of preschool education are usually higher in urban areas than in rural ones. In turn, the legacy of inequalities built during childhood may be reinforced or mitigated by specific combinations of variables during youth. Particularly, “completion of secondary school… not only affects later stages in adolescents’ life cycle but also plays a fundamental role in interrupting the transmission of poverty and inequality to future generations.” In this respect, an important finding is that “the percentage of young people aged 20 to 24 (both male and female) completing secondary education has risen across the region, and this growth has been particularly striking in rural areas, with rates rising from 18.7 % to 38.4% for men and from 20.4% to 42.2% for women. Nevertheless, “[a]t the same time, while the secondary school completion rate among young indigenous people has risen strongly (by about 50% as compared to some 20% for non-indigenous young people), there are still very large ethnicity gaps in this indicator.”

The profound demographic transition currently experienced by the region, characterized by the steady ageing of its population, accentuates the visibility of inequalities among the elderly, mainly associated with “alterations in family living arrangements, access to a stable pension and retirement income and changes in health and in physical and intellectual autonomy.” Once again, differences among sub-populations among old people “reflect the disadvantages (or advantages) they have accumulated over a lifetime.” Educational attainments, for example, “during adolescence and youth substantially affect people’s long-term position in the labor market, which in turn affects access to contributory pensions.” As a result, we find “very large differences in contributory pension eligibility by education level” in spite of the fact that, “generally speaking, the proportion of both men and women aged 65 and over receiving a pension increased modestly in almost all the countries between 2002 and 2014.”

Stage-specific challenges are magnified for indigenous people of all ages. “The inequality characterizing Lain America is manifested in the case of indigenous children and young adults by considerable disadvantages, particularly as regards health and education;” furthermore, this infringement of rights is compounded by interaction with other axes of social inequality (gender, socioeconomic, territorial and age inequalities), resulting in multiple forms of exclusion.” The final chapter explores in depth the specific problematic of Afrodescendent populations, finding that, in the four countries for which comparable data are available , “the Afrodescendent population is more heavily concentrated in quintile I than the non-Afrodescendent population.” Gaps are particularly visible –and consequential- in the areas of education and health care. And once again, sources of inequality intersect with multiplying effects: “Taking into account the intersection of gender and ethno-racial inequalities, it becomes evident that young Afrodescendent women are subjected to at least twice the exclusion that young non-Afrodescendent men are.”

Chapter IV, focused on the distribution of time as an essential component of inequality, is especially interesting from the theoretical and methodological point of view –in first place for the analysis of gender inequality. The authors observe that “the achievement of women’s autonomy depends heavily on the balanced distribution of unpaid domestic and care work between men and women, and between families, the market, the community and the State.” Although availability of comparable time-use surveys is still limited, there is evidence that, while men spend about 10% of their time doing unpaid domestic and care work, women spend on such activities between one fifth and one third of their time.

The document remarks some institutional innovations supporting a moderate optimism. “The corollary of an increased awareness of the need to adopt policy approaches that are sensitive to people’s lifelong needs is the emergence of social institutions devoted to specific population segments such as children and adolescents, young adults and older people. These institutions have spread throughout Latin America and the Caribbean and are anchored in all cases both in international commitments and instruments and in national laws and specialized government agencies.”