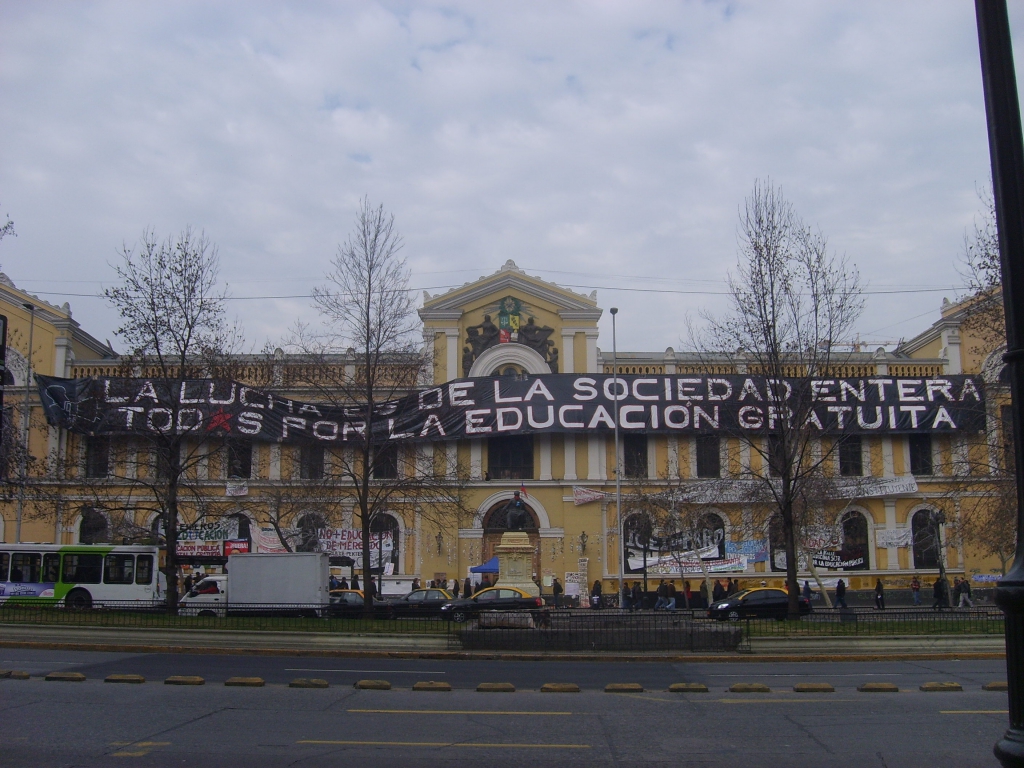 In 2011, Chile was marked by the masses protesting the outrageous tuition rates and extreme levels of student debts. In 2016, the Chilean government responded by enacting a program known as gratuidad—making college free for qualified students. With the goals of reducing student debt, increasing enrollment among lower-income students, and decreasing the inequality entrenched in the education system and its students, gratuidad brought many students hope. Almost four years since its inception, gratuidad can be a useful reference for countries like the U.S., where the transition to a tuition-free higher education system has been considered by students and politicians alike.

Chile’s road to free college began in 2011 when students, teachers, and their allies protested the government and demanded reform to the education system (Taylor 2011). They argued that the government had commodified education through the “marketization” of higher education. Education is a commodity in the sense that universities rely on the high rates of tuition, enrollment, and student debt to operate (Delisle and Bernasconi 2018). Prior to 2011, the total enrollment rate was 27 percent for students in the lowest income decile. However, for students in the top decile, the total enrollment rate was 91 percent (Delisle and Bernasconi 2018). These rates were determined to be a result of the stratospheric tuition rates and debt levels. Activists called upon the government to create policy reforms with the goal of making higher education more accessible to students of all incomes.

In 2013, Michelle Bachelet of Chile’s Socialist Party centered her campaign on making higher education tuition-free for students who come from families in the lower 70 percent of the income distribution by 2018 (Delisle and Bernasconi 2018). Known as gratuidad, Bachelet’s program aimed to make higher-education tuition-free for all students by 2020.  Bachelet won the 2013 election based on this campaign, and her proposed tax revenue program that would fund gratuidad.

Once in office, the promises of her campaign proved to be challenging, as the expected cost of gratuidad was 2.1 trillion Chilean pesos or $3.14 billion (USD) a year. With stagnant economic growth and minimal tax revenue inflows in Chile, the price of free college seemed impossible. Adapting to the current state of the economy, the Bachelet Administration adopted a gratuidad program that would only cost 518 billion Chilean pesos or $810 million (USD) a year (Delisle and Bernasconi 2018).

Gratuidad is a mandatory program for all public universities. The program is also available for adoption by accredited private universities, as well as technical training schools and professional institutes. Due to the costliness of gratuidad, the government placed additional restrictions on the program. One restriction is that the tuition funding is only available to students for the time designated for the completion of academic degrees (ie. four years for a bachelor’s degree).

This restriction is the aspect of the program that frustrates most students. In Chile, 10 to 30 percent of students take more time to complete their degrees than this expected timeline allows (Servicio de Información de Educación Superior 2016). In the U.S., the number of students who graduate in four years is only 40 percent (Digest of Education Statistics 2017). For these students of the lowest income distribution, finding the resources to fund their remaining tuition can seem impossible.

The anticipated outcome of universal education was a distant reality in Chile. The main factors that hinder universal education include that not all universities participate in gratuidad. Additionally, the cutoff of students based on income distribution impedes Chile’s progress towards equal opportunities in education. The result is that gratuidad only impacts a partial percentage of the population. In 2016, only 12 percent of undergraduates received the benefits of gratuidad. This number increased to 22 percent of undergraduates in 2018. However, the reach of gratuidad has proven to be minor considering the total population and the persistently high tuition rates (Delisle and Bernasconi 2018).

Despite the adverse effects of gratuidad, research results from the Chilean Ministry of Education demonstrate that the program has been successful in increasing the enrollment rates of lower income students in higher education. To illustrate, 15 percent of university enrollments in 2016 would not have occurred without the tuition benefits of gratuidad (Delisle and Bernasconi 2018).

Gratuidad additionally runs the risk of decreasing the quality of education at Chilean universities. This side effect of gratuidad will be most evident at the participating private universities who must cut costs due to the loss in finances from participating in this education program (Delisle and Bernasconi 2018).The restraints gratuidad places on funding also risks the integrity and diminishing the quality of all universities.

The Chilean model of tuition-free higher education offers useful insights to countries considering the transition. Policymakers should also remain attentive to additional unintended consequences of gratuidad that are hypothesized to occur. These predicted consequences will negatively impact low-income students—the exact population the program intended to benefit. More data is needed to analyze gratuidad in its entirety. In the following years, the U.S. and other countries looking to pursue tuition-free university should watch closely to see if gratuidad leads to a higher level of enrollment amongst the low-income student population, or if the low-income students are crowded out of the higher education system as a result of an increase in selectivity. As gratuidad has only been active for a few years, it is still possible that the program will result in an increase in degree accessibility and university enrollment.