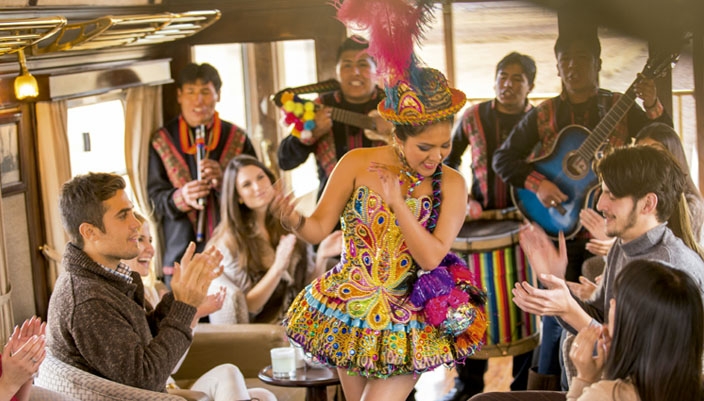 South America’s first sleeper train, The Belmond Andean Explorer in Peru, is scheduled to begin running in May of 2017. The train will take travelers through the highlands of Peru: making stops in Cuzco, Puno, Lake Titicaca, the Colca Canyon and Arequipa1. The luxury hotel, train, and cruise company, Belmond, works around the world in Europe, Asia, Africa, and South America creating itineraries for those seeking a premium class experience.

The sleeper train is set to travel along one of the highest routes on Earth2 , allowing passengers to admire Peru’s beautiful scenery from the comfort of their cabins. The cabins in this train are like no other, there is a reason why they call it a luxury train. Along with comfortable beds and showers in each cabin, guests can also explore the train’s dining, observation, and lounge cars accompanied by comfortable chairs, an open bar, and even a baby grand piano. The interior of the cabins are said to have been designed with the inspiration of Peruvian textiles while incorporating Alpaca wool and hand-crafted local fabrics3. The Belmond Andean Explorer’s dining services will be serving “refined Andean flavors” cooked by skilled chefs using ingredients locally-sourced from the Andes4.

With a maximum of 48 passengers per trip and prices for accommodations starting at $462 per person for one night1, one questions who profits the most from this new venture. While the train will bring more tourists into the country and source all of its dining ingredients locally, its itinerary is designed to feature few interactions with the local culture. Though there are aspects that introduce passengers to the landscape, scenery, and some historical monuments, the majority of the trip is designed with little emphasis on the local culture, cuisine, and people. The prices for the luxury train and its amenities already create a socio-economic divide between those riding the trains and those who live in Peru.

The Andean mountains where the train is scheduled to pass through have some of the highest rates of poverty in the country.  Peru’s national poverty rate is around 50 percent, 20 percent of which is concentrated in predominantly indigenous communities5. There is the possibility of creating new jobs with the new luxury train; however, employees most likely would need to speak English as most of the passengers are expected to be English speaking.

The development of The Belmond Andean Explorer in May 2017 means that Belmond will be expanding its presence in Peru. The company already has four different itineraries to Machu Picchu, trains that run to and from Machu Picchu and Cusco, and luxury hotels in Cusco, Lima, Sacred Valley, and Machu Picchu--all of which are designed to give the customers a high-end experience6.

The past decade in Peru has seen a spike in international arrivals. The amount of international travel “between January in September in 2004 has nearly tripled during the same nine month period in 2015.” In 2014, the tourism sector has contributed 1.2 million jobs in Peru according to the World Travel & Tourism Council (WTTC)7. While there has been an increasing trend of jobs with the spike in tourism, it’s hard to predict how the new luxury train and the expansion of high-end companies like Belmond will affect the existing communities and the overall economy of Peru.