Dollarization: The Case of Ecuador 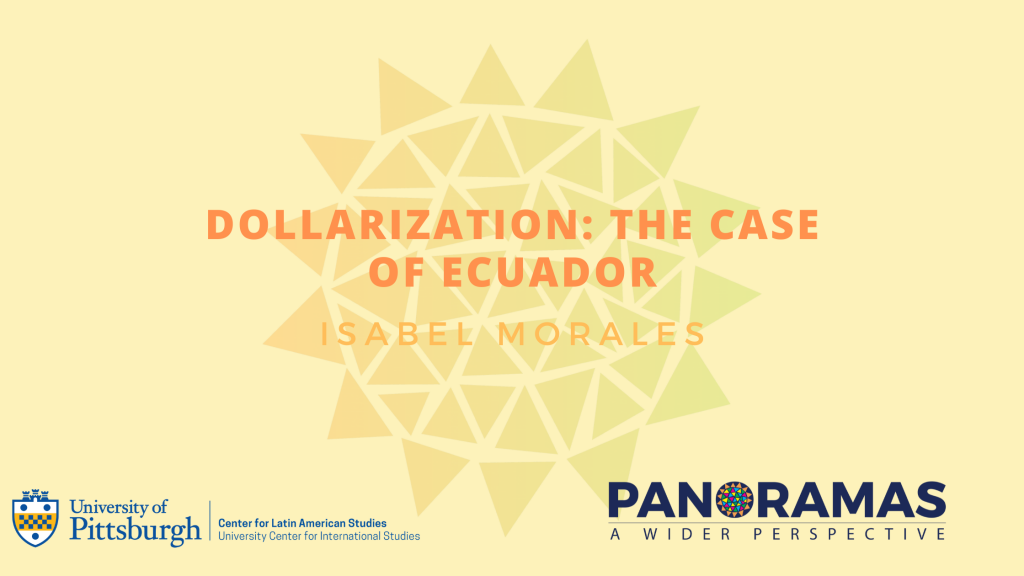 In many instances, dollarization has been presented as an effective cure for a country’s economic problems, but economists recognize that it has both advantages and disadvantages (Dinero, 2020). Dollarization is an economic process that consists of a country legalizing the use of the U.S. dollar as a medium of exchange alongside or in place of its domestic currency (Investopedia, 2019). This became a tempting viable solution for countries in Latin America and the Caribbean that were undergoing periods of economic instability. Yet only three out of the thirty-three countries in the region adopted the dollar as their official currency. These countries are Panama, Ecuador, and El Salvador. To focus on one of these countries, Ecuador is a great example where one can clearly observe the benefits and disadvantages of implementing the dollar.

Since the end of WWII, the U.S. dollar surpassed the British pound as the world’s leading reserve currency. The credibility and strength that the dollar offers, can help stabilize an economy, aiding in both recovery and the promotion of trust that attracts foreign investment. Because Latin America and the Caribbean is a region rich in natural resources and commodities, it is more appealing to use the dollar (TransferWise, 2016). Dollarization promotes a closer economic and financial integration with the United States and the global economy, which can help approach income levels of more advanced economies (Berg & Borensztein, 2000).

In comparison to Panama and El Salvador, Ecuador adopted the dollar as a last resort to save their drifting economy (Cordero, 2020). In the late 1990s, Ecuador was experiencing a severe economic crisis. In addition to a stagnant economy with an average GDP growth rate of only 1.9% per year, there was a high inflation rate averaging 39% per year between 1982 and 1999. While many countries in Latin America, such as Argentina, Bolivia, Brazil, or Peru also suffered periods of high inflation during that time, by the 1990s those countries were able to regulate the rate of inflation. However, inflation in Ecuador remained high in the two-digit range (Cueva & Díaz, 2019). The value of the national currency called the Sucre, fell drastically, putting Ecuador on the brink of economic collapse. In 2000, the government finally decided to substitute its currency with the dollar, and it generated stability—reducing inflation to below 10% (Wang, 2016). Beyond the stabilization of prices, dollarization has brought undoubted benefits to Ecuador. Since then, the country has only suffered negative growth for two years, hyperinflation disappeared, interest rates fell, and investment and productivity rose (Cordero, 2020).

However, dollarization also has its disadvantages. Critics of the decision complain that by adopting the dollar, Ecuador’s politicians and central bankers no longer have the power to carry out their own monetary policy (Reed, 2020). Before dollarization, the government and the Ecuadorian central bank made decisions of foreign exchange rate, interest rates, and purchasing power. Now, the central bank’s power comes to reside with the Federal Reserve in Washington D.C., and the United States does not have to look after the interests of the dollarized country (Cordero, 2020). This new monetary system that was independent from Ecuadorian control was unfamiliar to people, leading to a great deal of criticism and disapproval.

Besides making it difficult for the government to intervene during times of recession, the lack of power of the central bank has unfavorable effects on exports (Wang, 2016). For example, a weak domestic currency stimulates exports, but a strong domestic currency makes a country’s exports less competitive in the international market. Therefore, if the U.S. dollar increases in value, it can make exports less competitive in the international market. This can be a problem because countries in Latin America depend on the exportation of natural resources for economic growth (Wang, 2016). In fact, 52% of Ecuador’s export value came from petroleum. Since then, oil prices have fallen significantly, which significantly impacted Ecuador’s economy.

Though, for many Ecuadorians, the lack of power of the central bank is not a problem. Some people see dollarization not just as a monetary policy tool, but as an institutional feature as well. For example, many Ecuadorians are worried about what a populist leader could do to the economy if they had the power of controlling the central bank. According to Nicolás Cachanosky, an assistant professor of Economics at the Metropolitan State University of Denver, those who criticize dollarization claim that it prevents a country from managing foreign shocks. Yet, these people presuppose that the central bank will manage such shocks effectively and appropriately (Cachanosky, 2020). But, even if they do, foreign shocks are not the only issue, because domestic shocks also exist. Dollarization largely eliminates those domestic shocks like inflation, that could otherwise come from politicizing monetary policy if the central bank had control (Cachanosky, 2020).

Other negative effects of dollarization relate to the cost to society. Many Ecuadorians are satisfied with the adoption of the dollar, but others are severely affected by this decision. In a way, dollarization distorts systems of internal prices, making countries more expensive. So, inequality is aggravated because consumer goods become too expensive and inaccessible for most people (Dinero, 2020). Additionally, due to cheaper prices in neighboring countries, Ecuadorians stop supporting national production. Thousands of Ecuadorians cross the border into Colombia to go shopping for goods that are significantly cheaper. For example, a 50-inch TV costs about $1,300 USD in Ecuador, but less than $800 USD in Colombia. The situation became of such concern that in 2015, President Rafael Correa issued a “call of conscience” to Ecuadorians, asking them to support national production by buying Ecuadorian products (Wang, 2016).

Even though dollarization has proven to be relatively successful in Ecuador, it is not always ideal to implement in other Latin American countries. Currently, there is a recurrent debate over whether Argentina should officially adopt the U.S. dollar to achieve price stability and lay the groundwork for economic growth. Yet, twenty years of data from Ecuador suggest that dollarization is a quick fix but does not address the underlying problems that hold countries back in relation to economic and political policies (Jácome, 2020). Considering Latin America’s history with economic instability, many countries would have adopted dollarization if it were the key for a strong economy. But the case of Ecuador, and the other two dollarized countries in the region reflect that the effects can vary depending on a variety of factors (Dinero, 2020). Therefore, the solution for one country does not necessarily mean it will work for another.

Isabel Morales is an international student and a sophomore at the University of Pittsburgh. She born in Pereira, Colombia, but has moved around throughout her life living in places such as the U.S., Colombia, and Israel. She is currently pursuing a B.A. in Economics with a minor in French, along with a certificate in Latin American Studies. Through her experiences living in different countries and the numerous opportunities given at Pitt, she has become greatly interested in Latin America and its culture.

TransferWise. (2016, December 7). Dollarization: Why so many countries use the US dollar. https://transferwise.com/us/blog/dollarization-why-so-many-countries-use-the-us-dollar