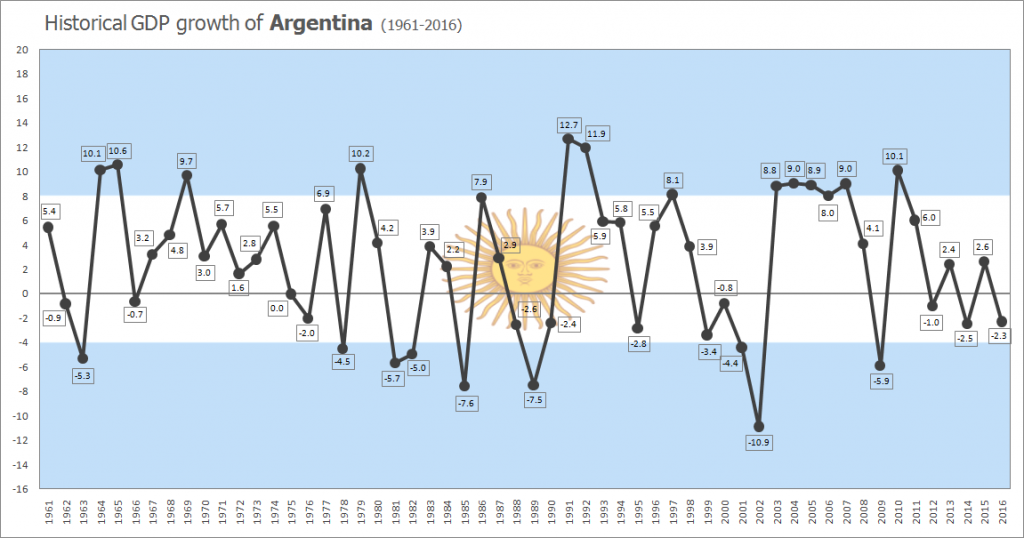 Argentina is known as the “land of silver”, and for many years the name fit perfectly considering its economic prosperity. From the beginning of the 1900s until around the 1950s, Argentina had the highest per capita income in the world and possessed an endless supply of raw materials and natural resources such as water, gas, and oil (Pieper, 2020). This period soon went crashing down with a series of political policies, wasteful spending, recessions, and debt defaults that remain to this day. Current President Alberto Fernández has already faced extreme challenges with the pandemic in Argentina, but the country’s economic crisis remains the main obstacle from the start of his leadership.

At the end of World War II, the Argentine Peso was one of the most stable currencies alongside the British pound and the U.S. dollar, making Argentina the wealthiest and most influential country in South America, far ahead of Brazil (Pieper, 2020). Unfortunately, that prosperity lasted until 1946 when Juan Domingo Perón won the presidential election—laying the groundwork for the economic downfall of decades ahead. Perón was elected by appealing to the working class and his government believed the best way to distribute wealth was through wasteful spending. Perón and his followers are criticized for spending far more than the nation earns to boost their popularity. Increased spending leads to the accumulation of debt, which then leads to the printing of cash and the rise of inflation (Faiola, 2019). Perón’s government nationalized key industries involved with infrastructure and energy, approved subsidies for social programs, and redistributed wealth by increasing people’s salaries (Rollenhagen, 2019). This initially led the country through a period of prosperity, but it was not long until uncontrolled inflation took hold. By the 1960s, the United Nations said Argentina was among the eight countries with the highest inflation in the world (Alcoba, 2020).

Although one of Perón’s legacies was setting up the future economy to have incessant inflation and debt, his other ongoing legacy is reflected in politics. Named after Perón, Peronism can be described as a populist movement that includes extreme populism and nationalism. It is often mistaken as a leftist ideology, but it is in fact a unique political philosophy that differs from other Latin American forms of leftism. Peronist policies are executed depending on their convenience for the country’s situation but always maintaining its power through strong nationalistic sentiment. In other words, it is a movement that shapes “itself to accommodate the ideologies and agendas of whoever is in power” (Rollenhagen, 2019). Peronism is used so that whoever is elected can carry out every kind of policy on the political spectrum, whether right-wing, centrist, or leftist. In a country with severe economic instability, the Peronist’s promise of representing the people’s best interest is still very enticing to hundreds of thousands of Argentinians. This populist ideology has pervaded through most of Argentinian government and historically, non-Peronist candidates have had considerably less popularity than Peronist candidates (Rollenhagen, 2019).

Last year, it was no surprise that President Alberto Fernández won the election with the support of Vice President Cristina Fernández de Kirchner. Kirchner ruled Argentina from 2007 to 2015 with Peronist ideologies. During that time, Kirchner was facing corruption charges and her spending and protectionist policies also left the country indebted. Despite all of this, she remains extremely popular, especially among lower economic classes, who have benefited from her generous social welfare policies (Kirschbaum, 2020).

President Fernández assumed power at a time when Argentina’s inflation hit nearly 54% and it owed $323 billion dollars in debt, so he has hard work ahead (Sullivan, 2020). Since the start of 2020, the country was going towards its ninth default (Sullivan, 2020). However, Fernández has recently received acclamation for reaching a debt restructuring deal of $65 billion with foreign creditors (Mander, 2020). The investors have agreed to drop their defaulted bonds for new bonds which will be paid back for less than their original value, causing them to lose a significant amount of their original investments. According to analysts, the pandemic lowered the creditor’s expectations of the amount of money they would receive given the circumstances, making them willing to conform. Following through with this deal permits the Argentine government to remain eligible for international credit markets, avoiding potential damage from another international debt default (Sullivan, 2020). Nonetheless, even with this restructuring deal settled, Argentina’s economic problems are far from over. The country has asked the IMF for aid several times, the record being in 2018 when Fernández's predecessor, Former President Mauricio Macri, asked for a $57 billion bailout loan. The country still owes around $44 billion to the IMF, so it will need to devise another restructuring plan in order to eventually pay back the debt (Sullivan, 2020).

Inflation and debt are not just obstacles for the government. Although lower classes have benefited from Peronist policies in the past, these policies are not enough to help the ever-increasing poor. Poverty in Argentina is predicted to rise sharply this year due to the pandemic, but the rate was already rising since the 2018 recession and high inflation (Lammertyn, 2020). A rise in prices limits the possibility for those with low-incomes to buy necessities and food, causing around two-fifths of Argentina’s citizens to barely be able to afford a monthly basket of staple goods (The Economist, 2019). Social and economic inequalities continue to ascend, leading to the rise of poverty to about 40.9% in the first half of 2020 (TIMES et al., 2020).

Attempts to turn the economy around has not helped those living in poverty as expected. Shortly after his election, Fernández attempted to bring some relief to struggling Argentines by freezing utility and gas prices and adding a 30% sub charge on certain transactions that were intended to address poverty (Peña, 2020). And while inflation in January began to slow down by –2.3%, food prices doubled that amount. Measures such as freezing prices are not unheard of in past governments, but they have not been particularly successful. Former President Mauricio Macri also froze oil prices in 2019 with the hope of stopping high inflation, adding to the criticism that the current governments move backward instead of forward (Montanari, 2020).

Argentina once had the strongest economy in Latin America, and with a substantial amount of natural resources and a highly educated population, it still has the elements to be extremely successful (DFAT, 2019). Thus, it must be willing to cut spending and plan a set of economic transformations. Under economic deficiency, the pandemic, and poverty, Fernández will have to face several rounds of tough negotiations with the IMF and be obligated to go through a huge reform (Montanari, 2020). Peronist policies have shown to have a powerful direct impact on the country’s economy, and without a long-term plan, Argentina will not be able to overcome its difficulties in the near future.

Peña, A. M. (2020, May 7). Argentina is trying to tax its way out of another financial crisis – why that’s so risky. The Conversation. https://theconversation.com/argentina-is-trying-to-tax-its-way-out-of-another-financial-crisis-why-thats-so-risky-137839