The Cuban Opinion of Obama: Suspicion, Adoration, and Everything In Between 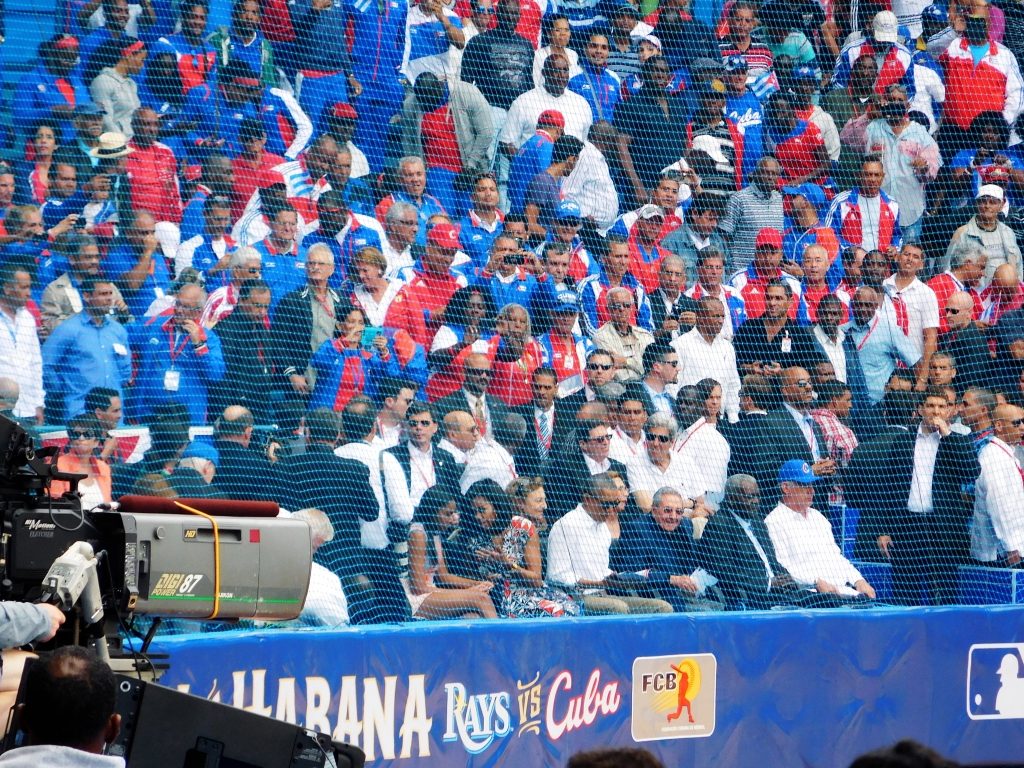 “Brother Obama,” wrote Fidel Castro in a public letter to the American president, “we don’t need the empire to gift us anything.” The article was published on the 28th of March, six days after Obama’s historic visit to Cuba ended, in the Granma, the official newspaper of Fidel’s political party. Fidel, the ex-president and current political leader of Cuba, expressed in the letter that Obama understands neither Cuba’s history nor its current political situation, and that he should “not attempt now to elaborate theories on Cuban policy.”1

In order to understand why Fidel Castro would call the United States an “empire” and refuse any of its “gifts,” one must recognize that Cuba has considered itself the victim of imperialists for the past century and a half. From the middle of the 19th century it was fighting for freedom from Spain; when, at the turn of the 20th century, independence finally looked possible, the United States intervened in the second war for Cuban independence (which would become known internationally as the Spanish-American War) and made Spain sign Cuba over as a U.S. protectorate. After a four-year military occupation there, the United States withdrew physically but retained the right to intervene militarily any time it wanted—a right legally upheld by the Platt Amendment, which the U.S. forced Cuba to include in its new 1902 constitution. Between then and 1959, Cuba had a series of presidents who answered to U.S. interests, and an economy dominated by U.S. monopolies. Among the U.S.-supported presidents was Fulgencio Batista, who eventually turned into a cruel and brutal dictator and who was finally defeated by Fidel Castro’s famous socialist revolution in 1959.

From the Revolution on, Cuba was no longer dominated economically or politically by imperialists. Instead, it suffered a debilitating economic embargo, which was instituted in a frenzy of Cold War paranoia by the United States itself in 1961. This embargo, or “blockade” as Cubans call it, is what President Barack Obama is trying to end. He has spent the past year and a half restoring relations between Cuba and the U.S., and urging Congress to terminate the economic sanctions against the small Caribbean nation. Some Cubans love Obama for these efforts. Others view him with suspicion—and given the history, it’s hard to blame them.

I was in Havana during Obama’s visit and for two months afterwards. During that time I collected impressions of the Cuban opinion of Obama, and I found it to be as complex as Cuba’s own history.

The Cuban government, which runs the Cuban media, did acknowledge that the visit was a symbol of the positive changes between the two countries. Even so, the media made sure to reaffirm Cuba’s long-suffering resolve in the face of the embargo with a lot of patriotic jargon. For example, an article on Obama’s arrival that appeared in the Granma declared:

“This point has been reached, in the first place, as a result of the Cuban people’s heroic resistance and loyalty to principles, the defense of national independence and sovereignty. Such values, which have not been negotiable for 50 years, led the United States government to admit the severe damage the blockade has caused our population, and recognize the failure of the openly hostile policy toward the Revolution.”2

Juventud Rebelde (“Rebel Youth”), another national newspaper, said similarly that Cuba has made it this far as a “result of the Cuban people’s historic resistance of the most diverse variations of aggressive U.S. policy, the wisdom of our historical leadership, the joint support of Latin American and the Caribbean, and the laudable labor of Cuban diplomacy.”3

But for the most part, that was where the positivity ended. Other newspaper articles—especially after the emergence of Fidel’s letter—grasped at any opportunity to undermine Obama’s words. During his address to Cuba at the Gran Teatro Alicia Alonso, Obama said, “What the United States was doing didn’t work.” In response, an article in the Granma asked, “‘Didn’t work’? Wouldn’t it be better to say that it was immoral? That it caused suffering and even death?...If it ‘didn’t work,’ there must be something to do that does work (something that obliges them or drives them to do what we want them to do).”4 Multiple newspapers pointed out that although Obama’s speech seemed improvised, “he’s in front of a teleprompter that the public doesn’t perceive.”4 Juventud Rebelde called the speech “conciliating, intelligent and seductive.”5 Almost all newspaper articles that I came across, even shorter informative pieces, included at least a skeptical line or two. To boot, Cuban television broadcast Obama’s speech only once—live as it was happening—but rebroadcast the criticism (or “analysis” as it was formally named) that had followed the speech multiple times, so that Cubans who missed the speech for work or personal reasons were not able to form their own opinions, and even those who did see the speech often began to doubt their positive first impressions.6

One Juventud Rebelde editorial took a relatively objective approach: it explained two contrasting sides of the public’s skepticism towards Obama. One side, which the article called the “perverse conspiracy” opinion, views Obama as an insincere and even deceptive figure. Cubans of this opinion—an opinion that the government supports—see recent U.S.-Cuba discourse as “a plan conceived to open the doors to North American capitalism,” which in time would bring about “the renunciation of national sovereignty. It would be the first steps on the path to returning to the Cuba of the rich and poor, dictators and mobsters, that we had in the fifties.”7

The other side of public skepticism is that of the “diverging conceptions about human society.” This opinion sees Obama as a good guy who genuinely wants to help, but whose beliefs about building successful societies are different from Cuba’s beliefs. For example, Juventud Rebelde says, Obama “sees private enterprise as something that ‘empowers’ the people; we see it as something that empowers ‘a part’ of the people, and a relatively small part.” This and other “divergences” constitute the gap in understanding between the U.S. and Cuba.7

Juventud Rebelde is right: both of these views exist on the streets of Cuba. “In Cuba,” a middle-aged, well-educated historian told me in Havana, “many people are seeing this as a change in policy of the United States that means more colonialism. That is, he’s here, visiting us, but not as a step of development—rather, to continue colonizing us by other methods. Like, the blockade didn’t take effect, so we’re going to change policy, we’re going to enter Cuba in a different way.” This is what Fidel was alluding to in his letter, and what so many state newspapers stated outright. Other Cubans think that while Obama may mean well, he’s just not on the same page as Cubans.

But what Juventud Rebelde didn’t mention was that while Obama’s motives may be in question by some members of Cuban society, there is still an overwhelming public appreciation for what he is doing. Indeed, Obama is treated in Cuba as nothing less than a celebrity. When he visited Havana, Cubans waited in crowds on the street to see his motorcade drive by. A taxi driver in Sancti Spiritus had a picture of Obama hanging from his rearview mirror. In Ciego de Avila, a man on the street asked my friends and me where we were from; when we told him the United States, he called, “¡Viva Obama!” When I attended the Tampa Bay v. Cuba baseball game on March 22, which Obama attended, everyone in the stadium clambered onto fences and stood up on bleachers to get a glimpse of him—and then waited like that for 45 minutes before he actually came out, craning their necks towards home plate. When he did emerge, the cheering was deafening.

Even putting aside Obama’s star power, many Cubans genuinely like him. In fact, the overwhelming majority of individuals I spoke to had only good things to say, across the country and across the political spectrum. An art vendor from Camaguey who does not support Fidel’s Revolution told me emphatically, “I loved Obama’s speech. Everything he said was right!” A non-Fidelista at the University of Havana called Obama a “lucid man” whom history has given an “opportunity to begin to concretize, to materialize, the efforts that over 50 years have been made by Americans and Cubans of goodwill.” A sandwich vendor in Playa Girón, a self-declared Fidelista, also expressed approval for Obama, saying, “Obama is doing incredible things.” Young people especially were enthralled with Obama. A 26-year-old dance teacher summed up her peers’ views when she said, “I love him. I feel like I can trust him.”

Obama’s visit to Cuba had an indisputably positive effect on the country overall. Despite the history, despite the distrust, despite what the Cuban government would like the public to think of the U.S., the gesture of goodwill began the process of breaking down barriers between the two peoples. The owner of a small jewelry store in Sancti Spiritus related the following story to me:

“Last month I had the Tampa-Cuba game on this little television here, and a whole busload of Americans crowded into my shop and sat down here on the floor. We all watched the game together. I usually get a lot of Europeans in the shop, and they are kind of, well, stiff. But I like Americans—they are much friendlier. Much more amiable.”

If Obama’s efforts continue to be fruitful, incidents like this will become more common; the estrangement between the American people and the Cuban people will finally turn into a friendship.