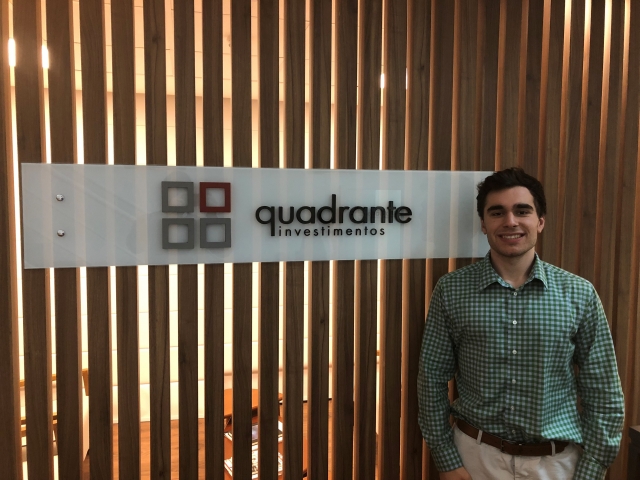 I go to Pitt currently, I study Industrial Engineering. I’m a senior technically, but I’m going to graduate in the spring of 2020 because I’m part of the co-op program. I’m actually on my second rotation of co-op right now. And for my co-op, I work for a managerial consulting firm, and that will likely be the field that I pursue upon graduation.

I mean, I wouldn’t say it’s the end-all be-all, it’s not like I shake hands with somebody and say “Hi, my name’s Tristan, I’m Latino”. But I do consider it an important part of my culture. My father is from Brazil, I’m a Brazilian citizen, I speak Portuguese, I’m a big fan of the Brazilian national soccer team and soccer in general. I actually took Portuguese classes at Pitt to further advance my Portuguese speaking, and I am part of the Brazil Nuts club at Pitt. It’s nice to find comradery with other Brazilians on campus because in the United States in general there’s a very large Mexican-American population, so if two Mexicans meet each other they’re like “You’re Mexican, I’m Mexican, okay, cool.” But given the fact that there aren’t many Brazilians here in the United States, and especially in the Pittsburgh area, if I meet someone who’s Brazilian or who has Brazilian parents or relatives it’s really interesting and really cool and I find a lot of comradery in that.

I mean, I value the food, I value the culture, that’s for sure, which go hand-in-hand. I value the differences and the diversity, I think that’s all cool.

In the workplace, never. I think maybe when I was in, like, fifth grade once somebody said something mean to me, like, “Brazil sucks” and I was like, “Oh, okay, well you suck.” I think that’s probably the worst thing that’s happened to me. Nowadays if anybody says, “Brazil sucks” I’m like, “yeah, the politics suck there.” But I’ve never really faced any deliberate discrimination based upon that.

I mean, when I’m with my friends I’ll joke around like, “Hey guys, I’m Latino,” and they’ll be like, “Oh, shut up Tristan, you’re white,” because I am and I look Caucasian. And that’s something that’s different about Brazil; you know, in Mexico and Guatemala and other Central American countries you have a majority of the population that is Mestizo, while in Brazil there aren’t many Mestizos. There’s an indigenous population in the north, but for some reason the conquistadors didn’t mix very much with the natives, so in Brazil just about everybody’s black or mixed, and white makes up about 45% of the population. So my friends are right when they joke around that I’m white, because I’m both Caucasian and Latino, and on the spectrum of Hispanic/Latino in the United States, that is a little different.