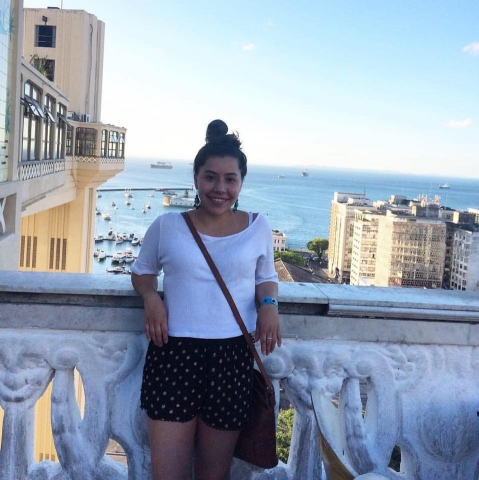 I am currently a Fulbright English teaching assistant in Brazil in the state of Paraíba in northeast Brazil. And next year I will be coming back as a mentor, so I will be a mentor to a group of ten new ‘Fulbrighters’ in Brazil.

It’s really important to me. Especially since both my parents are from Costa Rica, I really feel like I grew up in a mini-Costa Rica in a way, you know, eating Costa Rican food, speaking Spanish at home. But especially being abroad, I think it’s really important because, of course I’m still American born-and-raised, but I think a lot of people have the perception that most Americans are Caucasian, blond, blue eyes, so I always get this, like “Are you actually American?” So I think it’s really good in terms of being a cultural ambassador, which is part of our job description for Fulbright. I just gave a workshop on Latinos in the U.S. last week and saying, you know, almost 20% of people in the U.S. are Latino or of Latino heritage. So I think more now than ever, it’s really important to me.

I don’t think I’ve been treated badly per say, but I think there has been some ignorance around the topic. Like I mentioned earlier, here [in Brazil], being sometimes dismissed as not being truly American. But I think that comes down to people not really realizing what the composition of the U.S. is, right? Other than that, I think, being reduced to stereotypes too—like, that all Hispanics must be Mexican, so I’ve had people say, “Oh, why aren’t you darker?” or “You must love hot sauce,” and in Costa Rica people don’t really eat hot sauce. So, I think things like that—but I’m not sure whether they stem from being treated badly or more so from ignorance.

Shout-out to CLAS! I learned so much about myself and Latinos in general during my time as an intern there.