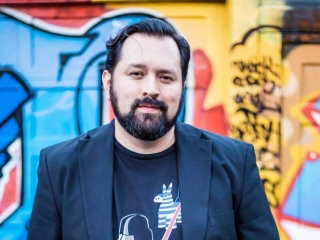 I am a writer, performer, arts events host organizer and standup comedian. Currently I am the community arts organizer for the San Francisco AIDS Foundation, I run their art program managing three gallery walls, and organizer their performance series, as well as other literary and artistic community based events in the center of the Castro at their Strut building. I also regularly host, organize, and curate poetry, and storytelling shows for KQED Arts. I am also the founder and head organizer for ¿Donde Esta Mi Gente? Created in part by a grant from the Galeria de la Raza. ¿Donde Esta Mi Gente? Is a Latinx Literary and performance showcase that I created because I one day realized I had been working as a performance poet for years but had never been in a show with all Latinos. I was usually always the only one on a line up. We’ve done shows with all Latix performers all over San Francisco, from universities, to bars, to theatres, poetry festivals, and even sexual health clinics.

My other job is as an literary artist and performer, I’ve performed all over San Francisco, from the Yerba Buena Center for the Arts, CounterPULSE, SOMArts, Oasis, Martuni’s, Verdi Club, Feinstein’s at the Nikko, Top of the Mark, PianoFight, Starlight Social Club, in performance art shows, storytelling shows, and standup comedy line ups. I’ve worked with RADAR Productions, I’m a winner of Best of Bawdy Storytelling, I’ve won the Moth in LA, I’ve won Literary Death Match, I’m currently the reigning Muni Haiku Champion, been featured at Writers With Drinks, LitQuake, QuietLighitning, and I’m published in several anthologies on line and in print. I’m a two time nominated Push Cart Prize writer, named one of the top 13 Bay Area Writers to watch in 2016 by 7x7 Magazine. I also get paid to read erotica out loud to a cheering crowd every month as “The Voice” of Shipwreck SF Erotic Fanfiction competition and podcast at the Booksmith in the Haight. I’m the recipient of an Individual Theatre Artist grant from the San Francisco Arts Commission, and currently working on a project with MACLA (Movimiento de Arte y Cultura Latino Americana) that will focus on writing new Queer Latinx Superheroes to create a new interactive Comic Book centered multifaceted performance in San Jose funded by a grant from the Creative Work Fund.

2)     How important in your identity is being Latino?

Very important, since I can’t stop being Latino, my parents would send me back to Mexico. I was born in Toluca, Mexico and grew up there, till I was about 9 years old, then we moved to California and suddenly I had to learn how to speak English, and get used to all the strange and colorful new options for cereal. I am very proud of my heritage, I speak Spanish fluently still and write it, I’m very close my family.

3)     Is there something that you particularly value of your nationality or being Latino?

I love how incredibly creative we are, adaptable, innovative, diverse. We excel in the arts, in music, but we are also nerdy AF! I know Latinx killin’ in the tech world, STEM world, visual arts world. Some sad dude tried to give me shade last week, “How come there’s so many Latinos that got into the art program this year?” I said “We come from the world of Diego Rivera and Frida Kahlo, dude, we’re good at art, DEAL WITH IT.” And then sun glasses magically appeared on my face.

4)     Have you been treated differently because of being Latino (in the workplace, in public settings…etc.)? If so, can you describe a situation?

Long answer: I was the only Latino in my acting program at my University, there was a closeted (unusually ugly) Christian Republican in the theatre department who was anti immigrant, anti Mexican, anti gay, anti everything. Several times he screamed in my face to go back to Mexico. I held my ground and defended myself, “I’m here to take your jobs, and sleep with all the hot guys you’ll never get to, since you’re still in the closet, you douchebag.” But it was exhausting to have to deal with someone like that for years, surrounded by white people who didn’t know how offensive it was, or thought I was over reacting when I would complain about him. I got a lot of “Oh, he’s not so bad.” from the entire department. It is still a kick in the gut to a lot of my POC friends how much we put up with back in the day, and paid for it, I am still paying my student loans, for an acting program that had me learn how to act in white roles next to white people (some of them were very nice, please don’t send me emails full of white tears) the entire time I was there. In the four years that I was in that acting program, I never ever got to act in a Latino role, or audition for a play that wasn’t super white. I got roles, I learned a lot, I appreciate all the great friends I had at SSU, but so much of it was spent trying to keep my mouth shut, since it was before a time we had the vocabulary we have now to combat these inequalities and situations.

Short answer: If I had a dollar for every time a white guy has told me I’m exotic, caliente, or to speak Spanish to them in bed, I could buy myself a very nice dinner and a movie.