You've got to admit it's getting better 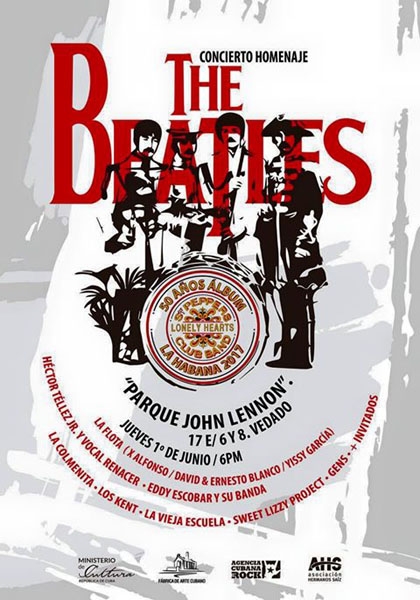 “I used to get mad at my school,

The teachers who taught me weren’t cool

Holding de down, turning me round,

Filling me up with their rules.

I’ve got to admit it’s getting better,

A little better all the time.”

Shared consumption of a mix of rum and the classics of rock music -reproduced on old cassettes, clandestine products of recordings of recordings of recordings-, is among the main surreptitious rituals created by detective Mario Conde and his endearing friend “el Flaco” to periodically celebrate their friendship through bitter commemorations of the illusions of their past and the frustrations of their present. Members of the first generation of children born of the Cuban Revolution, Conde is the central character of several of the novels in which Leonardo Padura paints the survival strategies through which Cubans manage to get by in the decadent Cuba that enters the 21st century among the ruins of the achievements and deceptions of the revolution.

The massive celebration, in several Cuban cities, of the 50th anniversary of Sgt. Pepper’s Lonely Hearts Club Band, suggests that, if the regime has by no means lost its authoritarian nature, it may have left behind the perception of lovers of rock music as having shamefully succumbed to the siren calls of cultural imperialism. In fact, the Ministry of Culture itself endorsed and supported the organization of the homage. Sincere gesture of cultural pluralism, accommodation to the stubbornness of facts, symbolic compensation, safety valve, some combination of all those things, or none of them? Whatever the accurate interpretation is, I have no doubt that “Condecito” and his friend would have not considered the episode a negligible one.

One could, of course, observe that the event does not compare, in sheer magnitude, to the multitude formed around the Rolling Stones last year; or that, after all, Pepper's main birthday party took place at Havana’s John Lennon square, inaugurated almost twenty years ago by Fidel Castro. But The Beatles -a band that, interestingly, Che Guevara liked quite a bit- had been the target of Castro’s explicit nationwide ban in 1964, and the post-mortem-born-again Lennon of 2000 was not the frivolous kid who wanted to hold the hand of hysterical bourgeois teen-agers, but a political dissident having made the cut into J. Edgar Hoover’s archives. “In the dictator’s eyes, Ella Morton explains, Lennon was no longer a symbol of the decadent West, but a revolutionary dedicated to emancipating the working class. That conveniently made him a posthumous ally of Cuba […].”

Not that Sgt. Pepper could not be linked to certain expressions of the “campus radicalism” of the 1960s without forcing history too much, but there is a significant difference between celebrating with Imagine, as was the case in 2000, and doing it with Please Mr. Postman and Let it be, as yesterday did the children of La Colmenita, an infantile theatre company. And the performers are in this case as significant as the tunes: the celebration of Sgt. Pepper attracted a vertical cut of the pyramid of ages of Cuban society, ranging from La Colmenita to Eddy Escobar -a 47 year-old beatlemaniac who has been listening to The Beatles for almost four decades-, and including well-known bands as Los Kent, La Vieja Escuela, and La Flota. Moreover, the translation of some Lennon-McCartney tunes to the language of salsa confirmed the traditional eclectic inclinations and versatility of Cuban musicians.

That is, according to Guille Vilar, a recognized journalist and connoisseur, hardly surprising. As a matter of fact, the influence of The Beatles goes back to the very days of the ban, and reached a list of artists (Silvio Rodríguez, Leo Brouwer, Sergio Vitier, Chucho Valdés, Juan Formell, Síntesis or the Grupo de Experimentación Sonora) in which enthusiastic and persistent supporters of the Castro regime are not missing.

Actually, what should be surprising is the arrogance required to expect a governmental ban to magically make turn such a musical people tone-deaf; fortunately, Cubans knew better, and so deserved Sergeant Pepper.