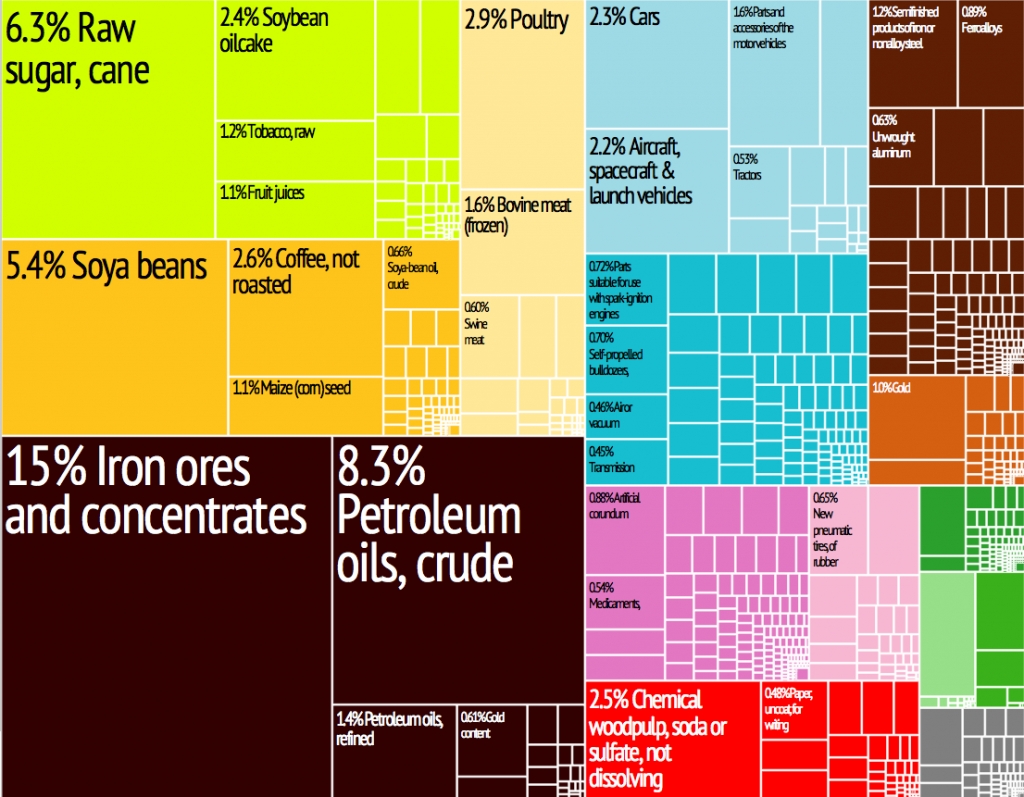 The Global Financial Crisis prompted academic and policy debates on the need to include political factors in the analysis of economic phenomena, such as trade exchange and financial flows among sovereign states. However, how can one account for the impact of government action on a country’s foreign economic relations? Such a question becomes even more crucial for both practitioners and scholars in times of change in the international system, with the rise of Non-Western powers and economic expansion in the Global South as a whole, including Latin American countries. One can expect that in such a scenario states have more room for shaping their foreign policy—including in economic issues—according to their own interest. Yet what is the reach of a country’s agency in a context of systemic flux, particularly whenever one studies sovereign states located outside the core of an international system traditionally dominated by Western powers?

Brazil’s case in the 1990s and 2000s subsidizes such debate. Being a middle power located in the semi-periphery of the international system, the country has demonstrated a latent desire to gain more weight in global affairs. Achieving such a goal would imply in diversifying trade ties beyond traditional partners in the “Global North” (chiefly the United States, European Union [EU] and Japan) and the Southern Cone (Argentina, Paraguay, and Uruguay, with which Brazil formed the Common Market of the South, MERCOSUR, in 1991). Such a target had been pursued since after the beginning of unilateral tariff liberalization, launched in 1990, yet was accomplished in the first decade of the 21st Century, after Presidents Fernando Henrique Cardoso’s (1995–2003) and Luiz Inácio Lula da Silva’s (2003–2011) administrations. Both made use of intensive economic diplomacy, having done several trips to “sell” Brazil abroad. Nevertheless, did they actually lead the country to conquer new markets for exports in the Global South, including the rising powers, in particular China?

In the article “Is Politics Behind Trade? The Impact of International Trends and Diplomatic Action on Brazil’s Exports during Globalisation” (Bulletin of Latin American Research, Vol. 33, No. 2, pp. 140–157, 2014), I present evidence that contradicts those who take for granted that governmental/state agency prevails over international structures as a country’s diversify its trade partnerships. Under Lula’s government, Brazilian exports followed world-wide trends due to the increasing demand of raw materials. Such a finding dismisses the former president’s claim that his government was responsible to diversifying the country’s political economic partnerships—an expected assumption due to Lula’s Workers Party’s historical anti-American, left-wing stances amid the pursuit of a more equitable world order. Moreover, in contrast to conventional wisdom, I found out that only during Cardoso’s government—a member of the Party of Brazilian Social Democracy (PSDB), often considered too much aligned with neoliberal ideas—trade ties correlate with the pursuit of new diplomatic partnerships, which nonetheless did not impact later trends in Brazilian exports. Such relationships are assessed through the use of statistical analysis, complemented by the qualitative study of government statements on foreign policy.

Between 1991 (the first year after the beginning of unilateral liberalization) and 2009 (the first full year following the Global Financial Crisis) the participation of Global North’s countries in Brazilian exports declined from 63.9 percent to 37.6 percent.1 Among all Global South partners, the Emerging Markets (comprised by China, India, Mexico, Russia, South Africa, and Asian Tigers—Hong Kong, Singapore, South Korea, and Taiwan) are the ones whose share in Brazil’s merchandise sales abroad varied positively the most (2.5 times, from 10.2 percent to 25.3 percent).2 To identify whether there was mutual impact between Brazilian growing trade connections with the Global South and patterns of political diplomacy, I run two set of regressions. The first analyzes the effects of trade on the number of bilateral agreements of any type Brazil signs with an individual partner or group of partners. The second explores how the same number of signed treaties, international structural factors (such as the overall variation of a partner’s imports), and domestic economic indicators (the exports of commodities only) increases the probability of Brazil expanding its exports to a given partner.

My units of analysis consist of 18 partners (either countries or group of countries) based on which Brazil informally organizes its diplomatic relations. The dataset I assembled based on official data from the Brazilian government has observations for all years between 1992 and 2008 divided into three periods: A (1992-1996), B (1997-2002), and C (2003-2008). Rather than corresponding a presidential terms, each interval represents a different phase of Brazilian liberalization. In period A, which aggregates the administrations of Presidents Fernando Collor (1990-1992, which launched liberalization) and Itamar Franco (1992-1995), as well as Cardoso’s first two years in office, Brazil was still attached to traditional partners in the Global North while building up the MERCOSUR. Period B corresponds to the years in which there was growing skepticism in the government about the actual benefits of what can be dubbed as neoliberal globalization—briefly defined as the type of market liberalization in which countries in Global North were the main winners of world-wide economic integration. Finally, period C comprises Lula’s administration before the Global Financial Crisis and, according to conventional wisdom, the years when Brazil pursued closer ties with the Global South.

In fact, the results confirm that emphasis on trade ties with the Global South increased under Lula. Having said that, diplomatic action measured by the number of signed agreements does not explain such emphasis. In all periods, the proportion of commodities exported explains which partners increased their share in Brazil’s overall exports. Such indicators have more significance in Period C, reflecting the growing importance of agriculture and mining for Brazilian economy amid China’s rise. The statistical analysis thus furnishes evidence that systemic trends alone affected the redirection of exports to the Global South. Also, shifting patterns of world-wide trade influenced the direction of diplomatic action only in period B. That is the case insofar as between 1997 and 2002 more political agreements tended to be established with partners whose demand for foreign goods from any country (not only Brazil) increased. Such a result suggests that before Lula came into office in 2003 Cardoso sought to diversify political partnerships beyond the Global North as countries Global South started to gain economic strength, becoming worthwhile partners.

A brief assessment of presidential statements on foreign policy corroborates the findings of the regression analysis. I focused on identifying and understanding views Cardoso and Lula expressed in the Annual Presidential Messages to the Congress (composed of the Chamber of Deputies and the Senate) on the international system and Brazil’s foreign political-economic strategies. At the end of period A, the country embraced neoliberal globalization as part of its strategy for stabilizing the economy after almost a decade of intermittent hyperinflation and failed strategies to reduce variation in prices.

Such strategy demanded confidence-building with the Global North to demonstrate Brazilian commitment with neoliberal globalization, helping the country to attract more foreign investment. Reliance on foreign capital as an important part of Brazil’s development strategy remained paramount at least until 1997, when neoliberal globalization’s shortcomings led to a more independent foreign policy. Such a shift was reflected not only in the pursuit of partnerships beyond the Global North and MERCOSUR, but also in the growing assertiveness of Brazilian diplomacy in international fora.

Cardoso thus strengthened partnerships with the Global South without weakening links with the Global North, which were severed only after Lula came into office in 2003 amid the growing importance of emerging markets (particularly China) for the world economy. On the one hand, Lula emphasized relations with the developing world partially due to PT’s stances in international affairs, focused on the pursuit of a fairer world order—at least at the rhetorical level. On the other, implementing such views less daunting task partly because the Global South was emerging economically, demanding more imports, particularly of raw materials.

Therefore, international structural factors prevail over domestic agency. Even in the semi-periphery governmental action thus tends to simply respond to global trends, as it was the case with Cardoso’s pessimistic perception of neoliberal globalization and Lula’s rhetoric on the need to build closer ties the Global South. The conclusions indicate two main research avenues to be explored by both academics and policymakers. One consists of applying the same framework and questions to other Latin American nations in the analyzed period, as they went through a development pathway similar to the Brazilian one, with the embrace of neoliberal globalization followed by economic expansion due to the 2000s commodity boom. The other strand refers to the assessment of the aftermath of the Global Financial Crisis. Has the end of the commodity boom left any agency for Brazil and Latin America to repositioning themselves within the international political-economic arena? The answer is hardly positive insofar as all mentioned above suggests that even during the rise of the Global South the region remained subject first and foremost to structural constraints—as it seems to have been the case for centuries.