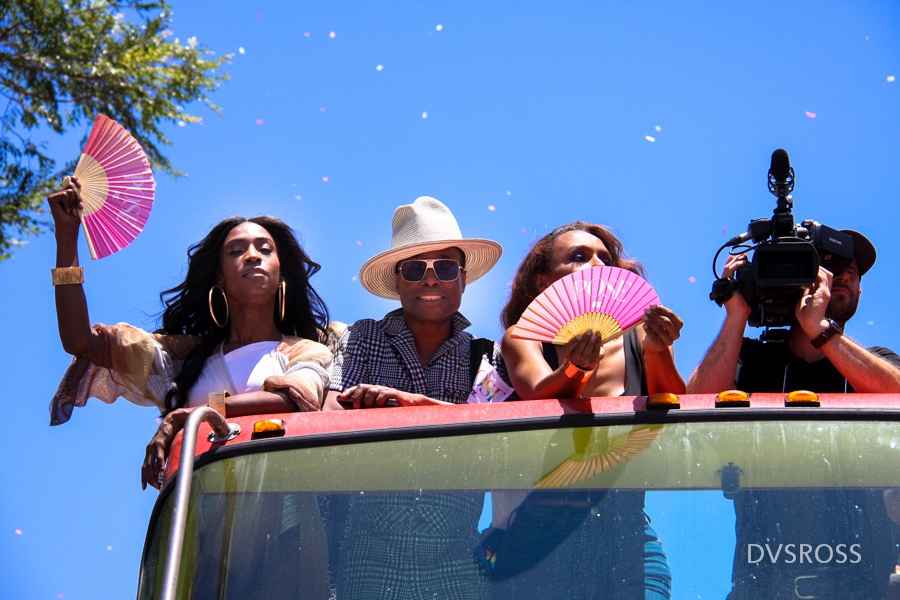 Afro-Latinx celebrities are making their way into the limelight as media is beginning to center the experiences of queer BIPOC communities. A major milestone for LGBTQ+ communities of color is the success of the show Pose. Starring Pittsburgh native Billy Porter, Tobagonian-American actress Dominque Jackson and Dominican American actor Angel Bismark Curiel, this show has redefined media and representation. This show has a highly diversified cast composed mostly of queer, Latinx, gender non-conforming actors of color. Notably, it has been considered to have the largest cast of transgender actors. It is evident that diversifying media has opened a plethora of doors for these underrepresented populations.

Ball culture, drag ball culture, the house-ballroom community, the ballroom scene or ballroom culture and similar terms describe a young African-American and Latin American underground LGBTQ+ subculture that originated in New York City, in which people "walk" for trophies, prizes, and glory at events known as balls. Pose is a television series that showcases African American and Afro-Latinx LGBTQ+ groups in the New York ballroom scene during the 1980’s. This production touches on a multitude of experiences faced by LGBTQ+ individuals of color regarding health, family, expression and sexuality. One, of the many, Afro-Latinx cast members that has helped push these boundaries is Mj Rodriguez. Mj is a trans, Afro-Latinx actress who has starred in numerous roles on television and Broadway. She is of African American and Puerto Rican descent. Her transition began in 2012 as she put her career on hold to focus on hormone replacement therapy and her privacy. Her reemergence was prosperous, and her career took off when she landed a major role in Pose. She continues to be recognized for her significant contributions to the trans community as well as the Afro-Latinx community.

Indya Moore is another trans actor that has contributed significantly to the LGBTQ+ community of color. Indya is a non-binary actor from the Bronx and they are of Haitian, Puerto Rican and Dominican ancestry. They have become an inspiration for many in light of their recent work in the show Pose as another major character in this show. They began modeling at the age of 15, as they were in foster care after being alienated by their transphobic parents. They gained recognition over the years and by 2017, they were walking in New York Fashion week for Vogue. Presently, they have made great strides for the trans community, as they became the first transgender individual to be featured on Elle magazine. Though they are of Dominican and Puerto Rican descent, they identify solely as Afro-Taino. When asked about their identity, they stated,“A lot of the culture was lost through imperialism and there’s still so much distance and disconnect with me…”” I did learn a lot about my gender variance, it was acknowledged through my ancestry. Something that was very important to me: that my ancestors loved me. And that I am my ancestors’ dreams” (Rodriguez-Jimenez, 2019).

Media is a powerful tool that aids in disseminating information. It is important to note that education is not accessible to all. Using education, a privilege we have, as resistance within the same field that excludes us is possible yet remains a challenge that will linger in this community seeing as not every Afro-Latinx [or Afro-Indigenous] person has access to such resources that will allow them to decolonize themselves from the Eurocentric, homo/transphobic, and heterosexist ideologies that continue to stigmatize us (Glenn, 2020). Where academia fails, media provides exposure and prefaces topics that have otherwise been deemed as taboo. The show Pose has aided in creating awareness and celebrates transness, Blackness, Latinidad, queerness and so much more.

Ashley Brown is a junior at the University of Pittsburgh majoring in Nonfiction English Writing and Spanish with a minor in Africana Studies and certificates in Latin American Studies and Sustainability. She is also the President of the Latinx Student Association at Pitt. Ashley is primarily interested in racial and environmental justice, liberation movements for BIPOC, and raising awareness about Afro-Latindad. Upon graduating, she plans to pursue a career revolving around environmental sustainability and anti-racism.

Rodriguez-Jimenez, Jorge. “Indya Moore Told Reporters On The Red Carpet That They Do Not Identify As Latina And Here's Why.” We Are Mitú Music, Movies, Sports &amp; Business. 100% American &amp; Latino., Wearemitu, 24 Sept. 2019, wearemitu.com/entertainment/indya-moore-identify-afro-taino/.