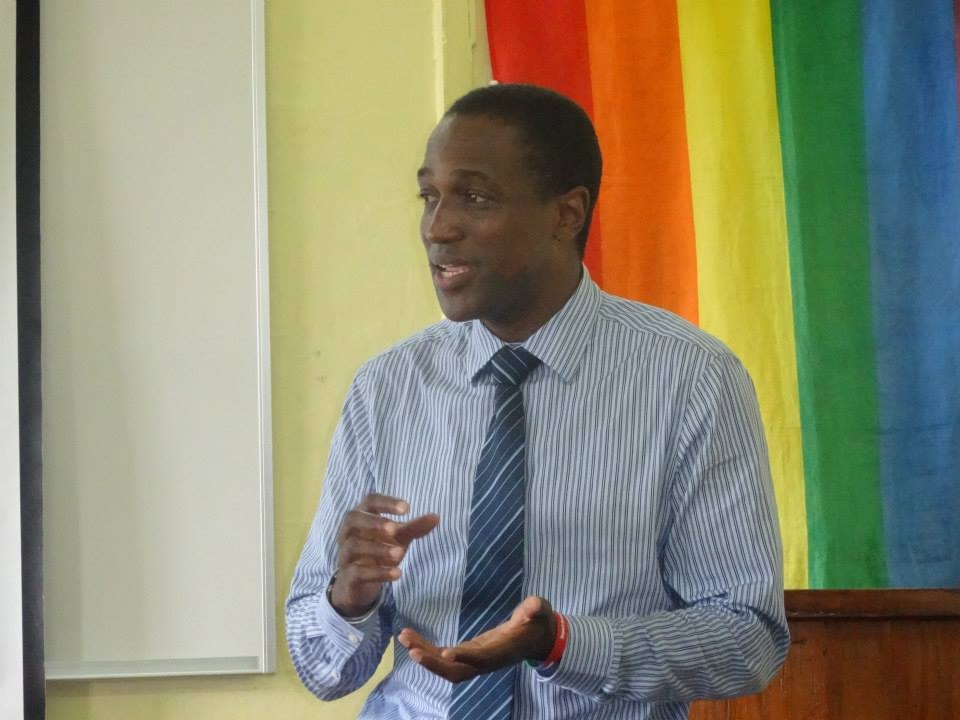 Upon meeting Maurice Tomlinson, one would never guess all that he has been through in his life. His smiling face lights up the room and his laughter is immediately contagious. Nothing about the LGBTI rights advocate’s demeanor reveals that he was forced out of his home country of Jamaica after threats to his life.

On November 10th, Maurice Tomlinson came the University of Pittsburgh to give a lecture on his work and the documentary An Abominable Crime, in which he is featured. The LGBT activist is using his personal experiences to spread awareness about the violence and discrimination against LGBTI persons in Jamaica. He explained how the extreme homophobia in Jamaica has only developed recently and that this hatred is an American export. In the past fifteen years, Jamaica transformed from a nation that allowed LGBTI persons to live quietly without fear of attack. This transformation was due to the influx of American Evangelicals into Jamaica who began spreading the myth that all homosexual males are pedophiles. Soon the idea that the nation had to protect their children from LGBTI persons became a prevalent part of Jamaican culture.

For Tomlinson, this meant his life as a gay man and LGBTI activist, who flew under the radar for most of his life had to confront the new reality that he was seen as a criminal. His life entirely changed when one day, a photo of his wedding to a Canadian man was featured on the front page of the newspaper alongside a copy of Tomlinson’s teaching schedule at a local university and a description of his vehicle. After this was published, Tomlinson received countless death threats and he knew it was time to leave. He fled to Canada in order to save his own life.

Still, when Tomlinson left Jamaica he was unable to abandon all the LGBTI people who did not have the opportunity to leave. He is well aware of how easily he could have been kicked out of his home at a young age and forced to live in the streets. Seeing how there was still so much work to be done around the world for LGBTI rights, Tomlinson got involved in his new nation of Canada, working with his husband on providing LGBTI sensitivity training to Canadian police officers. Before long, Tomlinson realized he could not avoid Jamaica and he decided he needed to continue his fight for rights and equality there. He saw the severity of the problems there in areas such as how the government is preventing LGBTI persons from getting any assistance by deeming it “aiding and abetting a crime”. The president of the Jamaica Teacher’s Association said that if an LGBTI student seeks guidance at school, they cannot be helped and must be “reported to the proper authorities”. The Jamaican government also says that airing television ads against the buggery laws in the country or discouraging violence and discrimination against the LGBTI community is also categorized as “aiding and abetting a crime”.

Tomlinson decided to make trips back to Jamaica to combat this violence and discrimination, even if it meant that he could lose his life. He started working again with J-FLAG to do countless awareness events and to help LGBTI individuals with their day-to-day struggles stemming from their gender identity and sexual orientation . He also decided to take his battle for rights into the courtroom.  He has three major cases fighting LGBT discrimination throughout the Caribbean. The first is a legal battle to allow for a short ad about respecting LGBTI persons, created by Jamaican human rights activists and AIDS-Free World, to be shown on television. The ad was approved by the Broadcasting Commission of Jamaica, but stations have refused to air it. Tomlinson is arguing that his freedom of expression and right to disseminate and distribute ideas through media has been violated. His second legal battle is an even bigger challenge, as he argues to repeal the anti-sodomy law in Jamaica. This law is used to terrorize LGBTI individuals and is supported by a large majority of Jamaica’s population. Currently, anyone convicted of this crime can receive up to ten years of imprisonment with hard labour. Tomlinson argues that the LGBTI community cannot truly feel safe in Jamaica until this law is repealed. Finally, Tomlinson just concluded a case in front of the Caribbean Court of Justice which aimed to remove the laws in both Belize and Trinidad and Tobago which ban the entry of “homosexuals”. The court decided that citizens of CARICOM countries cannot be denied entry based on their sexual orientation. The court then urged both countries to repeal these laws.  This decision, however, does not guarantee that LGBTI citizens of other nations will be allowed into Trinidad and Tobago or Belize. Tomlinson said that even though the decision was not entirely in his favor, this is a major victory for LGBT individuals in the Caribbean. He chooses to stay positive about the decision and what he sees as progress in the movement.

Whether these court cases end in wins or losses, Tomlinson refuses to stop fighting for those who cannot fight for themselves. He still travels frequently to Jamaica in order to increase awareness and battle in court. When asked about how he is able to put himself into such a dangerous situation, he stated that he choses to be naive about the whole situation and to not think about the true cost. If he did, he might not be able to return. Still, Tomlinson is careful not to spread a hatred of Jamaica. He choses to remind his audiences that in other areas, Jamaica has been progressive in terms of human rights. Tomlinson focuses instead on the potential Jamaica has to change and become more accepting of the LGBTI community. He says that the best way to do that is to spread awareness, which is why he takes time to speak to students, professionals and leaders around the world. He urges everyone to share the message and to continue to spread the message of love and acceptance.