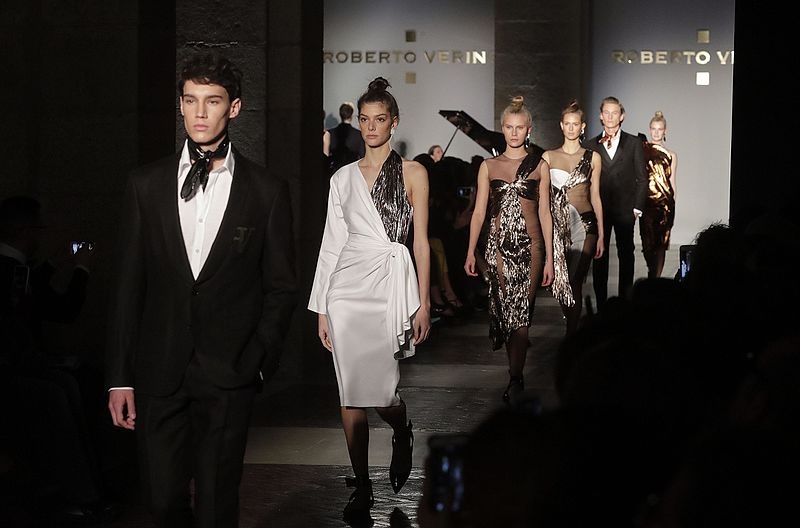 For years, global fashion has looked overwhelmingly Western.  Prominent displays of the world’s top designers have been showcased around the globe; or rather, they have graced runways in New York, Paris, Milan or London.  Some of the most celebrated companies in fashion like Kering and LVMH are based in the United States or Europe. With few exceptions, high fashion has been created in Western countries and reserved for consumers within those geographical constraints.

However, demographic variations and recent market trends are revealing that this model could prove to be devastating for the industry if it fails to adapt and recognize one of its largest consumer bases (and sources for creative genius) -- Latinos.

According to the Nielsen report titled Latina Power Shift, by 2060, Hispanic women will make up around 30 percent of the total female population.  Looking to the nearer future, by 2019 Hispanics will hold 10.6 percent of the United States’ buying power.  In 2014, this buying power totaled $1.3 trillion USD, and it is growing (Campbell 2015).

What is more, surveys have collected data showing that Latinas control household spending in the majority of Latino households, and the women have been bolstering fashion sales with that power.  Despite currently making up less than 20 percent of the female population, Latinas pushed one fifth of total women’s fashion footwear sales (an estimated $3.3 billion USD in the footwear industry alone).  Market researchers have also discovered that older Latinas tend to be more fashion forward than their counterparts from other ethnicities, meaning that they can be expected to follow trends and spend more dollars on new styles for much longer than other women (Campbell 2015).  These women may also expect to see more age-appropriate alternatives of new styles that are not currently being designed or brought to production.

The lack of attention given to Latina end users is a problem, though, that takes root at the very first step of production, design, and endures the entire supply chain.  Over the years, very few Latinos have managed to make their name in the fashion industry, although designers like Carolina Herrera and Oscar de la Renta did so with incredible success.  Only 4.3 percent of the 2017 Business of Fashion 500 list, which ranks the most influential individuals in the fashion industry, were Latinos.  This percentage included not only designers like Uruguay’s Gabriela Hearst, but also models like Puerto Rico’s Joan Smalls (Solá-Santiago 2018).

Although the number of Latino designers who have managed to enter the coveted space of high fashion still fails to reflect current demographics, some have argued that on the runways, Latinos and other minorities are more accepted than ever.  In 2007, Bethann Hardison, the founder of the Diversity Coalition and a former model, started a meeting to begin the conversation about the screaming lack of diversity in fashion (Givhan 2017). Hardison recounted her own experiences from prior New York Fashion Weeks, when “Casting directors would send out notices to all the modelling agencies in the city, saying ‘no blacks, no ethnics’ - we don’t want to see them” (Pike 2015). Starting in 2013, the activist began to track and publish designers’ hiring practices, pushing many to include minorities in their ranks (Givhan 2017).

However, despite the push for inclusion, the 2015 Business of Fashion team reported that from the 117 key fashion shows in New York, London, Milan and Paris, Hispanic models only accounted for 1.6 percent of 3,875 model bookings (Pike 2015).

The fashion industry is often cited for its role in celebrating cultures, so many are confused as to why this sentiment has not been extended to Hispanic cultures.  Robin Givhan, fashion editor for The Washington Post, considers that “We are drawn to people who look like us”; as the majority of decision makers in the industry are currently “...blonde and blue eyed,” as she put it, this is the standard of models they look for.  Other professionals in the industry say that luxury fashion brands are actually selling the “myth and ideal of the western product” to emerging markets, making the choice to leave out not only Latino but all minority groups from styling, sales methods and models very deliberate (Pike 2015).

Of course, others would argue that this decision jeopardizes alienating an enormous consumer base along with an extensive talent pool.  In response to their exclusion from the mainstream high fashion industry, Latinos have coordinated trade shows throughout Latin America, markedly in Brazil, Argentina, Colombia and Mexico.  One such event, called Caravana Americana, is now being regarded as the premiere show of its kind (Young 2017).

Designers presenting at such shows are very aware of the opportunity at stake, as well.  While American and European elites have long been regarded as the top consumers of high fashion, Latin America is already home to 591,500 millionaires, and it is projected that the region will have 841,100 millionaires by 2025.  Currently, about 100,000 more millionaires live in Latin America as compared to the Middle East, with the majority of those magnates residing in Mexico or Brazil (Young 2017).

Despite the slowness to adapt Latinos into the current fashion industry in the U.S., there is still hope that the group will wield increased influence in the coming years.  Although a few Western companies have started to open retail stores in a few malls in cities like Mexico City and Guadalajara, the overall reluctance to enter the market in Latin America is leaving emerging Latino designers and models to create and spread their unique styles throughout their home countries at events like Caravana Americana.  It is only a matter of time before fashion enthusiasts worldwide catch wind of their vision.